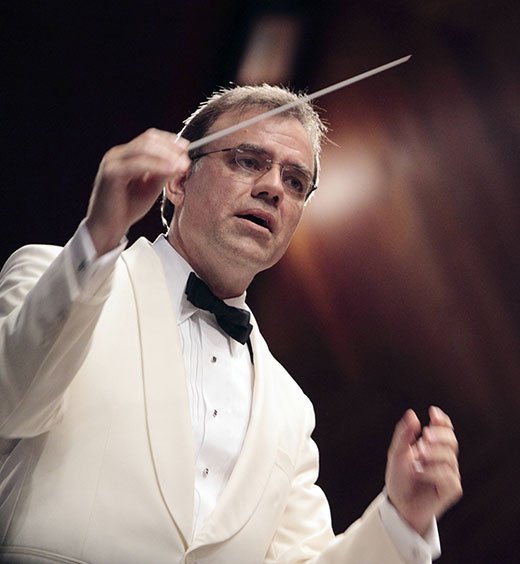 A concertgoer might be forgiven for thinking Independence Day was being celebrated two months late when the Boston Landmarks Orchestra finished its 2021 summer series on the Esplanade Friday with an all-American program. Because I had not downloaded the online notes onto my phone, I was glad to hear Music Director Christopher Wilkins’s account of his mixture of familiar and beloved pieces with nearly forgotten works by 19th- and 20th-century composers and one world premiere. One feature was new to me: an American Sign Language expert Christopher Robinson’s eloquent interpretations and gestures throughout the performance allowed deaf audience members sitting in front plainly to enjoy themselves, often swaying to the beat.[i]

Regrettably, I only heard the last minute of the sprightly opener Jubilee by George Whitefield Chadwick (1854-1931), Boston composer and onetime director of New England Conservatory, whose name is placed on the Hatch Shell. The orchestra played this vigorous “curtain-raiser” with panache and received a very enthusiastic response from the sizable audience.

Fittingly, one of Chadwick’s composition students, William Grant Still (1895-1978), referred to as “the dean of Afro-American composers,” penned the second work. It was a shame that we only heard two of the four movements of Still’s Symphony No. 2 “Song of a New Race.” Leopold Stokowski and the Philadelphia Orchestra, renowned for the sound of its strings, premiered the symphony. The BLO’s own strings brought richness and warmth to the first movement’s handsome main theme, and Wilkins caught its bittersweet quality, at once upbeat and bluesy. Principal players contributed elegant solos on English horn, oboe, flute, and clarinet. The third-movement scherzo offered slightly bawdy humor with its many melodic slides in the strings and woodwinds, and the audience particularly enjoyed this jaunty toe-tapper. As in the first movement, Still expertly fused jazz harmonies and syncopations with traditional classical symphonic form, and the performers enjoyed “wearing a different hat.”

In another logical progression, we proceeded to the composer and piece that almost singlehandedly put this fusion on the map: George Gershwin’s Rhapsody in Blue. The 25-year-old composer, not yet a master of orchestration, therefore mostly delegated that responsibility to Ferde Grofé for the premiere on February 12, 1924. Paul Whiteman conducted his Palais Royal Orchestra with Gershwin himself at the piano. Whiteman had devised an educational program entitled “An Experiment in Modern Music” wherein he juxtaposed jazz with classical music; Rhapsody in Blue came as the penultimate work, before the closer Elgar’s Pomp and Circumstance March No. 1. David F. Coleman gave an adequate but curiously matter-of-fact, largely uninflected account of the showy and expressive piano part. Admittedly, he was not helped by a mix that that rather inadequately spotlighted his instrument. The BLO’s players again relished the opportunity to show their facility in different styles: a special commendation should go to the principal clarinetist, whose opening upward glissando wail very effectively grabbed the chatty audience’s attention and set the jazz style convincingly.

Following intermission Wilkins and the BLO took us back to 1892 when the 17-year-old Charles Ives composed his organ piece Variations on “America” for a Fourth of July concert in Brewster, NY. Even at that tender age, Ives exhibited the iconoclastic tendencies that ultimately characterized his career.  The variations are at least as well known today in the orchestration by William Schuman, composer and former President of the Juilliard School. Wilkins’s direction imbued Ives’s precocious variations with their full range of affects: gleeful if volatile in the introduction, simple and reverent in the F major theme presentation (“My Country ‘Tis of Thee”), sly in the second variation (with help from Schuman’s scoring), deliberately disorienting in the bitonal first interlude (in F and D flat simultaneously), mischievous in the third variation (a brisk waltz in D flat), bracingly irreverent in the fourth variation’s F-minor polonaise (Schuman’s use of castanets, in a Polish dance, was an inspired touch!). Ives no doubt intended the final variation to be a satire of mindless organ virtuosity (he directed “as fast as the pedals can go”), something unachievable without an organ and intrepid organist; nonetheless, with Schuman’s creative scoring and the BLO’s expert playing, it retained a delightfully demented extroversion and thus seemed an organic extension of the previous sections.

Though Priscilla Alden Beach (1902-1970) was not related to Amy (Mrs. H. H. A.) Beach—whose name appears on the Hatch Shell—on the evidence of her short tone poem, City Trees, she is worth discovering. Beach received her master’s degree in composition from the Eastman School in the mid-1920s when European influence on Americans still reigned. Though one can detect in her writing echoes of Delius, Holst, and others, above all one hears a young composer establishing her own voice. The BLO and Wilkins drew an evocative sound-picture characterized by lush lower strings, murmuring winds, and rich brass, while images of the Esplanade’s trees in all four seasons appeared on the very bright video screens (courtesy of the Esplanade Association).

The concluding two works, though inspired by 19th-century leaders, spoke directly to contemporary Americans confronting threats to the body politic from within and without. The BLO, Christopher Wilkins, soprano Brianna J. Robinson, and mezzo soprano Carrie Cheron gave the world premiere performance of A Walk in Her Shoes by Francine Trester (b. 1969), a Bostonian who teaches at Berklee College of Music. Each of its five sections depicts a woman or place associated with the Boston Women’s Heritage Trail, and specifically the neighborhood of Dorchester. Robinson and Cheron, who traded off narrating and singing, proved very effective at both, enunciating with sufficient clarity that we almost never needed to watch the texts. For Geraldine “Deenie” Pindell Trotter, subject of the first section, was well educated, a determined activist, wife of William Monroe Trotter, and a longtime friend of W. E. B. Du Bois, Trester evoked nobility and dedication. Lighter, more playful sounds in the following movement portrayed Anna Clapp Harris Smith, the influential founder of the Animal Rescue League of Boston. A distinctive featured quote: “When we rescue animals, we too rescue ourselves . . . Kindness uplifts the world.” The subject of the third movement, noted humanitarian Alice Stone Blackwell, daughter of the famous suffragist Lucy Stone, also an unflinching advocate for women’s suffrage. The composer skillfully depicted her determination, yet left the section’s ending unresolved: perhaps an acknowledgement that even in 2021 work remains to be done. Going back to colonial days, the fourth movement’s Ann and Betty refer to two slaves buried in Dorchester’s oldest graveyard. Trester here conveyed uncertainty and pain but also reassurance. Finishing with a lighter tone, Clapp Farm refers to “the pear in Everett Square,” possibly the popular variety of the fruit called Clapp’s Favorite developed in Dorchester in 1849 and still sold today. It is not far-fetched to posit Trester’s use of a hybrid pear as a metaphor for the power of diversity and the American melting pot. Kudos to Trester and the BLO musicians for presenting this compelling score with such thought-provoking texts.

The patriotic evening finished with another beloved staple of the orchestral repertoire, Aaron Copland’s powerful paean to our 16th president A Lincoln Portrait, for orchestra and speaker.  While providing biographical information and famous excerpts from his speeches, the work also flows with lyricism and even engages in a bit of fun—the clipped quotation of Stephen Foster’s “Camptown Races”—but the preponderant aim of the Portrait is to depict the greatness and heroism of Abraham Lincoln. The narrator, David C. Howse, intoned the texts with authority and conviction, equaling that of the musicians. At a time when the country remains more divided than anyone living can remember, it made for an inspired choice to end the BLO’s 2021 Esplanade Series with a great work including such quotes as “. . . government of the people, by the people, and for the people shall not perish from the earth.” I imagine for many listeners this performance was a needed booster shot of confidence for the future. Received with thanks.

[i] The publisher talked to the group of four through the offices of a hearing practitioner of ASL during the intermission and learned that they had been totally deaf from birth. “It’s as if we didn’t have ears at all,” one of them signed. Lee then asked, “What do you then get from a concert?” One spoke quite plaintively about her early memory of feeling her mother singing a lullaby― in her breastbone. Another explained how the ASL interpreter was telling them stories that related his emotional impressions of the music, while also describing what instruments were playing. The four also wore devices that gave mechanical vibrations they could feel and flashing lights which also cued the beat.

Comments Off on A Booster Shot of Enlightened Patriotism