For its welcome return engagement to the Maverick on Sunday, the Catalyst Quartet began with the latest string quartet hit, Strum by Jessie Montgomery, herself a former member of the ensemble. This attractive, imaginative, and ingratiating little piece seems as though it is destined for the dance, and in fact I could imagine choreography.

Sorrow Song and Jubilee, the second work at Maverick be Libby Larsen this summer is fantasia on the spiritual “Swing Low, Sweet Chariot,” full of inventive touches and attractive ideas about what a string quartet can sound like. It scored a hit with the audience, and with this listener as well.

The first half concluded with Five Folksongs in Counterpoint by Florence Price (1887-1953), who has been attracting a lot of attention recently; and in fact the Hudson Valley Philharmonic will be offering her first symphony in the coming season. This music is a suite of elaborate and inventive settings of five songs, including “Sweet Low, Sweet Chariot” again, this time somewhat more recognizably. At 20 minutes, the suite definitely does not outlast its welcome; cheers and yells greeted its conclusion. Involved and vital playing earned much of the approval. 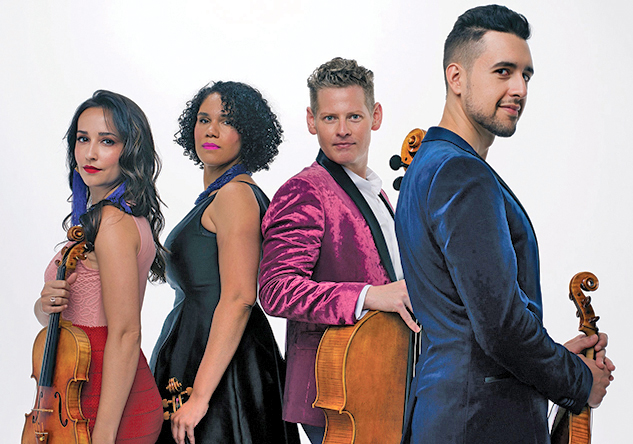 Israeli pianist Daniel Gortler brought back the 19th century to begin the entirely different second half, putting across Schubert’s Impromptu in G-flat Major, Op.90 No.3; Moments Musicaux No.3 in F Minor, No.6 in A-flat Major; and Hungarian Melody in B Minor, D.817 in a 19th-century style. By some contemporary lights, Gortler’s took exaggerated rhythmic freedoms, but his beautiful tone, and great sensitivity in dynamics and phrasing made a convert of me.

When the Catalyst Quartet joined Gortler for Dvořák’s great Quintet in A Major, Op. 81, for two violins, viola, cello, and piano, Gortler’s stylistic traits continued and seemingly prevailed; the strings broadcast on the same wavelength, and it was easy to hear, and see, that they were having great fun.

It’s treasurable when contemporary performers can bring back the 19th century in style. The Maverick audience obviously felt the same way, as the performance garnered the same kind of cheers heard after the Price suite.

Next Sunday the great Borromeo String Quartet comes. And Saturday night, another the Fred Hersch (Jazz) Trio promises great stuff for its fans.