An afternoon to gladden the heart of a Tanglewood administrator, waxed sunny and dry on the Sun’s day (a welcome change from previous weeks); the program consisted largely of Tchaikovsky (a proven audience favorite), and the soloist was Yo-Yo Ma (still more proven as an audience favorite). But in addition to these elements, which by themselves promised one of the largest audiences of the summer, two more items raised the concert event status. First was the one non-Tchaikovsky work, a fascinating score from the highly regarded young American Missy Mazzoli. And then came the first appearance of an exciting conductor, Karina Canellakis, leading the Boston Symphony. She had spent the summer of 2013 at Tanglewood as a conducting fellow; in the interim she has laid the groundwork for a major career, which currently includes roles as Chief Conductor of the Netherlands Radio Philharmonic Orchestra and Principal Guest Conductor of Rundfunk as well as many significant guesting gigs. Judging from the excitement she elicited from the orchestra on Sunday, and the enthusiastic reaction of the audience, we will be hearing a great deal more from her in coming years. 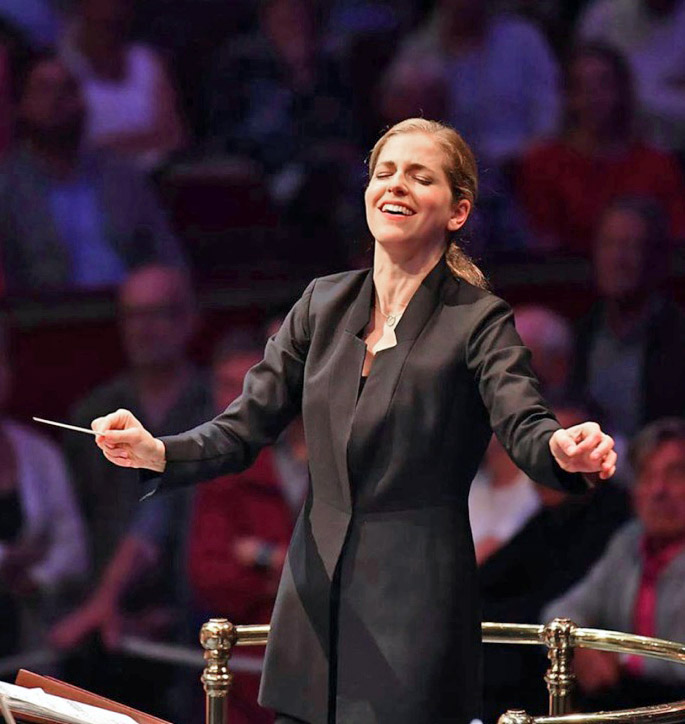 Mazzoli (b. 1980) is one busy composer, with an expansive list of concert music and operas. She composed Sinfonia (for Orbiting Spheres) for the Los Angeles Philharmonic and premiered in 2014. It calls for an orchestra in which many members played distinctly non-traditional instruments rather than their usual ones. The bassoons and most of the brass play harmonicas at approximate pitches (she instructs the players to stay in “approximately the same octave” as the others around them. This sets up a hazy sound, extremely quietly at the beginning, but building, with the rest of the orchestra, over 12 minutes of varied sonorities in changing textures and rhythms. The word “sinfonia” was commonly used in the Baroque era to refer to ensembles “sounding together,” as they do here with a fascinating ebb and flow.

Tchaikovsky’s elegant Variations on a Rococo Theme, is one of his several adumbrations of the Classical era. Yo-Yo Ma’s performance was, of course, nonpareil, and it was seconded by the Boston Symphony under the smooth direction of Karina Canellakis, who shaped the dialogue with the soloist with elegant flexibility.

It goes without saying that the audience would expect an encore from the soloist. He took a microphone to make several remarks apropos of the day—on the pleasure of music in a live situation again following more than a year of lockdown. He warmly invited applause for the conductor, returning to Tanglewood for the first time after the summer she had spent in advanced training here. Then he introduced his encore, a short, entirely pizzicato piece by Coleridge Taylor Prentice; as one of the most humane musicians on the current scene, Ma dedicated it to “…the memory of those we’ve lost, and on behalf of those in need.”

Tchaikovsky’s Fourth Symphony, the composer’s breakthrough, provides for an exceptionally dramatic and colorful canvas which Canellakis could fill for all it was worth. Her attention to every aspect of the score—color, balance, dynamics, tempo—whether in the more assertive outer movements or the poignant and lyrical inner parts was crisp and energetic, urging the brass of the “Fate” fanfare to threaten catastrophe, the folklike tune of the second movement to sigh pensively, or the interplay of strings, winds, and brass sectionalized in the third movement to chuckle slightly, made every moment of the piece come to life. Her clear gestures and facial expressions projected just what she wanted from the orchestra, and the BSO delivered in spades. The audience responded with extended cheers, as if already eager for more.