The youthful Viano String Quartet arrived at Shalin Liu Performance Center this weekend with its homemade name, its recent victory in the Banff International Competition, and its status as Ensemble-in-Residence at Curtis Institute of Music. Through an expertly mentored artistry Viano tamed Dvořák and American works.

What was it like going back from online to live concerts? Instead of looking at a screen in the safety of my studio, I was taking the socially distanced and masked risk of being there in-person. Various factors diminished this experience to par with concerts online. With the Shalin Liu’s stunning floor-to-ceiling window behind them, only silhouettes early on of violinists Wang and Hao Zho, violist Aiden Kane, and cellist Tate Zawadiuk could be caught by concert-goers [plans to install transmittance-controllable LCD panels for cutting glare apparently fell victim to cost cutting]. Later, when stage-lights came up as the overcast sky darkened, serious faces emerged from the shadows, though without camera angling, quick closeups or instant replay.

Viano led off with Jessie Montgomery’s string quartet hit, Strum. The sparse and semi-masked audience thundered its reception of the rhythmically charged work from 2006. No wonder the piece quickly lifted Montgomery into stardom and has since been widely performed. After their spectacular strumming performance, violinist Lucy Wang spoke about having wanted to get up and dance. There were piquant moments, too, and Viano’s gusto fit just right with Montgomery’s embrace of Black-American vibes.

The homemade name Viano “was created to describe the four individual instruments in a string quartet interacting as one. Each of the four instruments begins with the letter ‘v’, and like a piano, all four string instruments together play both harmony and melody, creating a unified instrument called the ‘Viano.’” (That’s violoncello for the cello v.) 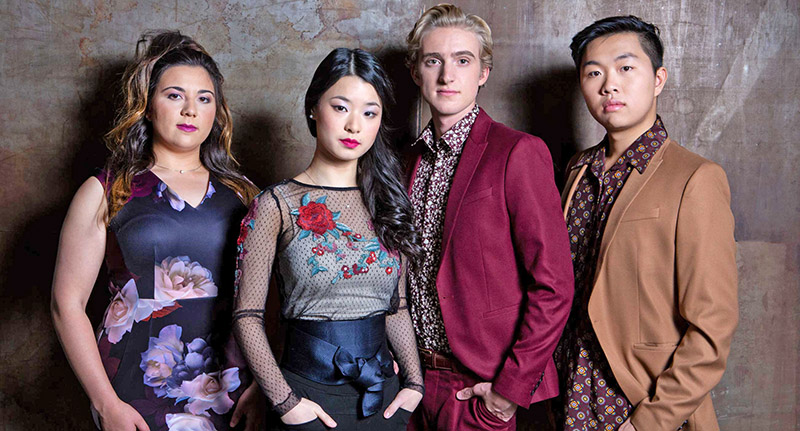 Unified they were in Florence Price’s now ever popular Andante Moderato from String Quartet in G major. Its Americanisms did not entirely survive. The African-American songs from church and dance hall everywhere in the short movement acquiesced, rather, to Viano’s exceptionally adroit take.

Artistic Director, Rockport Chamber Music Festival, Barry Shiffman, dressed down in Friday Casual, curiously contrasted the formal look and style of Viano. Welcoming words and thoughts about the music expressed in low key. Himself a violin-viola doubler, Shiffman remarked on the idiomatic writing for the string quartet by all the composers on the program, each of whom had played a stringed instrument. It was illuminating then to hear him describe the music of Pulitzer Prize winning composer, Caroline Shaw, as demonstrating superior craft.

Shiffman’s acumen was spot on for The Evergreen, Shaw’s 2020 string quartet in four movements: “Moss” as high-up harmonics; “Stem” as basic bowing; “Water” as pizzicato; and “Roots” as underlying ostinato. Shaw’s craft and Viano’s artistry was another fine fit. Where Montgomery’s Strum looked to life-like musicality, Shaw’s Evergreen required imagery, its movement titles only hints at life past fine surfaces.

Shiffman had also invited us to stay for ten minutes following the concert to ask Viano questions. Mine was: Are you still being mentored or are your performance decisions pretty much your own?

To wrap up their power-packed show, Viano continued with String Quartet No. 13, op 106, in G Major, Op. 106 by Czech master Antonín Dvořák, in its own particular brand of modelling. Does this “old” music demand updating, given flavors of the day, as in Shaw’s writing? Sounding more like an orchestra than a piano, Viano needs to tone it down, look to a broader range of expression, and concentrate less on exactness and extremes of amplitude. Their reading of Shalin Liu’s acoustics fell short, drenching us with too much sound, yet violist Kane offered moments of lyricism, and the quartet stirred passion in the third movement’s final run of the main theme and its quick directional shifts.

Comments Off on Viano’s Live Modeling at Shalin Liu