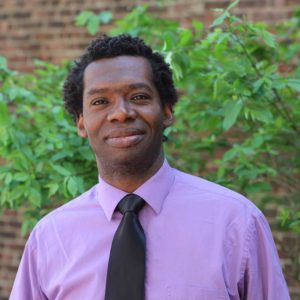 After watching Christopher Robinson signing during last Thursday’s Boston Landmarks Orchestra concert, we wanted to know more about his work. He was very nice about explaining to this no-nothing a little something about the importance of his role.

I saw you form a triangle with your hands. Are you narrating what instrument is getting the solo?

Whenever possible I physically make a reference to instruments or visual attempts of note equivalence with some other tangible instrument that I convey with my hands.  What I am able to do in American Sign Language that a spoken language does differently is conveying tonal inflection, perhaps vibrato and a sense of tactile texture and temperature of the composition of the piece that is being performed — it is subjective, yet heavily informed by dramaturgical materials provided to me by Landmarks staff, and of course essential conversations with Christopher Wilkins at rehearsals. Every Interpreter is well rehearsed, given all scores, and we are given access to all orchestral rehearsals whether in-person and through remote means. In this show I especially relied on Christopher’s expansion on how and why the evening’s selections were curated inform how and when I ‘amplify’ certain pieces. I asked Christopher Wilkins on the evening of the rehearsal, ‘how aware were the [Gershwin and James P Johnson] pieces of one another?’ The conversation that came from that question became a visual template for me to express in ASL the context and musical conversation that is happening within the music, and interaction that the pieces suggest as they have been curated together in the evening — as a full course meal as it were.

It’s hard to imagine why someone deaf from birth would want to attend a concert. Would your descriptions work better for individuals who have some hearing or have sometime in their lives been able to hear?

I choose not to address this question and I appreciate your respect of that in light of how I framed the beginning of this response and highlighted ableism*.

Did some of your subtle gestures get lost to people sitting in the back since there were no video screens?

Although I do not know whether or not any deaf or hard-of-hearing persons were present on Thursday evening, Landmark staff and attendees of these performances typically seat Deaf and Hard of hearing audience at the very front. There is an expectation that they come toward the front when they attend any ASL interpreted or open captioned events. In the past we have used large screens and projected ASL interpreters that could be seen by the entire Esplanade audience. This was for our event that celebrated the anniversary of Rev. Dr. King’s Speech at the Lincoln Memorial.

Was it hard to resist conducting?

I’ll tell you what’s hard to resist, it is hard to resist not breaking out into some performative dance in front of all that vacant space downstage center!

Practically speaking I am responding to what I’m hearing although my rehearsal with the orchestra and my own musical notations and translations have prepared me for what is to come. I do not jump the gun so to speak. I am being conducted in a way that is two degrees of separation from conductor Wilkins as the orchestra responds to him. It does not escape me however that the work that I do manually can appear to be like that of a conductor.

How about transcribing the whole of your description of Drums into words? Would it constitute a review?

This could be done but it would take several hours, days perhaps.

Do the features of American Sign Language that you use convey something that spoken language cannot?

I have yet to be able to answer this kind of question in a way that takes less than 2 hours, a glass of wine, and at least one hour of orientation with the person asking the question. Simply watching videos of some of the top Deaf American Sign Language artist and poets Douglass Ridloff, Peter Cook, Monique Holt (she worked with Landmarks several years ago), and Crom Saunders may be a good start.

The orchestra works with American Sign Language (ASL) interpreters as performers at select concerts. Rather than providing direct translation of the spoken word, interpreters communicate the feeling of the music and the remarks given during the concert.

This description centers the language of Deaf people and the artistry that the language is capable of rather than approach this work from the default ableist* lens that juxtaposes disability/deficit against  how one can experience classical music and the world of classical music.

This work is not done in a vacuum and it must always, always include the advisement of Deaf artist and the literature of Deaf artist. Sabrina Dennison, Kristin Johnson, Shana Gibbs and Monique Holt have all worked with BLO Interpreters to do this work. I cannot and will not do this work apart from them any more than the orchestra would perform without the leadership of the conductor. Deaf Artist agency must be centered in how this work is represented in this interview/review.

Christopher has practiced as a Performing Arts ASL Interpreter since 1994 and he currently coordinates ASL Interpretation for Boston University School of Theatre. He is a Certified Facilitator in the LEGO® Serious Play™methodology.

This unique collection of essays, accompanied by a pioneering DVD, at last brings a dazzling view of the literary, social, and performative aspects of American Sign Language to a wide audience. The book presents the work of a renowned and diverse group of deaf, hard-of-hearing, and hearing scholars who examine original ASL poetry, narrative, and drama. The DVD showcases the poems and narratives under discussion in their original form, providing access to them for hearing non-signers for the first time. Together, the book and DVD provide new insight into the history, culture, and creative achievements of the deaf community while expanding the scope of the visual and performing arts, literary criticism, and comparative literature.