For the final time this summer the tent on the Lawn of the Breakers Mansion hosted a festive concert, as the innovative string quartet Brooklyn Rider appeared Sunday with a modified version of its latest project-album “Healing Modes.”

Restrictions already in place regarding time limits for live performance necessitated the modification, inasmuch as Rhode Island remains under an executive order of emergency declaration through August 14th. Ensuing confusion resulted in several differing sets of program notes being distributed, but that did not take away from the immediacy of the moment and the concert’s message.

Dabke on Martense Street by Syrian American clarinetist and composer Kinan Azmeh opened. Azmeh appeared in a residency at Brown University in 2019, and as an active composer and performer balances jazz and classical styles with music of his native homeland. The dabke is an ancient form of Syrian dance characterized by foot stamping; Azmeh’s lives on Martense Street in Brooklyn. Minimalist in concept, Dabke on Martense Street was written for Brooklyn Rider in 2020. Its short, repetitive, Bartok-evoking motifs focused on smaller intervals to produce dissonance. Each instrument’s unique voice gradually blended into a single whirlwind of sound that drove to a stunning conclusion in this all-too-brief experience.

The Syrian element served to connect to Caroline Shaw’s Schisma, which focused on the Syrian refugee crisis in Greece, ‘Schisma’ being a Greek word for “cleft,” referring to the image from the Scriptures of the “cleft in the rock” that serves as a shelter from turmoil. In addition to its lyrical and sonorous lines, Shaw’s work also featured a variety of innovative sounds and techniques, including pizzicato strings joined by tapping the screw of the held end of the bow (called the frog) against the wood of the instrument and chords formed out of harmonics (overtones produced by lightly touching a string).

The exploration of border crises connected the foregoing to Mantana Roberts’s borderlands… Her graphic score gave a visual representation as well as an aural depiction of her researched data points regarding the US-Mexico border crisis and American immigration policy. Minimalist and mysterious, borderlands intermingled spoken words such as “borderlands” and “truth” with rhythms and sounds that included a wide variety of effects such as tremolo, plucked strings (pizzicato), slides, harmonics and using the bow to create a “creaking” sound akin to a door opening. These pieces challenged the mind as well as the ear, and even if one did not relate to it as music, borderlands sent a message.

Brooklyn Rider commissioned Shaw and Roberts along with three other composers, all devoted to healing through combining personal, symbolic and universal stories. The record album places these five works among movements of Beethoven’s String Quartet Op. 132 of 1825, itself a work of healing. Composing it after a long illness, the master named a movement “Heilige Dankgesang” (“Holy Song of Thanksgiving”) for his recovery. We heard the Beethoven uninterrupted to close the program. Here too, Brooklyn Rider challenged traditional interpretations. Their bold and innovative approaches developed from their belief that Beethoven remains “eternally modern” even while he looked far back into the ancient modes of the church, such as the professed Lydian mode of the “Dankgesang.” His celebrating not only his recovery from illness but also “the return of his creative powers” in many ways parallels our return from the Covid crisis.

Brooklyn Rider’s Beethoven, impassioned, bold and rhapsodic, almost gipsy-like with its unrestrained rubato, made liberal use of portamento (sliding upward, a common technique of string playing in the 19th century, now rarely employed), and adopted unusually brisk tempi. If the ensemble lacked tight cohesion on one or two occasions, their daring and refreshing new look at an old warhorse rewarded the risk taking. A brief look at a small bit of detail in the Scherzo movement (2nd movement) will serve to illuminate some of these observations. Beethoven opens the Scherzo with a three-note rising motive which at a later point displaces the accented note from the first to note to the second. Beethoven plays further rhythmic games with three notes, lengthening and shortening them, all to create a sense of enigma out of what normally would be a classically straightforward, if somewhat formal, rhythmic structure. Brooklyn Rider took that concept to a “big picture” snapshot of the entire movement, beginning in a more outwardly formal classical style associated the scherzo and trio movement, but gradually turned inward, the trio section emphasizing the drone of a rustic village dance, and the return of the scherzo theme far less formally stylized and noticeably more intimate in character. Equally daring the ensemble’s choice to take the Molto adagio Dankgesang at nearly twice the speed to which one is accustomed. After the initial jolt produced by such a brisk adagio, this listener suddenly reveled anew in the discovery of Beethoven’s beautiful counterpoint, and the natural slowing and calming of each phrase by doubling the note values. The foursome emphasized the arch-structure of the work in the final movement by the return of the brisk, bold, and sweeping sense that awed the ear at the very outset, enhancing Beethoven’s own transcendence of motives of the various movements into their final transformations in the finale. 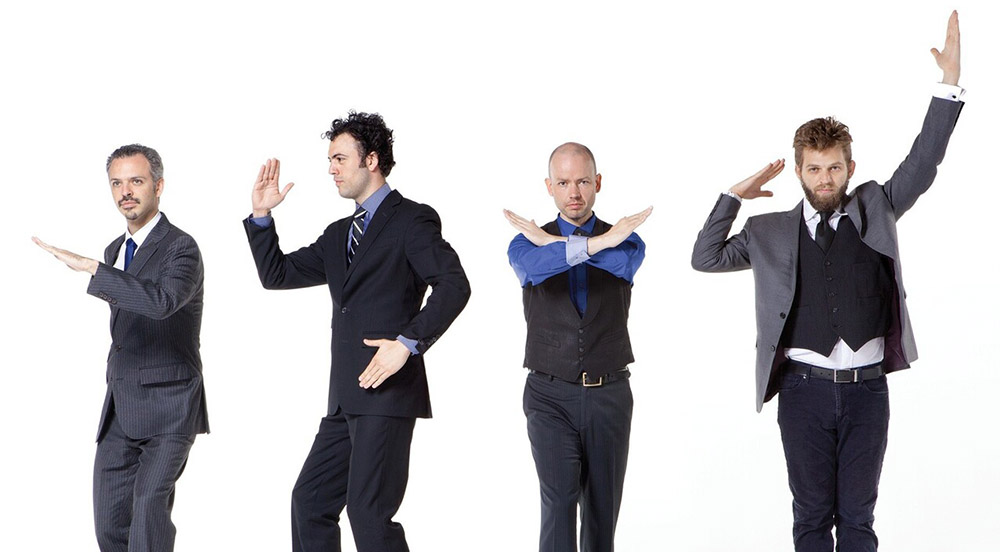 Though one concert remains in the Newport Festival, this will be my final review here, so some final observations about the festival as a whole and perhaps a glimmer into its future seem appropriate. Amidst leadership changes and pandemic closures, it is of tremendous credit to the long-running and historic Newport Music Festival, which began in 1969 and presented American debuts of no fewer than 130 artists in “the city by the sea,” that it could maintain an online and year-round presence during the Covid closures, while returning this year with a new director, a new vision, and new music. Executive Director Gillian Friedman Fox has established partnerships and collaborations with agencies and societies dedicated to Newport preservation, history, and restoration, creating venues in nature and historic public sites in an effort to create a more intimate experience, provide educational opportunities for children, and programming to reach a wider and more diverse public. A diverse group of performers emphasizing American artistic endeavors alongside masterworks performed to the highest standards characterize the new festival, and Fox looks forward to returning to indoor performances in Newport’s resplendent mansions, growing the audience especially to young people, and expanded programming throughout the year.