In 1806 — perhaps not insignificantly, around the same time Beethoven was working on his Fifth Symphony — the venerable Noah Webster published his first definitive (so to speak) work, “A Compendious Dictionary of the English Language,” in which we find the following definition:

By 1828, in his “American Dictionary of the English Language,” Webster had modified the definition to this far more intriguing one:

revelation, n. the act of disclosing or discovering to others what was before unknown to them

What does it mean to communicate a sacred truth? What did it mean for Beethoven? What does it mean for us, today, almost two centuries hence? How, in these so often cynical, shameless, post-truth days, can we truly “discover what was before unknown to us?” How might we experience musical revelation? After a year marred by incalculable loss, enormous public sorrow, and political chaos and confusion, these questions lingered in my mind upon conclusion of the Boston Symphony’s much-awaited return to Tanglewood on Saturday night, performing three heroic, potentially revelatory works of Beethoven.

Beethoven’s work is the musical embodiment of an Enlightenment-spawned worldview that values order, objectivity, and cohesion, logical development, and heroic, individual truthtellers (often called “artists”) who transcend and triumph over adversity. This is goal-oriented music, aimed at articulating the struggle and drama of the human condition, and its success relies on now-accepted standards of musical truth and beauty. But how do these truths hold up for us in 2021, in the context of public adversities unimaginable to Beethoven? Whither Beethoven, in the age of the Big Lie?

This evening’s concert posed one answer. From the opening dominant chord of the 1801 Overture to The Creatures of Prometheus, an edge-of-your seat anticipation practically pulsed from the shed. The BSO’s strings came loaded for bear, and tore through the first challenging 16th-note run like a team of synchronized toreadors, betraying a tangible desire to share the music with the assembled throng (noticeably more plentiful than the prior evening concert with the Knights), to “get it right” for the live music-starved. “How much we missed you,” cried out Nelsons from the stage. “How much we missed performing music together, and of course, sharing with you.”

Superstar pianist Emanuel Ax, one of Tanglewood’s most beloved guests, was born to play Beethoven’s Emperor Concerto. Dispatching every intricate detail and technical challenge of the work with ease and panache, Ax communes with this piece at a few levels beyond the intimate, perfectly deploying every trill, shading every line with color and specificity, and seeming to know what lurks behind the corner of every phrase.

Missing from the evening’s performance was any sense of Beethoven’s music being newly discovered or revealed in the moment. The “Emperor” Concerto and the Fifth Symphony are “orchestral wheelhouse” music — if I were to guess how many times these musicians and the collected members of the audience have heard these particular works, we’d reach into the hundreds of thousands. So — why another go?

I attend live music to hear human drama enacted onstage, to hear the process of musicians connecting through sound: struggles, triumphs, imperfections, moments of unexpected magic and transcendence. In other words, my own ears and expectations have been conditioned by a world in which Beethoven’s music has played a significant role. (To borrow a quote typically applied to Ol’ Blue Eyes, it’s Beethoven’s world — we just live in it!) But when interpretive musical decisions feel as pre-ordained (and at times, even process-less) as they often did on Saturday night, that much-desired, rarely-realized urgency of revelatory drama: “what’s going to happen next?” gets lost.

This is not (by any stretch) to say that the evening didn’t offer many exquisite moments of musicmaking. Ax might be the world’s most authoritative interpreter of this piece, and the BSO’s accompaniment sounded consistently sleek and assured. Enhanced by expert pedaling, Ax’s range of articulation ranged from fiery and hammering to delicate enough to pull a porcelain figurine from the top shelf without breaking it. It’s astonishing to behold how softly Ax can play the piano—particularly in the upper register—and still be heard clearly as a bell throughout the shed. Nevertheless, the dangers and pleasures of genuine risk taking and surprise went missing. (This is true particularly after experiencing such a palpable sense of adventure by an ensemble in the very same venue only 24 hours prior. See my review of the Knights HERE)

No longer should we play these works Because They’re Great, or familiar, musical comfort food for those already-in-the-know.

We ought to play them, and engage with them, because we have something new and revelatory to communicate through them that connects their essential aesthetics to our lives in the present moment, and because there is something truly at stake in our performing them that goes beyond generalized platitudes about how much we “need beauty and culture.” To position these works as a pleasant and familiar escape from our current tumult, or as a backward portal to a time that we (ahistorically) believe might have comforted us, is to strip them of their revolutionary essence and meaning.

With playing at this level, and when performers know this music so well, there is only one way to go, and that is in the direction of discovery and transcendence. The best way to play Beethoven is as if it’s contemporary music, as it of course once was, and this connects us to how fresh and radical this music must have sounded at its actual premiere. (Let’s not forget Beethoven’s radical alterations to the standard orchestra, which include adding bass trombone, piccolo, and contrabassoon in the fourth movement.) This performance showcased a Beethoven of supreme majesty and assertive confidence, and yet, dynamic contrasts and transitions between large-scale sections of the work often felt pre-scripted rather than authentically arrived at in the moment. I longed for drama and mystery, and above all, revelation.

I’m aware I may be asking for the realization of an impossible standard in the world of high-stakes classical enterprise. And we ought to express patience in every aspect as institutions return to a new normal. And yet, this is what thinking about Beethoven, and grappling with his music, prompts in so many. I fully recognize the subjective nature of my response as one among hundreds–let’s also note multiple, fully enthusiastic curtain calls for soloist and conductor–and yet something in this manner of this almost too perfect musicmaking left me wanting something less sleek, and more ragged, daring, and exploratory. 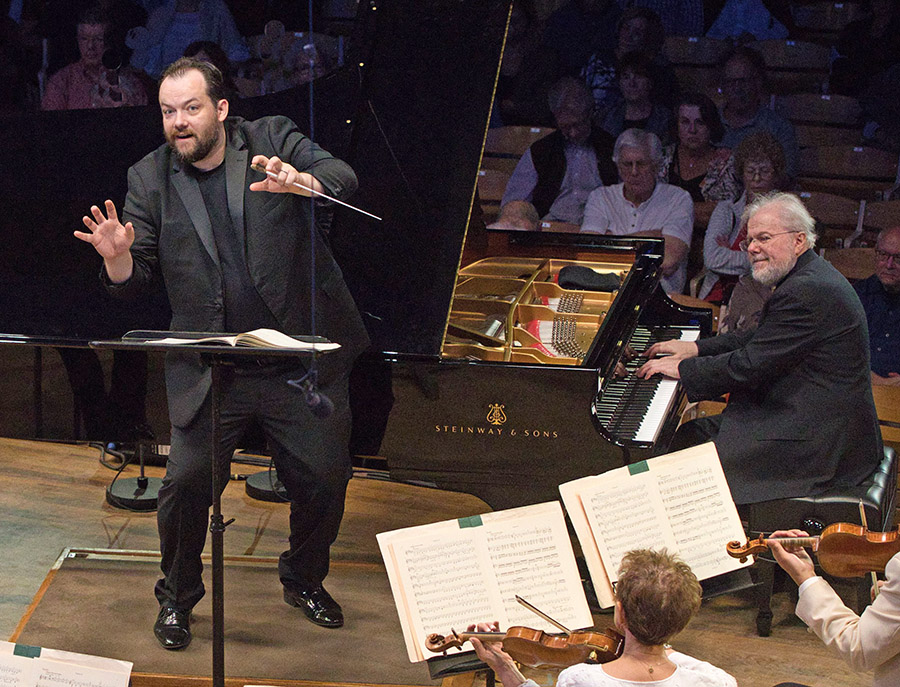 After a nuanced transition to the third movement, Rondo: Allegro, Ax began with instantaneous aplomb. The best way to play this section, with its rollicking and quasi-operatic dotted rhythms, is as a drunkard’s reckless cry. Here, we get a lot of Ax the Hollywood stunt driver, rounding curves and effortlessly executing flourishes, but again, I longed for more mystery, more tightrope walking. If I were to be granted the chance to conduct the Boston Symphony in any one of these works — and I assure you, there is about as much chance of this happening as there is my batting cleanup for the first-place Red Sox — I would implore the musicians, “You know this music, inside and out. Now, forget you’ve ever heard or played it before, and find the music anew every moment.”

Speaking of baseball, Nelsons’s introduction to The Most Famous Eight Notes in Western Music History felt rather like a what’s called a quick pitch, sans windup or preparation. Intriguingly, Nelsons rendered the second half of the phrase slightly slower than the opening, before we were off at a quick clip, horns offering bold attacks, and the tempo dropped noticeably for the first contrasting, lyrical theme. This movement should feel like a coil wound with extraordinary tension, let loose with exquisite control; the stakes and the tension must always be this high, because that’s where Beethoven wanted them. To some degree, Nelsons’s tempo fluctuations and taffy-pulling bits of extra drama from the ends of phrases detracted from inherent forward-driving motion and propulsion. The oboe cadenza stood as a much-needed tonic of human commentary amidst the commotion.

The second movement revealed Nelsons as a master sculptor of the long phrase and of ensemble balance. We got a lot of Beethoven, Master of Grand Gesture, with Nelsons’s drawing forward the composer’s serious and tender nature, but precious little of the jocular; Beethoven surely possessed humor and wit, though little went on display Saturday night.

The third movement picked up as if halfway through a story, horns recalling the opening of the first movement, creating a thudding and ponderous contrast to the underlaying strings and woodwinds. The world-beating BSO bass section launched the rumbling fugal section, simultaneously thunderous and nimble, while Nelsons conducted delicately, using only his fingers.

The transition to the fourth and final movement constitutes one of the most mysterious, magical moments in all the symphonic repertoire. (I once described it to a class as “God showing off!”) This gorgeous and full rendition sent us sailing us away toward some long overdue fireworks. The strings really laid in, helping to create the musical highlight of the entire evening. Finally the players seemed to be finding some abandon, playing like there’s something at stake. The oboe and flute duet before the final recapitulation was so lovely. One wants to hear this finale as an ecstatic rave, and we mostly got there. This majestic Beethoven can lead you through the pearly gates. The squeezebox accelerando leading to the final, exuberant brass flourish came off with precision, and it was impossible not to bop along, revelations or not.

Jason McCool comes from a long line of Irish men who have been asked, “Is that your real last name?” Originally from Brockton, MA, McCool completed his doctoral work in musicology at Boston University in 2020, writing a dissertation on Hamilton: An American Musical, and has been an Adjunct Professor of Music at Boston College since 2018. In October 2018, he was a Fellow at the Rubin Institute for Music Criticism at the San Francisco Conservatory of Music. He founded, curated, and produced the pindrop sessions classical(-ish) event series as a collaboration with WGBH and WCRB, and a local brewery, which ran from 2018-2020. Holding degrees from the Eastman School of Music in jazz trumpet performance and the University of Maryland in historical musicology, Jason also remains a proud member of Actors’ Equity, even if he only gets to act out on the page these days.