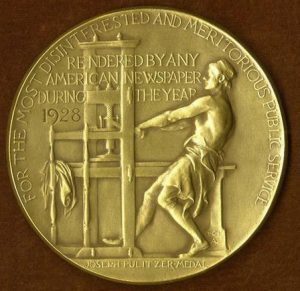 The Pulitzer Prizes were announced last Friday, with many honors for Boston-based journalists and Tania León (b. in Cuba, 1943) winning the 2021 Pulitzer Prize in Music for her New York Philharmonic commission Stride.

The 15-minute orchestral showpiece premiered at David Geffen Hall on February 13, 2020; it is the second piece to be premiered from the New York Philharmonic’s Project 19, which commissions 19 women to compose works marking the centenary of the 19th Amendment (which gave American women the right to vote). HERE. For short interviews with the composer, to see the prize-winning work in rehearsal, click HERE.

The American Academy of Arts and Sciences in Cambridge, MA inducted Léon on October 5, 2018 and the Harvard Wind Ensemble, premiered her Cumba Cumbakin in Boston on March 6, 2010.

The Music Prize has been awarded since 1943. African American composers have been increasingly honored with the Prize in the last 25 years for such notable works as Anthony Davis’ 2019 opera Central Park Five; Kendrick Lamar’s 2017 song collection DAMN.; Anthony Threadgill’s virtuosic 2016 In for a Penny, In for a Pound, Ornette Coleman’s 2006 Sound Grammar; and Wynton Marsalis’ Blood on the Fields, premiered at Yale University in 1997. George Theophilus Walker (1922-2018) was the first black American composer to win the Pulitzer Prize for Music for his Lilacs for voice and orchestra, premiered by the BSO in February 1996.

The BSO under Thomas played Wilkins Walker’s Lyric for Strings, a single movement developed from his String Quartet No. 1, recently at NEC [HERE]; the Boston Pops essayed I under Keith Lockhart (2019) HERE. It will be included in the highly anticipated Newport Music Festival debut of the New York-based Harlem Quartet on Friday, July 9th (7:30 pm, Tthe Breakers Lawn) along with William Grant Still’s Lyric Quartette, Tomeka Reid’s Prospective Dwellers, Wynton Marsalis’s At the Octoroon Balls – String Quartet No. 1, and arrangements for quartet of the music of Gillespie and Strayhorn.

Comments Off on Announcing Honors For Black and Women Composers