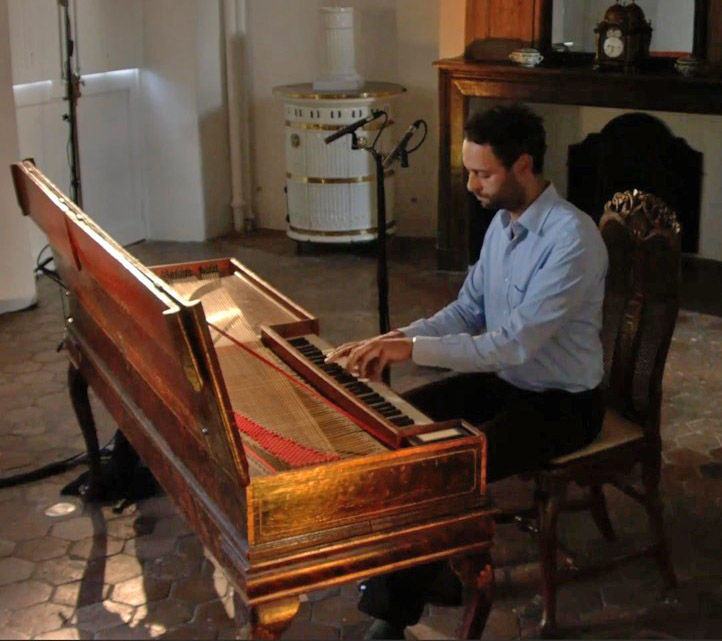 From the Musée de Provins et du Provinois, just south-east of Paris, to the enchanting accompaniment of distant birdsong, Benjamin Alard offered five works for the clavichord, beginning with a prelude and a chaconne by German keyboardist and composer Johann Caspar Ferdinand Fischer. The prelude, as John McKean observed in his useful notes, follows the stylus phantasticus; its constant arpeggiations signal this popular “fantastical style.” A prelude (BuxWV 163) by Dieterich Buxtehude came next. Although Buxtehude is best known today as an organist and this prelude seems to fit the organ,  performers in Buxtehude’s time used the instrument of their choice. It would be hard to find two keyboard instruments farther apart than the clavichord and the organ, but Buxtehude’s writing for hands alone made this contemplative prelude easily adaptable.

Alard finished with two works by members of the Bach family, a sonata (BWV 964) by J.S. Bach and a set of variations by C.P.E. Bach. The sonata is a transcription of one of Bach’s own violin sonatas (BWV 1003). In four movements, it is a textbook sonata da chiesa, following the form of adagio prelude, faster fugue, evocative, slower andante, and allegro finale. C.P.E Bach’s 12 Variations über die Folie d’Espagne, H.263 completed the program. Bach started with a strikingly simple tune reminiscent, as the title suggests, of the Spanish dance La Folie. The dance melody was well-known at the time, largely via Corelli’s similar treatment in his earlier set of variations, Op. 5, No. 12. Here, Bach engages in substantial transformations of the theme, using a range of rhythmic and technical devices as well as a fair share of ornamentation. The variations end with a bang, a suitable finale to a first-rate performance.

Throughout, Alard played with sensitivity suited to the nature of the Baroque Affektenlehre, found across the program. But when paired with his exceptional virtuosity, Alard also excelled at the later Empfindsamer Stil, encapsulated in C.P.E. Bach’s variations, and overcame Buxtehude’s technical challenges with flair.

Alard performed on a 1763 clavichord by Hamburg instrument-maker Johann Adolf Hass in the possession of the Musée instrumental de Provins. As Alard clarified in a pre-concert conversation with the founder and the curator of the Musée instrumental, the choice of a Hamburgian clavichord was deliberate, as Buxtehude and both Bachs had connections to the city. This clavichord is bundfrei (unfretted), using only a pair of strings per note, leading to a lighter and richer sound than the earlier gebunden, or fretted, variety. This clavichord is significant in the history of the instrument, as it was one of the first clavichords to be restored and copied, in the 19th century by Arnold Dolmetsch (who briefly built period instruments for Boston’s Chickering & Sons, no less!), helping spark a revival of interest in early music. In addition, the clavichord has original decorations on the lid, depicting a group of Chinese musicians. This exoticist element is more common than might be expected, as clavichords were a regular gift of Western missionaries and diplomats. There is even evidence that clavichords were a regular part of Chinese courts during Hass’s lifetime. [1] 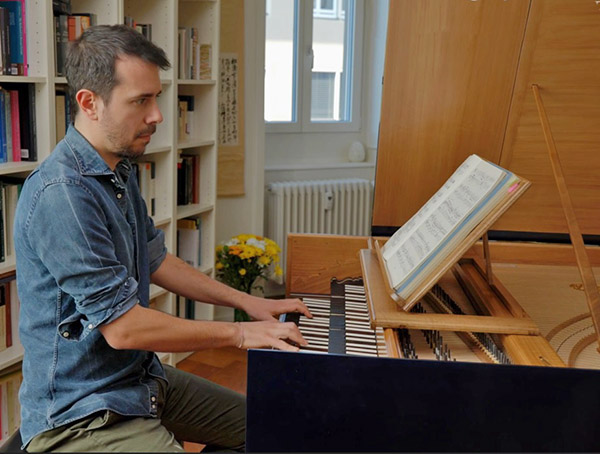 Francesco Corti followed shortly after in his cleverly titled “Streams to Bach,” a program of works for harpsichord written before and by J.S. Bach. As Corti wrote in his accompanying notes, Bach was heavily influenced by his predecessors, studying and copying their works. Placing Bach in conversation with these composers, then, provides a fascinating look both at the history of early keyboard music and at Bach’s personal style. In particular, hearing these influences humanizes Bach, breaking through his veneer of pure genius. The performance was recorded in Corti’s home in Basel on a modern, double manual instrument by Andrea Restelli modelled after German manufacturer Christian Vater’s 1738 harpsichord.

Corti first presented a series of shorter works, beginning with Heinrich Scheidemann’s Pavana Lachrymae, WV 106, an adaptation of John Dowland’s work for solo lute. Scheidemann was far from alone in adapting Dowland’s original; he was joined notably by Giles Farnaby and William Byrd. While Byrd’s version is the most well-known, perhaps due to its sensitive treatment of the tune, Corti’s sympathetic playing allowed Scheidemann’s attempt to rival Byrd’s. Corti followed the pavane with three pieces by Johann Jakob Froberger, a Toccata (FbWV 102), Ricercar (FbWV 410), and Canzon (FbWV 306). Corti explained that Froberger’s studies with Girolamo Frescobaldi in Rome lent his music a decisively Italian flavor, replete with, in his words, “harmonic audacities and rhythmical oddities.” Corti then performed Johann Adam Reincken’s Suite in C major, a short, polyphonic set of dances connected by melodies quoted across movements. Although Reincken is little-known today, he was significant for Bach; the two met and Bach adapted a sonata by the older composer for keyboard.

Johann Kuhnau brought the program literally to Bach’s doorstep, as he preceded Bach as director of music for the town of Leipzig. Corti performed Kuhnau’s Sonata Seconda in D Major from his 1696 Frische Clavier-Früchte. The work summarized many of the stylistic and formal innovations of its predecessors, both in this program as well as Alard’s.

Corti finished with Bach’s familiar second French Suite in C Minor, BWV 813. Even if, as Corti argued, Bach was not an innovator, the suite was an apt choice that combined elements from various national styles, especially Froberger’s Italian approach and aspects of the French school. In seven movements, all in C minor, Bach displays an exhausting range of technique and affect. Of particular note are the charming opening Allemande and the cantabile sarabande.

During the French Suite, Corti brought a welcome introspective nature, befitting the minor key nature of these remarkable dances. Like Alard, Corti played with sensitivity, especially suitable for carrying melodic lines through the dense counterpoint in much of the program. During his pre-concert lecture, Corti stressed the significance of playing a German-style harpsichord for his Germanic program and his brand-new instrument stood up well to the forceful arpeggios and fast runs. 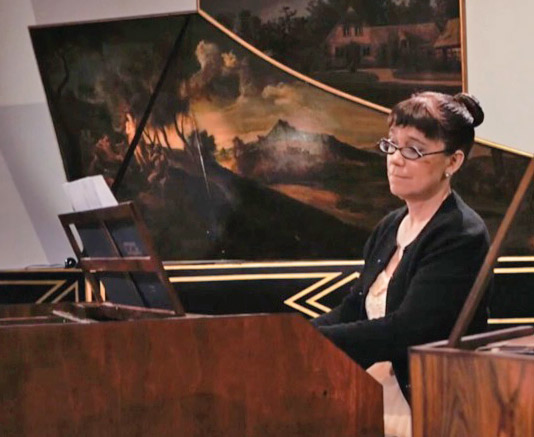 Carmen Leoni closed with an all-sonata fortepiano concert from Lavagna, Italy, successfully advocating for an instrument too often overshadowed by its successors. Like Corti, Leoni performed on a modern reproduction, hers from 2005 by Paul McNulty after Walter & Sohn, the Viennese fortepiano manufacturer used by Mozart.

Leoni started with three one-movement sonatas by Scarlatti, K. 3, K. 213, and K. 16. All three come from his Essercizi per Gravicembalo, a collection of thirty sonatas published in 1739. Leoni also drew the title of her program, “Lo scherzo ingegnoso dell’arte,” (The Ingenious Joke of Art), from the preface of the Essercizi. She programmed these miniatures as if they constituted a single, modern multi-movement work, with K. 213 akin to a slow movement contrasting with the éclat of the other sonatas.

Leoni turned next to Haydn’s three-movement Sonata in D Major, Hob. XVI/37. In her words, the last movement dialogued between a “strong, little bit angry” character and its “weak and shy” counterpart. Mozart’s Piano Sonata No. 13 (K. 333) from 1783, finished the program. To hear these six sonatas sequentially spoke to remarkable transformations—from a single movement to the multi-movement sonata and sonata-rondo forms—of the genre over the course of the 18th century.

Throughout, but particularly in the opening Scarlatti sonata and Haydn first movement, Leoni was a forceful performer, showcasing the dynamic and expressive range of her instrument. But, when needed, Leoni was also graceful, tenderly caressing poignant melodic lines. Paired with the una corda pedal, this musical chiaroscuro especially provided new insights to the Haydn sonata, highlighting his jokes and sudden contrasts (and Leoni only added to the effect with some delightful acting). She had a surprise, firecracker of an encore up her sleeve: Muzio Clementi’s Waltz, Op. 38, no. 9, played here thankfully without the original tambourine and triangle accompaniment. She dispatched the rapid, energetic scalar runs with aplomb, a joyous finale for the entire mini-festival.

All three keyboardists, virtuosos at the heights of their careers, showed unmistakable expertise on their chosen instruments. Thanks to sound engineers Alban Moraud, Oren Kirschenbaum, and Stefano Malvasio, respectively, each concert sounded crystal clear, with similarly faultless video. As quieter instruments, the fortepiano, and especially the clavichord required and received knowledgeable audio production. The three illuminating pre-concert lectures provided both background to the works and instruments as well as elucidation of the performers’ decisions. During these lectures, as well as in the middle of some performances, beautiful shots of the instruments and local surroundings complemented the music most charmingly. If the rest of the BEMF is this superlative, it will be a festival for the ages.

This triptych runs online until July 11th, with access available HERE. The free pre-concert lectures can be viewed  HERE.

Comments Off on Keyboards Evolve for BEMF