The Cambridge Symphony Orchestra, led by music director Cynthia Woods, joined forces with the City Ballet of Boston and the Youth Ballet of Boston for a lavish streamed production of Tchaikovsky’s Sleeping Beauty.

Ivan Vsevolozhsky’s scenario, in three acts and a prologue, loosely derives from the brothers Grimm. While much of the narrative is familiar to audiences weaned on Disney’s 1959 version, this main action of this tale takes place over a century instead of a few days and convolutes the straightforward love story: Princess Aurora, our hero, does not meet her beloved before falling asleep. The evil fairy Carabosse curses Aurora to 100 years of slumber after the princess pricks her finger on a spindle. Shortly before Aurora’s 16th birthday, Carabosse weasels a spindle into her hand, and she falls asleep, along with the rest of the kingdom. At the end of the allotted time, Prince Florimund awakens Aurora and the rest of the courtiers. The ballet ends with a royal wedding, attended by family, friends, and a host of familiar faces from other fairytales, including Puss in Boots and Little Red Riding Hood.

Unlike for his famous Nutcracker, Tchaikovsky took well-founded pride in Sleeping Beauty. While Tchaikovsky’s complete score takes well over two hours to perform, the CSO’s clever cuts removed repetitive sections and shortened some of the longer dances, coming in at less than half the length of the original but maintaining the complete storyline. Many orchestras settle for the short, posthumous orchestral suite, but that only works when dancers aren’t involved. Instead, the CSO found a happy medium, preserving the work as a ballet while avoiding tiring audience and performers.

The prologue and final act, both set in the palace, were filmed in the fittingly enchanting grand ballroom in Boston’s Fairmont Copley Plaza Hotel. The ballroom’s glass chandeliers, detailed columns, and vast, vaulted ceiling evoked the Hermitage or the Alexander Palace. But the majority of the ballet was danced outside, giving the production the air of a true fairytale. On the grass, between two flowering trees with a grand forest behind, dancers could remove their facemasks and show animated facial expressions. Thankfully the uneven turf caused no injuries! 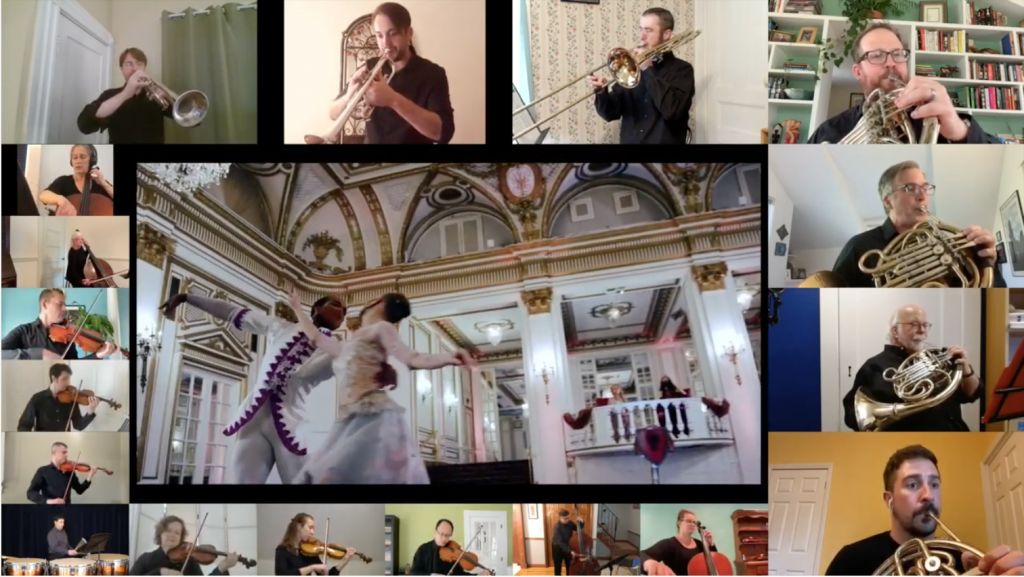 The dancers wore excellent costumes by Lambe and Ruth Whitney. Their approach to facemasks, often an obstacle to fashion design, was ingenious. For example, the lilac fairy wore, alongside purple dress and gloves, a lilac facemask, aesthetically completing her costume rather than acting as a requirement to be overlooked. Children would be the first to recognize Carabosse’s intimidating headpiece, which was reminiscent of Maleficent, the 2014 Disney retelling of the story.

In order to show the many performers involved, the CSO created a picture frame of musicians around the ballet dancers. As the instrumentation changed, so did the instrumentalists, a technique reminiscent of their recent Holiday Pops concert. At that performance, this seemed an ingenious compromise, but the many changes of size and location of the main ballet image as well as the smaller rectangles, made it difficult to know where to look in this context. This problem was only compounded when dancers occasionally appeared in the border, muddying the division between dance and music. A more streamlined approach—at the very least, keeping the dancing in the exact center—would have made the performance easier to follow.

But throughout, the orchestra was consistent and balanced, thanks in no small part to the post-production team of William Whitney, Jay Frigoletto, and Owen Ross. This season, Cynthia Woods and the Cambridge Symphony Orchestra have demonstrated an innovate approach to multi-media performance, breathing new life into established masterpieces. Sleeping Beauty was no exception.

Comments Off on Awakening Sleeping Beauty