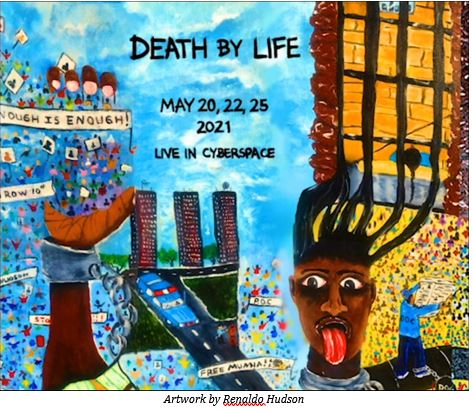 Here are the givens: The American prison system is broken. Many inmates are wonderful human beings. They are trapped by an unjust system and do not receive the opportunity to achieve their potential. To hear the stories, the words, the music, to see the artwork of those who are on the losing end takes a step towards achieving cultural embrace. To celebrate the power of a warm, accepting community in the face of a power-hungry minority is to achieve a social revolution; to do so with artwork is frequently a productive tactic.

In this sense, White Snake’s Death by Life contributes something valuable, as it shares the personal stories and original artwork of real inmates who find themselves desperately stuck in a wicked system. I appreciated the gesture.

This was no opera, but rather, a homogenous mass of conversationally inflected arias and repetitive choruses rising to no detectable affect. And it entirely unmatched the powerful subject matter that the opera’s synopsis promised. Certain interludes did present enjoyable moments of gentle hymn-like reprieve. These choruses — “The Chorus of the Incarcerated” by Eric Blackmon — acted as dividing checkpoints between the chapters of the opera. Sustained chords, rich in triadic harmonies and lushly orchestrated for the supremely capable and resourceful Victory Players, bathed listeners in an ambiance of restraint, patience, and a sad but glowing soreness. Although these refrain sections, which separated each scene and ended the opera, were pleasantly orchestrated and especially well performed by vocal soloist Naomi Wilson, clarinetist Eric Schultz, and the Oakdale Community Choir, the texts and music of the arias, which sounded more like very long recitatives, gave more the impression of hammering solicitation than a provision of topical exposure to an under-attended sociological deformity, which I feel is what the opera’s producers intended.

The overture vividly presented sequential still-shots of visual arts accompanied with new songs sung by the Oakdale Community Choir. I found the artwork provocative of deeper thoughts on complicated problems. Like the rest of the opera, these pieces do not suggest pointed solutions, but unlike the opera, they did supply proper exposure to a dizzying accumulation of pain, struggle, and hope. The choir provided two dimensions of enhancement. First, they seem the most authentic representation for their particular issue. Community art must not separate audiences from performers; rather, it begs complete participation. The issues, the art, the topics addressed in these songs ask us to consider ourselves involved, and by appreciating this performance, we do. Second, the choir performed from a heartfelt depth.

This brief overture felt complete in itself. The rest of the oppressively redundant show continuously made the same points. If the authors had intended to immerse us in the agonizing and relentless sensations of the prison life, perhaps the concept succeeded. I can see no other reason for drawing out something like the “bird shit aria” — ripe as that image is for poetic analogy — to nearly 20 minutes without any significant musical development.

White Snake’s last operatic production, Alice in Pandemic came across much more effectively [my review is HERE]. Its animated avatars that corresponded to characters made for highly impressive and visually arresting results. In Death by Life most of the scenes appeared little more than Zoom backgrounds applied behind human performers. Even a rough, homemade, or quasi-staged presentation would have been more comfortable to watch. These lingering virtual enhancements have lost their novelty since the time of Alice in Pandemic’s premiere, now supplying only distraction. However, the montages of layered images over Naomi Wilson’s tasteful interludes (“The Chorus of the Incarcerated”) seemed to reveal artistic intention in these incorporations of technology.

Despite feeling disappointed with Death by Life, I support White Snake’s vital contributions to essential community interactions. When in-person performances return, I look forward to joining these conversations on under-discussed and unresolved topics.

Eric Hollander is a PhD candidate in Musicology at Brandeis University. His research is focused on musical realizations of poetic texts and oral traditions.

Comments Off on Death or Life or Whatever