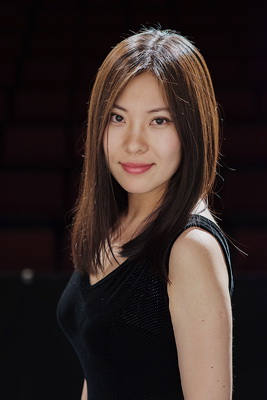 Xiaopei Xu is one strong pianist. Friday night at the Gardner Museum she took a chisel to a range of pieces and delivered incised, everywhere lapidary performances of Bach-Liszt, Schubert-Liszt, Price-Lo, Gershwin-Wild, Schubert, and Waller. I have heard Xu twice before, in very different venues, producing rounder and softer tones, and this evening was so sonically different that I had to question traditional assumptions about pianos, rooms, furnishings, and about her (and other pianists’) ability to hear themselves in space, a skill that grows with performance experience, obviously.

The BU DMA student, born 1992, commenced with an exemplary, as in could-hardly-be-improved rendition of Liszt’s transcription of Bach’s S.542 Fantasy and Fugue. I swear: in all of my hours spent at Bach organ recitals I have not heard better rhythmic strength, voice clarity, and drive than this. Yes, I realize a piano is not an organ—tracker or electropneumatic— and Xu does not have to play notes with her feet. Nevertheless, with Bach playing like this, she placed a prominent marker.

In the sparsely populated Calderwood space this evening — with so few people in attendance, it is at once dead and hard, and of course was designed for great clarity from the getgo — the d’Arbeloff Steinway sound was not like anything you, or at least I, have ever heard, even when playing. It also was unlike the same instrument under different fingers with a normal audience. Loud and bright, fully bloomed, gorgeous with utterly piercing treble, piercing in the rare good sense, I guess: it was a sound spectacle. Some rugs on the floor would have been an awfully nice idea.

More Liszt recasting ensued, with transcriptions of Schubert’s “Der Müller und der Bach” and “Gretchen am Spinnrade.” Xu may not be a natural for this composer; her playing, while often lovely and with attempts at quiet, slightly lacked songful arc and shading and bend of phrase. One notices such chiefly because so much fluent Schubert playing is to be had now.

Florence Price’s powerful song “Resignation” (“My life is a pathway of sorrow …”) received its own highly imaginative embellishments, indeed a paraphrase, by Xu’s colleague, the pianist and improviser Chi Wei Lo. The beautiful result even featured effective soft vocalizing by the pianist. (Alas, Lo felt the need to add his own words to Price’s printed lyric, not a good idea in general and specifically not these of his.)

Earl Wild’s own Lisztian, filigreed transcriptions of Gershwin’s “Embraceable You” and “Fascinating Rhythm” wanted to swing a bit more, although they did have some. You have got to convey that sweep no matter the lacery and tracery. But I was able to pocket my kids-today sermon about young classical musicians needing to spend a weekend dancing and clapping to “Higher Ground” and pianists in particular profiting from a masterclass with Marcia Ball.

In the Schubert A-major Sonata D.959 Xu did aim at song and dynamic weather, and succeeded more often than not and more than before. Yet again it tended to the hewn and pointed, the leading lines samy and loud but unshapely. The sonata is so otherworldly in its powers that it triumphs with a range of treatment, even x-ray. Still, a brick on the soft pedal would have been welcome. Xu liked a dry touch, with little sustain or length of arc, and Schubert’s wack eruptions made for some wincing where I sat. Savor of forward flow, tragedy and wistful moodiness, these seemed not her goals this evening. In the Scherzo, Schubert’s vivacious sprites had big feet and carried blades.

Regardless, I want to listen to it a second time online, and not only to see how the piano output fares when recorded. One striking aspect of the recital was that the big bright presentation appeared without Xu ever banging, or even pushing, the instrument.

There oughtta be a law about no encore after “late” Schubert and similar. However, if you simply must, then Fats Waller’s “Viper’s Drag” is one good way to end. Xu may not have been fully dirty, nor quite spooky enough, but it’ll do, and she did.

Comments Off on Brilliant Clarity from Xiaopei Xu