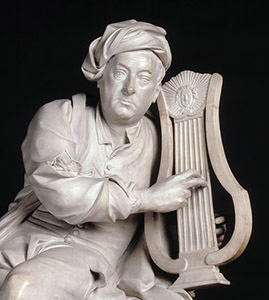 We identify with readers for whom Handel’s (then Händel’s) La Resurrezione evokes no associations. According to the Emmanuel Music publicist, the brilliant oratorio, or semi-opera, which traces the mystical events that occurred between Good Friday and Easter, premiered during the Easter season of 1708 in Rome in an elaborate staging: “The young Saxon Georg Friederich Händel dazzled with his colorful orchestration and vivid storytelling.”

On May 15th, YouTube will begin transmitting stage director Nathan Troup’s theatrical resurrection from the dark recesses and commanding architecture of Boston’s Emmanuel Church. Read Ellen Harris’s informative essay “An Easter Extravaganza” about the work and the composer in the era before he lost his umlaut. Emmanuel Music’s YouTube link is HERE.

FLE: Why did you choose this particular piece, and how did you work with Nathan Troup in coming up with a dramatic visual concept.

RT: Ten years ago Michael Beattie introduced me to this early Handel oratorio. I’ve always been enamored with Handel’s works from his time in Italy when he was in his 20s — such imagination exploration, testing the limits of his performers and creating orchestral colors unheard of. Oddly enough, with no chorus, it always seemed too modest for our audiences. In the pandemic, it feels extravagant!

Regarding the dramatic visual concept, that was really all Nathan’s vision. Having worked with Nathan on our Britten chamber series, that we filmed in the sanctuary and chapel, I found that Nathan brought to life the dark corners of our sanctuary. I’ve always been enchanted by the Emmanuel’s Land window and thought that could be a stunning and fitting backdrop for the Resurrection story, as Handel’s characters seek truth and light, as are the four virtues depicted in the window [even though it’s hard to see in the nighttime recording sessions].

With Handel, it’s not always clear whether what’s oratorio, cantata, or opera. This work has all those elements. Tell me how you break them down.

Handel, at his foundation, was always composing theatrical music. La Resurrezione blurs the line indeed. It has often been referred to as a “closet opera” and the reason is quite simple: in Rome in the early 18th century opera was completely forbidden. In 1697, Pope Innocent XI had Rome’s sole operahouse torn down and forbade any kind of performance because of the “immorality” these works so frequently portrayed. But the cultured Roman nobility, with their elevated literary societies, always looked for ways to avoid papal incursions on their interests, so the marquis commissioned Handel, who had already at age 20 written three operas, to disguise an opera as an oratorio. Handel’s music and Capece’s libretto begs for, and is well served by, minimal staging.

There are lots of da capo arias. Will some of them go on too long? Will there be any cuts?

We have made only one cut — a secco recitative. Do the da capo arias go on too long? I certainly don’t think so. This is where the staging enables a character to be changed, to evolve in the da capo so that there is dramatic intent.

Handel is a great recycler. Which arias in this piece found their ways into others possibly more familiar?

Perhaps the most familiar recycled aria is “Ho un non so che nel cor,” sung by Maddalena at the end of Act I, which Handel uses not only note for note but also word for word in Act I of Agrippina.

For the premiere, the orchestra apparently had 39 strings. Is that because there are lots of divisis or simply because they needed to make more sound to fill the room?

There is unique divisi: sometimes three independent violin parts and in one aria four independent violin lines. We used a smaller string section of 7 violins, 2 violas, 2 celli, and 1 bass, and it serves Handel’s music and our space quite well.

And do you expect to have a lot of input at the extended mixing sessions when it’s determined which mikes are stressed and which images are chosen?

Yes, I have just finished reviewing all the takes of each scene (usually two, in some cases three) and have chosen the best musical option and offered some input on balance. Our recording engineer, Tom Stephenson, is such a pro and very much used to the Emmanuel Music ensemble (he was a bassoonist in it for many years) and familiar with the space. I leave the image choices to Nathan.

Tell us about Michael Beattie’s coaching sessions over Zoom with all the different singers from their homes.

Michael Beattie’s coaching of the recitatives was invaluable. He is our principal harpsichordist and extremely gifted and experienced Handel vocal coach and conductor, and his work preparing the singers brought efficiency and sophistication to the rehearsal process and musicmaking.

How did you prepare?

FLE: Nathan, you are making some sort of cross between a music video and a staged concert recording of a religious story within a sacred space, but there’s no stage, no proscenium arch, or any thematic connection between any of the visual elements in Emmanuel Church and Handel’s story; the commanding Last Supper reredos isn’t illustrative, and the gorgeous Land window hardly even shows, because you are filming mostly at night.

NT: We’ve prepared for and are creating a real theatrical experience with an infrastructure that includes a lot of instruments and a team to make it work. When imagination is provided resources, the results can be transformative.

I understand that you’re going to have many, many microphones and multiple cameras to produce this show. Will there be any live mix, or will you be laying down all the tracks of all the microphones and all the cameras so that you can edit and mix later at your leisure? Who is going to be making these decisions on shots and the mixing and are you going to change the sound mix to go with the video mix, so that when you have long shots it sounds different from when you have closeups and so on? Who makes the decisions and how much arguing is there going to be?

Hopefully, there won’t be any arguing. It’ll all be recorded in real time, so we’re not facing issues with little lip synching, like in some other projects that I’ve done. We’re using a top sound-design team, which is completely cognizant of maintaining the energy that exists from capturing singers singing live in time with the orchestra.

When we did the Britten Chamber Series back in November part of the goal was to capture that adrenaline of a live performance so that an audience can see the thrill of what it’s like to be in the space among the players.

We have a talented team of sound engineers and we choose to rely on them for their sound design and not their ability to edit and fix any of our mistakes. The goal of this project is to rehearse and record like this is a performance and preserve the theatrical sense. That means doing just a slightly different coloration from making a movie version. So you’ll see an edited dramatization of things happening in real time, captured close up, but we’ll also be able to see interactions from a distance, as if you were sitting in the audience at the time of the performance. We’ll have multiple cameras and camera operators capturing the action at multiple angles. We’ll record in segments (about 30 minutes each) and plan to do each scene twice so that we can reevaluate what was captured, make any adjustments or improvements, and then run that material again. The consistency and reliability of this ensemble become a major asset for a project like this.

Then what we have captured goes into the hands of the editor. He brings a personal sense of artistry in combining what was happening in the room and the details of who we want to see at any moment. Since the space is filled with a completely realized version of this production, there’s plenty to take in.

It’s similar to the art of supertitles—timing, tempo, font, and size all matter. That takes a sensitive skill, to make those details matter, and ultimately is all the difference. The post-edit process provides a space for us to finesse the flow and aesthetic at which we’ve been aiming. Our process here challenges us to convey on a single screen the immersive theatrical experience and hopefully resolves the questions, “How do we allow for intimate moments amidst a large theater space or stage? What moments do we want to ask the audience to savor? What contributes to the experience that exists in the negative space? How much do we show reaction shots?” These questions are what will help us sculpt our clay into something formidable.

Are you using a poetic translation or a literal one?

But in some modern opera productions, that means completely rewriting it.

We’ve not rewritten anything in terms of adjusting the narrative or adjusting something to match this specific production. There’s a moment in the second act between Angelo and the two Marys during which the text suggests women in particular are accountable for the unfolding of the events the past few days. The text, in fact, leaves room for interpretation, so instead of changing something to avoid the “difficult conversation,” Pamela’s savvy translation combined with the performers’ thoughtful and thorough characterization allows for us to use the text as a way to actively reexamine, reevaluate, and potentially reframe those uncomfortable moments, moments that would otherwise be avoided by ignoring them, which is a lot easier to do.