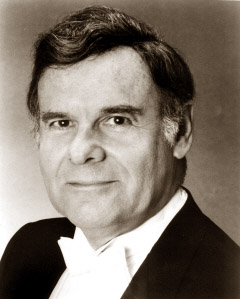 Today brought news of the death at age 94 of Martin Bookspan. Fresh out of Harvard and after three years announcing on the University’s WHRB, he became a founding announcer for a newly established classical radio station in Boston. I first heard him there in my seventh or eighth year.

For the price of a return stamp, the burgeoning WBMS would mail a tiny program listing, printed one or two weeks ahead; that’s how I learned of the broadcast of Firebird that frightened me [see my posting HERE]; I was also intrigued by a mysterious listing, something by Ravel I didn’t even know about: “Concerto for the Left Hand.” I won’t forget a piano melody that introduced Martin Bookspan’s hours on WBMS; he didn’t identify it, and it wasn’t until years later that I finally learned it was: Beethoven’s Bagatelle in E-flat Major, op. 33, no. 1. But that gentle, authoritative announcer’s voice remained in my memory for more than 70 years as a firm anchor to classical listening. Station WBMS didn’t last very  long in the competitive AM market, maybe up to about 1949 when LP records started appearing; Bookspan himself eventually went to New York, WQXR, and “Live From Lincoln Center.” In the 1990s I met him in person, at the New York Philharmonic, or at a meeting of the American Musicological Society. He smiled warmly when I recalled WBMS. Then I reminded him that my father-in-law, Wilfred Mirsky, had been his Hebrew-school teacher; he hadn’t forgotten that, either. “Brought classical music to many,” the Globe’s obit headline read, and for some, that meant the beginning of a career as well.

Brian Bell’s 2016 conversation with Bookspan led to the engaging three-part BSO feature HERE. It includes what is probably the only one-on-one interview with Serge Koussevitzky.

Listen to Bookspan’s memorable radio voice in his interview with Artur Rubinstein in 1963 HERE,