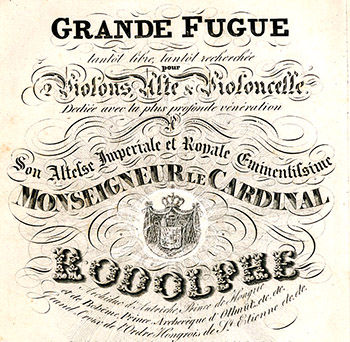 Notwithstanding that Beethoven had mounted a successful and indeed monumental challenge to the fugal legacy of J. S. Bach, the fugue as a musical genre — we can even call it a form — was already rapidly dying off as a subject of interest for composers by 1800, except perhaps in sacred choral music, where the form remained viable (the final “Amen” in the Gloria of the Mass Ordinary, for example). Beethoven’s fugues in op. 106 (“Hammerklavier”), 110, 120 (Ninth Symphony), and 131 are all triumphal, decisively enlarging the scope of what Bach left, but they are also culminant. Nobody else dared to try very much for a while, at least, in the 19th century. Schubert occasionally indulged — in the Mass in A-flat Major, D 678 (two versions), in the finale of the F Minor Fantasy for piano four hands, D 940, and a few isolated examples which are all rather dry and “old style,” notably in the clumsy fugato finale of the otherwise magnificent “Wanderer” Fantasy, op. 15, D 760 — an example of “a composer who has lost his way,” as Robert Bailey put it.

After Beethoven, the fugue is a special case for most composers. For instance, did you know that Chopin wrote one? It’s a short piece à 2, from near the end of his career, and nobody ever plays it, but it’s quite good. There’s a bravely vulgar fugato in the last movement of Berlioz’s Symphonie fantastique, a ride in Hell, where it belongs. But the Offertory (Domine Jesu Christi) in Berlioz’s Grande messe des morts (Requiem) is a unique masterpiece, and a very strange one at that — the fugal texture is entirely in the orchestra, and the choral role is restricted to an ostinato of two notes. Mendelssohn, who wrote a lot of Lutheran music, regarded the fugue more affectionately, in oratorios and organ sonatas. I don’t know any fugues by Weber and can’t even imagine a fugue by Wagner. (But consider the famous psychologist’s dichotomy of instinct for “fight or flight” — the end of Act II of Meistersinger, which embodies the opposite pole of the Latin fuga (flight) in one of the most extraordinary instances of cumulative mad counterpoint ever penned; it’s not a fugue, it’s a fight, everyone piling on one after the other, and there’s nothing like it in all music.)

Schumann stands astride all of these post-Beethoven figures, fugally speaking. There are fine fugatos in such completely non-Baroque works as the Piano Concerto, the Second Symphony (slow movement), and the Piano Quintet, but only a few formal fugues, such as the Four Fugues for piano, op. 72, which are interesting for their subjects, all of which sound as though Schumann had almost borrowed them from somewhere else: Bach’s WTC Book I B-flat minor fugue and C major unaccompanied violin sonata, Chopin’s Trois nouvelles études no. 1. There are also Four Fugues, op. 60, on the name of B-A-C-H for organ or pedal piano, and these are expansive pieces, more than merely academic or ecclesiastical fare. [Listen HERE to a two-year-old 4-hands version.] {Canonic digression: In this same connection I was alert to a remark in one of my favorite books, Ernest Hutcheson’s The Literature of the Piano: “It is remarkable that [Schumann’s] canons are superior to his fugues; he had an exceptional talent for the more difficult form,” calling attention to the Six Studies for pedal piano, op. 56 [listen HERE on a pedalier composed of two 9-foot Faziolis], which are all effortlessly and beautifully canonic. They don’t sound that good on the organ, and few today own a pedalier — nor indeed did many own one 150 years ago, which is why Bizet, and later Debussy, took it upon themselves to arrange these really good pieces. Debussy’s arrangement is for two pianos (1891), with the advantage that the canonic parts are distributed antiphonally between the two instruments, with impeccable skill. Bizet’s arrangement is for one piano, four hands, and the secondo-primo score, on left-right pages, can be summoned on IMSLP HERE. {I can supply PDFs of four-stave systems for those who want both parts on the same pages.}

It is said that Verdi, to keep his hand in, wrote a fugue every day for 20 years, but I don’t believe that anyone, let alone a great composer, could subject himself to such a drab discipline. (One reason not to believe it is that no examples seem to have survived.) But Verdi certainly knew how to write a good fugue; there are two of them in the Requiem, and the end of Falstaff is a big but beautifully proportioned vocal fugue on the text of “All the world’s a joke, and man is born a fool.”

Brahms once wrote, “When I do not feel like composing, I write some counterpoint.” This kind of mental-flossing might have consisted of exercises in 16th-century stile antico, dull enough, but it paid off in wonderful fugues in the German Requiem, one of them (in Part 3) 37 measures long entirely over a tonic pedal, the other in the Resurrection chorus (Part 6), with a form that is hard to analyze — somewhat like a double fugue with three subjects, as in Bach’s memorable “St. Anne.” These are fugues that elevate a sacred style in choral music; outside of that milieu, Brahms’s use of fugue doesn’t avoid a certain heaviness of purpose, as in the [25, too many] Variations and Fugue on a Theme of Handel, op. 24, an early work. Another early Brahms fugue, in A-flat minor for organ, is wide-ranging tonally and has a tonal answer with the subject in melodic inversion; it seems as though he wanted to make it more complicated from the start, as an exercise. So it’s not surprising that the fugue disappeared in Brahms’s work as he matured. There were other varieties of contrapuntal invention that he wanted to explore, as in the Variations on a Theme of Haydn, op. 56, unsurpassed in invention, melodic elegance, and sheer joy, but needing no formal ratification with a fugue.

The modern “symphonic” organ was born in France, and its first great propagato,  César Franck (1822-1890), loved Bach but developed his harmonic idiom in the wake of Liszt, and only relatively rarely brought forth fugues of his own; the ones that everyone loves are the Prelude, Fugue and Variation for organ or harmonium (later for harmonium and piano), and the Prelude, Chorale and Fugue for piano. There’s a stately fugue in the D major String Quartet (1889) that will remind you somewhat of Beethoven’s Opus 131. Franck’s Belgian contemporary, Jaak Nikolaas Lemmens (1823-1881), who was Widor’s teacher, wrote a funny “Fanfare Fugue” in his Sonate pontificale; the subject is entirely made up of notes in the tonic triad. Saint-Saëns, like many good church organists, also wrote fugues, but his successor at the Madeleine, Fauré, with a pellucid sacred style, wrote none that I know of. Later French composers embraced the fugue d’école as a pedagogical device. This was a strict form full of specific requirements (episodes, stretti, pedal point, etc.). Claude Debussy, studying at the Conservatoire, wrote an impressive example that doesn’t sound much like Debussy. The theme, by Massenet, comes from the back of the standard text by André Gédalge (1901), who was Ravel’s teacher; Ravel learned well, as you know from the lovely fugue (the only one he ever wrote) in Le Tombeau de Couperin (1917). You can hear the well-schooled rigidity in the last movement of Saint-Saëns’s “Organ” Symphony no. 3, and more freely in the second movement of an actual organ symphony, No. 1 by Louis Vierne (1899). A later treatise on fugue d’école is by Charles Koechlin (1933), who nevertheless happily and brilliantly parodied the whole fugal aesthetic in his “monkey scherzo” for orchestra, Les Bandar-log (1940), which contains a canon in five simultaneous different keys. One remembers also the English composer Ebenezer Prout, who wrote a large book, Fugue (1891), again with specific structural requirements; it was soon pointed out that not even one of the 48 fugues in Bach’s WTC conformed to those standards. He is remembered today for providing texts to all 48 fugue subjects — I have those in a file somewhere. But fugue (or sometimes canon-and-fugue) is still considered a useful subject for college courses, and Ph.D. candidates at some schools are still required to produce a fugue as a rite of passage.

Fugal pedagogy did not reside as strictly in the German-speaking world, but the heaviness remained. One who kept the tradition all too reverently was Max Reger (1873-1916), some of whose massive counterpoint is still cherished by organists today; his intent was to recover the spirit of Bach by peering backwards through the lens of an entire century. His orchestral Variations and Fugue on a Theme of Mozart, op. 132, culminates in a five-part fugue on an eight-measure-long subject, surmounted by the pristine theme from Mozart’s A major Sonata, K. 331, for full brass. Reger’s logical 20th-century disciple was Hindemith, who wrote cleaner fugues of smaller dimensions. One notes also the Triple Fugue that concludes Act II scene 2 of Alban Berg’s Wozzeck (1922); this mad scene is a fine portrait of official insanity (Doctor, Captain) coupled with confounded realism (Wozzeck), three disparate subjects in all. When Berg undertook to compose this opera, this scene was the first thing he wrote.

There’s more to say about the fugue in the 20th century, as an illustration of obsolete classicism that refuses to die, but I’ll visit that another time.