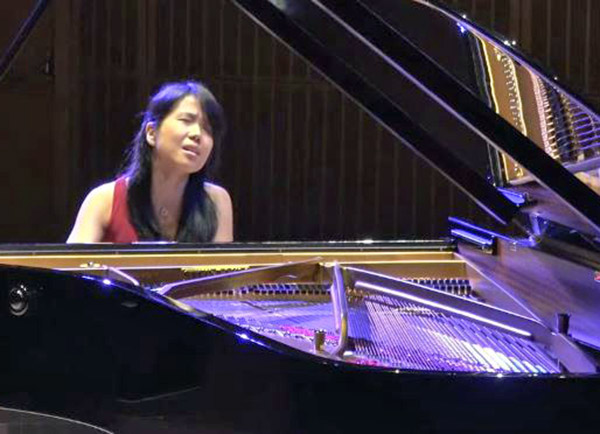 It was a great pleasure to hear pianist Kate Liu perform for the Chinese Foundation for Performing Arts at the Gardner Museum’s Calderwood Hall, even if well after the fact, and on YouTube [HERE] rather than as one of the nine people who experienced it in person.

On YouTube, you can find a number of her astonishing performances at the 2015 International Chopin Competition, where she garnered 3rd Prize, establishing at a young age a rather considerable resume. On March 20th at the ISGM, she included two of the Chopin works she had offered in different levels of the Chopin Competition: the Fantaisie in F Minor, Op. 49, and the Polonaise-Fantaisie in A-flat Major, Op. 61. Her recent concert also included another Fantasie, Schumann’s in C Major, as well as his Arabeske, and the Handel keyboard Suite No. 5 in E Major, HWV 430 that opened her recital.

Throughout, Liu’s music making was seriously serious, solemn even, and super sensitive, with power, richness, and a deliberateness that brought Emil Gilels to mind. She shows calmness, even at full power, and chooses a dutiful and respectful approach over a playful one; an occasional touch of ennui sets in (a good thing). There is also a strangeness to her manner, at least on this night, raising some questions about tempo, weight, time, rubato, and momentum, particularly in the slow sections of all of the works save the Handel.

Liu’s opened Prelude to the Handel Suite sweetly and romantically. The introductory bars had an odd rhythmic inflection, though, before the movement unfurled with sweeps of sound, a musical dialogue between the two hands. The Allemande, more rhythmically grounded but equally sweet, felt tender. With the repeats came a welcome mini-abundance of Liu’s added ornaments. The Courante contrasted nicely, with Liu’s articulated jabs of much faster and different sound—more brittle—a much-stylized little “dance” here, where, with the exception of the end of each of the two sections, there is no break in the spilling forth of eighth notes. Nicely done! A much greater spilling forth came with the Air, with its fetching and popular tune, and set of variations, with a rhythmic accretion of notes through to the final variation, a study in scales. All delivered deftly, balanced and a little hypnotic, what with all of Handel’s near relentless repetition and Liu’s evenness of execution.

The Chopin Fantaisie opens “Grave” with a descending motive built on a dotted rhythm (reminding us of Chopin’s obsession with funeral marches, though this iteration is more mysterious and hardly funereal). Lui’s take on the opening section was unusual in that she de-emphasized the role of rhythm so much so that the music more or less floated forward, not wholly grounded, but wholly effective, more ethereal than dark. Her playing was expressively slow, particularly at the end of phrases. Even more so at the end of sections. She provided almost enough space for a coffee break between the octave fermata and the beginning of the short middle “Lento” section, where, again, Liu experimented with time, attempting to suspend it, but inevitably succumbing to its pull, as all of us must.

But, backing up in time…the music becomes more frenetic after the opening, the dotted rhythm giving way to triplets in a slow-starting roller-coaster motif, and by the time Liu has reached the agitato (bar 68), she was full steam ahead, and the grand (incredibly difficult) outward expanding octaves to follow were just that, grand, with a massive, defiant sound, leading to that fabulous hopping, happy march (bar 127) that (like most of the material in the work, except for the opening march material) is repeated once or more.

Throughout this Fantasie and the concert, Liu’s slow tempos stretched, often to extremes, while moderate and fast tempos were on par with standard interpretations. Near the remarkable end of the Fantaisie, when the final roller-coaster motif comes to a screeching, chromatic halt, it’s as if all the mass of the piece then becomes absorbed into five progressively quieter and higher iterations of a gentle arcing motif. Marked “sforzando,” it seemed that Liu couldn’t possibly play more quietly or slowly when she still had one note left. But quieter it was. And a superb performance it was, too.

As was Liu’s take on the Polonaise-Fantasie, which unfolded as if gradually waking from a dream, dotted rhythms being introduced with triplets in an oddly chromatic and harmonically meandering series of bars, leading to a polonaise rhythm (bar 22) and the first lyrical theme moments later, itself an expansion of the odd dotted rhythm/triplet material from only moments before. I wish I could have seen her hands here. From the chordal left-hand writing, she projected a lyrical bass line with her little finger to counter balance the pleading melody in the right hand. Gorgeous stuff. The pleading theme is developed, morphing into the grand polonaise tantrum, which Liu aristocratically delivered before one of Chopin’s most innocent and sweet polonaise melodies emerged (bar 66) with ascending and descending scale lines. This material, too, builds to various reveries and (civilized) tantrums, taking us to the lovely middle section in B Major (bar 148).

Lui was expectedly slow here, but not exceedingly so, emphasizing the base line ‘cello melody,’ which is somehow more forthcoming than the right-hand melody, the latter showing Chopin at his most intentionally static (he’s toying with us, that Chopin). We’re reminded of the slow sections in Chopin’s Scherzi. But suddenly new material seems to come out of nowhere in the form of a dark tiny Nocturne (or slow Waltz? bar 182), which Liu took ever so slowly and quietly, with super expressivity. This helps explain the Fantaisie part of the title of the work, though it could also have been called: Polonaise-Nocturne-Mazurka-Scherzo-Waltz-Fantaisie-Impromptu. Or PNMSWFI, Op. 61.

The ‘nocturne’ itself encapsulates a gorgeous, dramatic trill section, a brief return of the cello melody, and an abbreviated return of the opening, before launching into an impassioned return of the first lyrical melody and a huge coda, one that turns the peaceful, static middle section on its head. That Chopin! (I warned you.) Leave it to him to turn that sweet cello melody into a dotted rhythm series of power octaves under an enriched, now impassioned melody above. How could anyone put all this together in any coherent performance? Better ask Liu. She did. She did it while delivering what was one of the longest interpretations on record, at 17:38, if my math is correct. The average time for a performance is 13:10, a rather significant difference.

Her Fantaisie ran 16:10, compared to an average of 13:40. That’s some serious stretching of material over time, too. But Liu seems to live in these works (or vice versa), which may also help explain how she can also get away with much shorter length interpretations of each of them, as she did several years before.

I’m afraid I can’t say the same for her Schumann Fantaisie, which clocked in at 43:00, as opposed to a 30:00 consensus (though Marc-André Hamelin put down a 35:00 version). The opening theme and its reoccurrences could have used less vertical power and more horizontal flow and tapering of musical line, and in Schumann’s intentionally blurry (a good thing) and buzzing left hand some notes stuck out, curiously, almost like odd micro-syncopations. Also, excessive rubato in the circle-of-fifths “Im Tempo” occurrences knocked the music, or some of us listeners, off kilter. That said, most of the first movement sounded thrillingly beautiful.

In the 2nd movement, again, there was too much evenness of vertical force, and consistently, without due consideration to temporal metrics. The 16th note chords, octaves, and notes were rendered with mostly the same weight and power as their dotted eighth, on-the-beat counterparts, making for heaviness, and a dragging effect. Many of the dotted note arrangements turned out more as triplets. It all got rather herky-jerky, too heavy, and dense. The odd thing is, this had to be intentional, because this manner is more difficult than executing the shorter notes/octaves/chords with less emphasis. An interesting matter of interpretation. In any case, the movement wore me down. And then, why the strange, huge ritard to end this not-slow movement?

The final movement gave us much to love; poignant and expressive, it dished out all-round lovely sounds and tender musical gestures. But it stretched beyond a certain comfort zone. It felt as if the music was struggling to push forward, rather than flow forward. Sisyphus came to mind, and as we arrived near the end, I couldn’t help but conjure that cliché image of the cowboy who just won’t die. I suspect that some of this drama and exaggeration may have worked better in-person than on YouTube. Sadly, I was not there.

BTW- Just before the Schumann Fantaisie, Liu delighted us with Schumann’s Arabeske, a tender reprieve from all the evening’s big drama .