How music can be made fascinates, beguiles and more. No surprise the Council for the Arts at MIT and Cambridge Science Festival engaged in funding and hosting respectively.

On the music front, comic saxes’ juxtaposition with chants of “Drill, baby, drill” seemed made for TV. Wither Away might have served as amplifying Stanford University’s “Singing Sun” posted on the Internet years ago. Mandala’s immersive sound design might have gotten lost through lesser quality headphones than mine. Postnuclear Winterscenario No. 10 made a human touchdown with its funereal footsteps and real saxes.

On the video front, saxes in virtual darkness surrounded the sun; a small, stark lit-up red EXIT took us to Stevens’s basement, while one by one, saxophonists appeared in their own environs. Watershed revealed a laptop performer reacting physically in contrast to a decidedly focused quartet of laptop performers remaining stoic.

The one-hour concert would remind of John Cage’s going to star maps and a myriad of other data and processes in reimagining music.

Jonathan Nangle’s Mandala for alto sax and electronic delay (world premiere of the arrangement) is about “Expanding circles of iridescence, a mandala is a geometric configuration of symbols.” Minimalistic like riffs turned subjects, as in fugue or canon, stretch to imitations and mockups. These circles concentrate on “spatial sound design” while omitting electronics. To end, fadeout.

Jacob TV writes about his Postnuclear Winterscenario No. 10 for saxophone quartet, “shortly after the Gulf War broke out, I felt speechless and unable to compose. In the media, meteorologists predicted apocalyptic consequences for the climate and the environment, similar to the effects of a nuclear war.” Neat visuals coordinated effectively with the slow moving, motivically conceived work. A more familiar and attractive harmonic netting, along with a dynamic performance by the JPSQ, evinced feeling. Sax cries, sighs, and, finally, thick, isolated chords bearing down as in a funeral procession addressed wanted humanity. 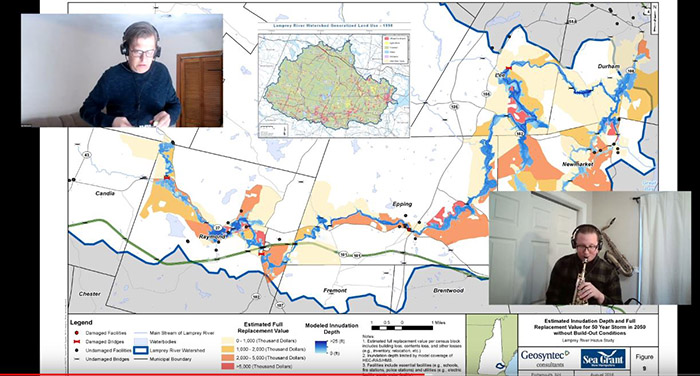 David Stevens and Ian Hattwick, together, presented Digital Environments for saxophone quartet and laptop performers (world premiere). JPSQ joined with the MIT Laptop Ensemble with Grace Smith, Jerry Zhang, Josh Verdejo, Qiantan Hong, directed by Hattwick. Stevens writes that this work is “based on climate data from the four hometowns of our quartet members.” The visuals, eight performers together with computer graphics, only bewildered, leaving this listener wondering how learning more of the inside story might have proved instructive.

Streams HERE for some time to come.

Comments Off on Saxes & Electronics Propound on Environment