Even within a narrow chronological and geographic scope, Old Post Road nevertheless found an impressive amount of contrast and variety. The concert began with Louis-Nicolas Clérambault’s Trio Sonata “La Magnifique,” a delightful work completed around 1704 and played here by Stumpf, Darling, Ryan, and Henriksen. Cellist Ryan provided a brief (perhaps too brief) introduction to this sonata as well as the other pieces. As he described it, “La Magnifique” was the “earliest and Frenchiest” work offered, with Clérambault’s frequent ornamentation representing contemporary French compositional norms. In six short movements, the sonata gave the musicians ample chance to show off their individual techniques. A joyful gigue followed by the final stately allegro were the twin highlights of the work.

Cassidy joined the ensemble for Telemann’s Quartet in D Major, TWV 43: D4, published in 1752. In four movements, per Ryan, the Quartet was the “most Italian-style” on the program. The work is familiar to fans of Old Post Road, as they recorded the Quartet for an album several years ago. Telemann’s inclusion in this concert might not be obvious, with his German career and this particular piece’s Italianate character seemingly eschewing Frenchness. Yet, as Ryan explained, the piece was published in Paris and French audiences greeted it with great acclaim. In any case, the ensemble’s familiarity with the Quartet, and its sensitive and intelligent interpretation, easily excused the dubious connections to the evening’s theme. Telemann’s delightful final movement found Darling’s first-rate playing shining through within a spirited collaboration.

Antoine Dauvergne’s little-known Concert in B-flat Major, Op. 3, no. 1 allowed Stumpf a well-deserved break, as Irons joined the core ensemble in his place. Dauvergne, who completed this Concert in 1751, enjoyed success both as a violinist and as an opera director. The second and third of the six movements, both arias, made his dual skills manifest. Quite plausible as operatic accompaniment, they came across with fitting pathos. The final movement, a Chaconne, revealed Dauvergne’s clever contrapuntal twists over the repeated baseline. But I especially enjoyed the energetic Allegro movements, placed fourth and fifth, which the players dispatched with flair.

A flute concerto by Jean-Marie Leclair provided the full tutti conclusion. Leclair’s work included a refined blending of French and Italian stylistic traits with which he “created his own unique musical language,” according to Ryan. Stumpf gave a virtuosic reading of the solo part, her intelligent playing never overshadowing the others. Throughout, I especially appreciated Henriksen’s work. In comparison with the harpsichord used in most commercial recordings, the subtle combination of cello and theorbo on continuo gently and transparently backgrounded Stumpf. 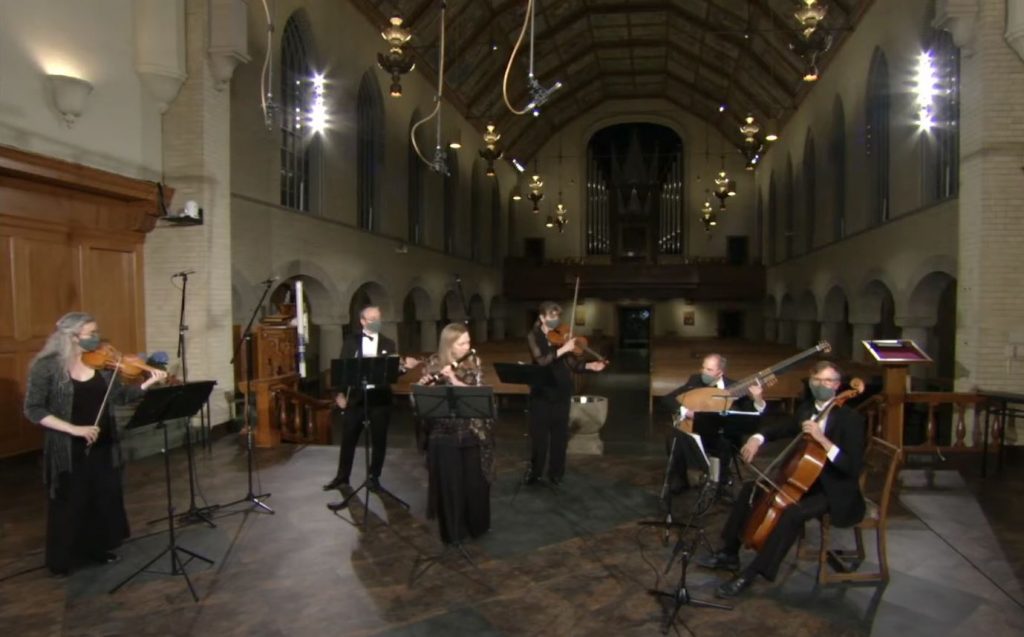 Producer Kyle Pyke and audio engineer Tom Caulfield, both from Immersive Music Project, carefully harnessed the acoustics of Trinity Lutheran to create a crystalline clarity. Videographer Jason Lachapelle’s clear and even lighting of individual players contrasted nicely with dramatic illumination of the church. The cutting between shots fittingly balanced the sense of place with closeups of individuals, without attracting attention to technology.

Instead of cutting away between pieces, Pyke allowed viewers to hear the musicians tune and see the stagehands moving chairs. That helped this audience member, at least, feel as if I were there. But Old Post Road also made good use of the unique benefits of pre-recording one aspect of an otherwise bravely live encounter with a charming pre-concert slideshow that successfully set the mood. In combination with a post-concert Zoom reception, the evening shared a welcome warmth. The concert was fitting memorization of the leadership and vision of dedicatee Dorothea “Dot” Widmayer, Old Post Road director emerita and board member, who passed away in March.

Comments Off on Early and Frenchy