Enjoying our first in-person concert in a year, we joined 60 socially distanced people on Saturday night at the Gardner Museum. Saturday night, in their first collaboration as a duo for the Foundation for Chinese Performing Arts, NEC Artist Diploma laureate, cellist Brannon Cho, and Leeds International Piano Competition gold medalist Eric Lu, brought out warhorses: Schumann’s Adagio and Allegro, Op. 70, Beethoven’s Sonata No. 3, Op. 69, and Rachmaninoff’s Sonata, Op. 19. These two artists performed their “set” with a technical mastery and perfunctory polish emblematic of the up-and-coming generation of young soloists and recitalists. Though thoughtfully chromatic in concert order (A-flat Major, A Major, G Minor), these works come with a certain liability, even for the most seasoned duo, since the cello parts are mostly written subordinate to the dazzling keyboard passagework crafted by the pianist-composers. Even more challenging, the cellist must compete with a massive Steinway Model D. Cho and Lu surmounted these difficulties with moderate ease, aligning in exemplary ensemble clarity within a somewhat narrow expressive range.

The tender yearnings of Schumann’s Adagio and Allegro made clear the quality of Cho’s lusciously vibrated tenor register alongside Lu’s sensitive voicing. In this introduction before the more ebullient Allegro, Lu provided space for the tails of phrases to breathe and linger; the more direct Cho did not fully reciprocate these gestures, and while he always executed with utmost clarity, he mostly shunned expressive rubato. In the quick-paced Allegro, the pleasantly sonorous timbres subsumed slight differences in expression, but we wished the duo had given subtleties more time to linger. The abrupt mood-change (from A-flat to B Major) in the B-section of the Allegro jolted rather than placed the listener. The manic infectiousness of Schumann’s Schneller indication in the coda remained controlled and poised, taming the expected fiery heroism at the finish.

In the Beethoven, Cho played the famous ‘thesis’ statement to third sonata with classical sobriety, an interpretive choice that characterized the duo’s whole rendition of this work. Apollonian control carried throughout the improvisatory introduction before the stark contrast of the A Minor interjection to the Allegro non tanto’s exposition. Trade-offs of scales, in evenly proportioned phrases, were well-balanced. One moment of real surprise came as Cho sounded the repeat of the exposition. With different fingering and more relaxed expression in phrasing, the technical effect aided the musical affect; it depicted an otherworldliness that is always important in guiding listeners to retrace their aural steps. The pair traversed the stormy F-sharp Minor section of the development with stoicism; fluctuations in major-minor harmonic moments let phrases pass like clouds against an unforgiving landscape. After the stormy development, the recapitulation ensued simplistically instead of indulging in a contrasting atmosphere. Cho maintained great composure (playing one phrase of the theme senza vibrato to great affect). The heft of Lu’s technique sometimes overpowered his collaborator from where I sat, well to the side of cellist and close to the tail of the piano.

The second movement, Scherzo, showcased Lu’s virtuosic command. Turns that characterize this movement were well-articulated; the bass eighth-notes in the piano were delightfully frenzied. Cho almost gave a master class in bow control, choosing moments of consecutive up-bows and vers la pointe. In the introduction to the third movement, Adagio cantabile, the artists found pallid beauty in their use of color (without portamento). Leading into the Allegro vivace, this listener experienced a controlled vitality in a movement that is all about joyousness. Lu and Cho opted to portray the composer as the genius of classicism rather than the harbinger of Dionysian romanticism. This reviewer prefers a more expressive, “imperfect,” romantic Beethoven: the composer as striver and seeker. 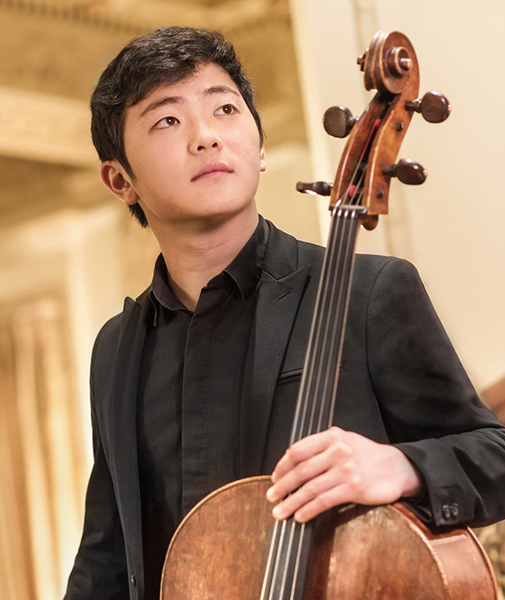 After a strangely lengthy break, during which time I found a seat where I could see and hear better, the artists returned with a muscular take on Rachmaninoff’s Cello Sonata. Cho sounded the famous half-step Lento introduction with sumptuous vibrato rather than the hazy mysteriousness that characterizes this enigmatic thematic motif. The pair’s sumptuous, full “Russian” sound unfortunately left little to the imagination. Though slightly contrived, the duo’s statement of the theme to the Allegro moderato captured the requisite wistful spirit. Lu and Cho sank into the romantic lyricism of the second theme with richness and finally some rubato; in this vignette, we relaxed with the artists. Lu had great command of the progressions in the development, always increasing the harmonic tension. The recapitulation arrived like a controlled explosion, to great effect. Cho and Lu sounded more authentically at home in this virtuosic work. The Scherzo showcased great control of bass notes from the pair. Cho’s profound bass paired perfectly to the task at hand. Both cello and piano demonstrated fantastic martellato technique.

The highlight came during the Adagio. Lu captured the eroticism and sublimity in the melody, joined and woven into great peaks of expression by Cho. There is really something to be said about the gorgeous tone of Cho’s 1668 Casini cello, his delicate treble, heldentenor middle register, and grippingly resonant bass. Lu somewhat lost his balance in a quasi-raucous opening to the Allegro mosso. That aside, the pair captured the homecoming quality to the last movement very well, even if they phrased more through dynamics than the sculpting of time. A healthy end to the sonata was followed by a fitting encore: Rachmaninoff’s Vocalise. This choice underlined Cho’s great cellistic tenor.

A good concert certainly poses interpretative questions; while the Beethoven has a more implicit classical substrate, the Schumann and Rachmaninoff portend a little manhandling. Even in the throes of high romanticism, the duo still played with an air of relative classical composure. One certainly hopes that in future collaborations, these up-and-comers will sculpt their sound more with tempo fluctuation, agogics, and rubato.

The concert will be streaming HERE presently.

Comments Off on Rendering Warhorses With Apollonian Clarity