BMInt alerted readers HERE a couple of weeks ago to the salutary fact that Tanglewood is planning to operate this summer, albeit for half its usual run. Now we’re pleased to go straight to the lede: Click HERE for the just-released calendar in easy-to-read form.

As the BSO and I return to our beloved Tanglewood and concerts for live audiences, we will pay tribute to Beethoven and spotlight 18 important composers of our time, representing a beautiful spectrum of styles and diverse backgrounds.

John Williams will lead the world premiere of his second violin concerto with the superb Anne-Sophie Mutter. Furthermore, John Williams will be honored in a Boston Pops concert led by Keith Lockhart and will share the podium with Keith for the ever-popular Film Night.

It promises to be a season to remember and cherish.

The festivities begin on July 10 with Andris Nelsons and a Beethoven program, including the “Emperor” Concerto with Emanuel Ax, and the next day, Sunday afternoon, with the Sibelius Violin Concerto (Baiba Skride), Dvořák’s Sixth Symphony, and Fate Now Conquers by Carlos Simón. The next Saturday, July 17, includes Brahms’s Piano Concerto no. 1 with Daniil Trifonov, and the Sunday program is particularly interesting: Mozart’s Concerto for two pianos, K. 365, the “Reformation” Symphony of Felix Mendelssohn (not nearly as dull a piece as ordinarily thought), and the Overture in C by his sister, Fanny Hensel — a handsome, even brilliant, orchestral rediscovery of recent years. The next Saturday concert (July 24) will be directed by old friend John Williams, and includes a premiere: his new Violin Concerto no. 2 with Anne-Sophie Mutter. Jessie Montgomery’s Starburst, Copland’s Quiet City, and Stravinsky’s Firebird Suite round out the program. Another premiere will be the opener for the Sunday afternoon concert that follows: Jeder Baum spricht by the Iranian composer Iman Habibi, to be followed by Beethoven’s Third Concerto (Yefim Bronfman) and the Schumann Fourth Symphony (his weakest work in this form, but inevitably the most popular). 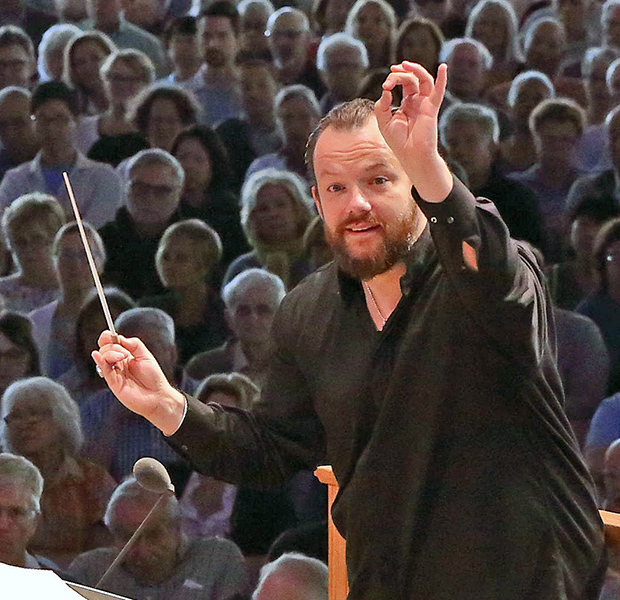 The last three BSO weekends, even if a “second string” series, promise to be at least as interesting. July 31, conducted by Thomas Adès, includes his own O Albion, two Haydn symphonies (64 and 45 — will the latter, the famous “Farewell,” be carried out in a darkened Shed?), and Stravinsky’s Concerto for piano and winds, a rarely-heard, acerbic neoclassical masterpiece that is 97 years old this year. Sunday’s program, on August 1, is directed by Alan Gilbert (he formerly of the New York Phil); it will include Saint-Saëns’s Third Violin Concerto (with Lisa Batiashvili), Schumann’s seldom-heard Braut von Messina Overture, and a Serenade (probably op. 31) by Wilhelm Stenhammar, a piece I don’t know, but I have always liked his late-Romantic music. August 7 will be another Beethoven program, the Violin Concerto (Joshua Bell) and the Seventh Symphony, directed by Herbert Blomstedt; Sunday, August 8, featuring the conducting debut of Karina Canellakis, includes a Sinfonia (for Orbiting Spheres) by Missy Mazzoli, and Tchaikovsky’s Fourth Symphony and Rococo Variations (with Yo-yo Ma). The orchestral summer wraps up on August 14 and 15; Saturday’s program, directed by Anna Rakitina, includes Elena Langer’s Suite from Figaro Gets a Divorce, Ravel’s G major Concerto (Jean-Yves Thibaudet), and Elgar’s “Enigma” Variations, and on Sunday, Herbert Blomstedt returns with a Brahms program, the Violin Concerto (Leonidas Kavakos) and the Fourth Symphony.

There are also the usual Tanglewood specialties: FCM (Festival of Contemporary Music, what used to be called “Fromm Week”), restricted this year to July 25-26; the “Tanglewood Family Concert” featuring early American songs, on July 17; and six Friday evening programs, including jazz, chamber music, and the Boston Pops; the last of these, on Friday, August 13, will be a lucky day, with “John Williams’ Film Night,” Keith Lockhart and the composer jointly directing.

Tickets to the 2021 Tanglewood season, starting at $15, go on sale to the general public on Monday, May 17, at 10 a.m. Management designed options for mobile delivery as part of an overall plan to reduce physical touchpoints on campus and reduce lines at Will Call. The Tanglewood box office will open for the summer on Friday, July 2nd at noon.

The Tanglewood grounds will open to visitors free of charge beginning Monday, June 14. The campus will be open seven days per week, 9 a.m. to 4 p.m., except on performance days, when hours will vary. A schedule of times when the grounds are available to walk, picnic on, and enjoy is available at www.tanglewood.org.