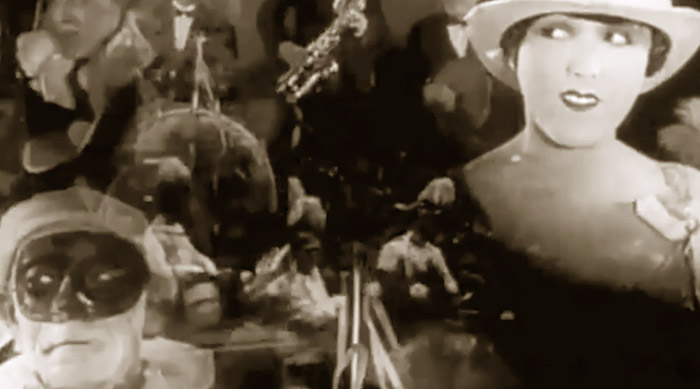 Having carped earlier in the year about virtual programs that fail to take any risks at a time and in a medium seeming to encourage such experiments, it pleases me to note that the Boston Symphony’s most recent virtual concert on BSO Now can escape that complaint: its amalgam of Weill, Hindemith and Florence Price would never have been seen on the stage of Symphony Hall in a business-as-usual season.

Weill’s Kleine Dreigroschenmusic or Suite from Threepenny Opera isn’t especially risky fare. Its appearance on a BSO concert — not Pops or Tanglewood — must be accountred a rarity, however, having been performed only twice before, in 1968 and 1995. Perhaps it was chosen because of its reduced forces, though even with the spacing inherent in the reduction, the percussion and harps are banished to the first balcony. Giancarlo Guerrero led a curiously reticent, lush but often languid shell of sound. He has chosen tempi for the faster sections that feel just a bit too slow, and the players treat the musical text with so much respect that the tunes lose their edge. The sharp and precise dotted-rhythms in the “Instead-of Song” made me think of the pins that hold mounted butterflies in place. To be sure that “lush shell” is often gorgeous, and in “Polly’s Song,” a melancholy tune with bitter lyrics that Weill arranged without the bitterness, it fit perfectly. The video, however, is almost Brechtianly alienating; the socially-distanced players sit impassively blank-faced. I can imagine it is difficult to feel in the right spirit for this work in a vacant Symphony Hall. 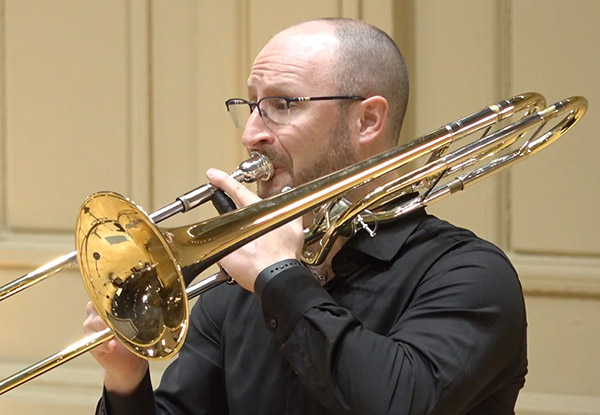 Does your heart falter when you see Hindemith’s name on a program? Mine does, and it feels like a moral failing — my failing, to be clear.  His best music has such obvious virtues, and yet I always stand at arm’s-length from it. The Concert Music for Strings and Brass, op. 50 which opened the show embodies this conundrum for me. It is both craftily assembled and solidly built. It is never obscure or excessively difficult, but if your mind wanders you know you’ve missed something in the argument. The two timbral planes of the instruments are largely kept distinct,  and the mechanism of the music is always audible. For example, at the opening the brass intone a chorale while the strings play a slightly hysterical melody: neither line is subservient to the other, but they neither clash nor blend. They stand together but independent and the ear can choose to focus on one, the other, or the interaction of the two. The slow sections have long lines that turn in and out, never grating but always demanding your attention. The piece is extroverted, with a serious intensity that never quite abates. Larger forces that the Weill are deployed, spread out over an extended stage, yet ensemble is nearly perfect. This is music I cannot help admiring and yet I get no closer to it than admiration. Perhaps a somewhat more exuberant reading might help. There were signs of something deeper in the playing of the principal trombone Toby Oft in his soliloquy in the second part, which stood out for its greater characterization (incidentally, he also brought some needed intensity to “Mack the Knife.”). Nevertheless, I am grateful for the chance to hear this work performed by the organization that originally commissioned it: it is one of Koussevitsky’s many commissions and was premiered at Symphony Hall in 1931, during the hey-day of new music at the BSO.

Four of the Five Folksongs in Counterpoint for string quartet by Florence Price (1887-1953 concluded this installment. In 1933 Price’s Symphony in E Minor was the first by an African American woman to be performed by an American orchestra (the Chicago Symphony). Over her career she wrote over 300 works. Five Folksongs is part of a cache of works found in a house in Chicago in 2009; the BSO notes date it to “c. 1920.” The brief example — just over 10 minutes — shows flashes of ingenuity. Each movement takes a similar approach:  a statement of a familiar tune, dressed in late Romantic “classical” harmonic garb, always finds something a little surprising; there follow a few episodes of variation, often in a quite different mood than the opening. Finally comes a finish which usually leans on a typical classical closing cliche. Slight but piquant, I found the arrangement of “Drink to Me Only With Thine Eyes” the most engaging, a combination of love song and lullaby that plays around with some pizzicato before coming to rest. “Clementine” has the largest tour of techniques, but the tune itself felt superimposed on the techniques that manipulated it. The big finish left me smiling, and I don’t think that’s the composer’s intent. “Shortnin’ Bread” couldn’t help sounding like Dvořák and was so brief I almost missed it. Like “Clementine,” but with rather more gravity, “Swing Low Sweet Chariot” was so dominant that Price’s developments felt a little beside the point.  The quartet (Bonnie Bewick, Lisa Ji Eun Kim, violins; Daniel Getz, viola; Mickey Katz, cello) gave a straightforward and clear reading. No justification was given for omitting the first movement, on the hymn-tune “Calvary.”

A note on the production: The BSO is presenting this as the first episode in a series named “A Fragile Peace: Between the Wars.” The title constitutes a pretty thin thematic glue. Though all the works were written between the World Wars, only the Weill feels in any way connected to them, and since Weimar excess always raises interest, the virtual event includes the presentation of a brief pseudo-documentary “feature” entitled Come to the Cabaret: Wild Berlin Between the Wars. It sketches a bare historical outline of the period by stitching together stock footage ranging from piles of dead soldiers in trenches to sped-up parties with cocktails and jazz and, just in case you didn’t get it, snippets of Joel Grey singing “Wilkommen, Bienvenue, Welcome” from Cabaret. It was well produced, barely informative, and apart from the bare facts about Dreigroschenoper, inessential.

Note: Images are screen grabs from the BSO video.

Comments Off on BSO Business Unusual