Introductory remarks by the articulate Fishman include a few salacious tidbits. The colorful life of Alessandro Stradella (1643-1682) , for instance, ended suddenly at age 38, when a nobleman had him assassinated for an affair five years after a nearly successful attempt. Fishman also highlighted some compositional firsts in the repertoire selected, such as stile moderno and evocative desire.

The comments concluded, the music begins with Sonata Seconda a Soprano Solo by the Venetian composer Dario Castello (1602-1631), in which the soprano voice may be variously undertaken by violin or flute; it includes assorted tempi in 8 sections, as well as refreshing phrasing and frequent major to minor mode transitions. Ogata, the assistant concertmaster of Handel and Hayden Society performs in quintessentially pure Baroque style on a 1772 instrument crafted by Joseph Klotz in Mittenwald. Fishman’s 1704 cello by David Tecchler of Rome, with its authentic warm tone provides continuo balance. One can also hear this sonata as a trio, or with just violin and harpsichord. In experimenting with early sonata forms, and sensuality, Castello foreshadowed musical style to come. 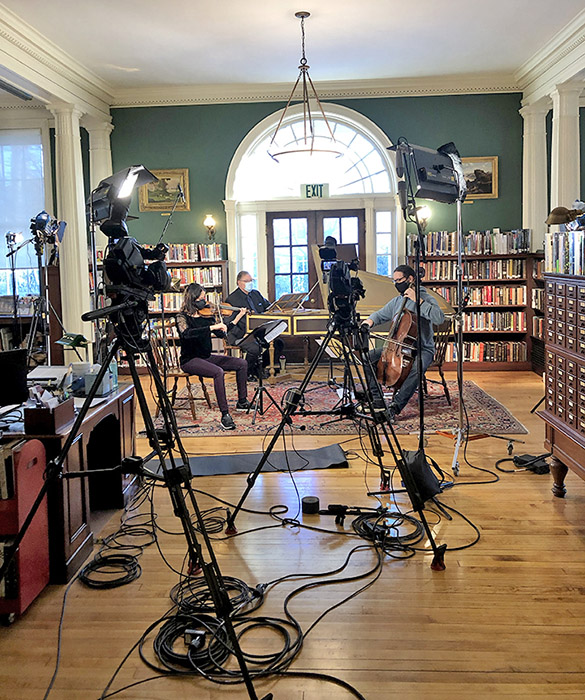 A harbinger of spring came to us in the Sonata for Violin in A Minor, the “Cucu,” by the Austrian Johann Heinrich Schmelzer (von Ehrenruef) (1620-1680). It focuses on the violin with its bright birdsong throughout the first movement, and onward, accompanied by quiet, supportive continuo in both the cello and harpsichord. The sunny and seemingly simple sonata challenges the violin, and here Ogata shines.

Bolognese composer Domenico Gabrielli (1659-1690), himself a virtuoso cellist, was one of the first, if not the first in the Baroque era to focus on the instrument—well before Vivaldi and others, earning himself the nickname, Minghino dal viulunzeel (Domenic of the Cello). Fishman’s ease and evident pleasure in the A Major cello sonata on his sonorous Tecchler instrument proves infectious. In the short and chromatic richercar, the interplay with Watson sonorously enchants.

An accomplished violinist, Giovanni Antonio Pandolfi (1624-1687), was born in Tuscany in 1624, worked for some time in Austria and ultimately died in Madrid in 1687. His 1660 Sonata for Violin and Continuo, Opus 3, number 2, “La Cesta” or “the basket,” was well-received in his lifetime. He also achieved notoriety for murdering a castrato named Giovanni Marquett. In this sonata he divides the continuo between the harpsichord and the cello. The violin part creates a pure soprano, albeit a bit shrill and challenging to play and hear. Much of the first movement is a series of cadenzas in stylus fantasticus.

It is a pleasure to hear Watson execute Jan Pieterszoon Sweelinck’s Six Variations for Solo Cello on “Mein junges Leben hat ein End.”  Sweelinck, the earliest of the featured composers (1562-1621) produced a free-flowing non-religious work here, as variations (often on hymns) were accepted in his day. Knowing that these variations, in other times have been also scored for a large group of woodwind and brass plus percussion, harps and celeste, one can appreciate Watson’s nuance and imagination through evoking those missing voices.

All told, the Athenæum setting, the gorgeous instruments, and the collaboration of three accomplished colleagues who clearly relish their musical togetherness, add up to a true delight. Sit in your most comfortable chair, holding the libation of your choice and enjoy!

Comments Off on Playing Together— Friendship Enhanced