It was quite an experience hearing Shostakovich march on Faneuil Hall’s fourth floor. So too was hearing Rachmaninoff’s timeless Vocalise truly beautifully—magnificently—intoned bringing tears. Unassuming, laser-focused, this engaging BRAI online endeavor comes highly recommended. The program [available HERE] runs February 28th at 6:00 through March 7th. A visit to its colorful website www.ballets-russes.com indicates BRAI’s growth over past years in bringing the arts to Boston.

Ballets Russes Arts Initiative continues recording its virtual concert series, In Honorable Company, in collaboration with the Ancient and Honorable Artillery Company of Massachusetts (at Faneuil Hall). Executive Director Anna Winestein promises the acoustics on the fourth floor of Faneuil Hall to be quite good. I would agree. In this uncommon venue, BSO cellist Mickey Katz with pianist Hua (Jane) Ye performed in BRAI’s “Forbidden Fruit.” Shostakovich’s D Minor Cello Sonata, having been composed shortly after an affair, being one of the backstories for this concert’s theme.

BSO cellist since 2004, Mickey Katz specializes in contemporary music, concertizing in both solo and chamber roles. Chinese-born pianist Hua moved to the US to pursue her dream of performing classical music, which she does along with teaching at various schools in Boston.

Winestein introduced Executive Secretary Joe Regan who, in turn, introduced the Company. It was quite something to see the military photographs, artillery, and other emblematic items—all this while listening. Between pieces, cameras wide-angled on the hall itself. The videography  has its own special take, literally; pianist Jane Hua gets the credit for video editing. She and Winestein set up the cameras. Bruce Hecht authored the dramatic 360 degree shots.

In the opening movement of the Franck Sonata in A major for Violin and Piano, here played on the cello, a few, well-chosen camera angles would hold visual attention, even creating a warm presence in this venue, new to most viewers. With welcome refinement both Katz and Hua returned us to another time, which somehow synced with 19th-century hall and lone concert-goer, a masked Winestein.

In his traversal of selections from Mieczyslaw Weinberg’s 24 Preludes for Solo Cello, op. 100, Katz spoke in the toccata-like No. 1 with powerful declarative statements and flourishes. In No. 3, pizzicato alternating with light staccato-like thrusts of the bow sounding much like plucking, came off tuneful, a folksy, humorous dialogue. Continuing his neatly planned set with No.16, Katz offered dramatic cries, a fierce dance, a totally gripping backstory, urgent shrieks high on his cello. The slow No. 24, plaintive with near-ghostlike trills, closed this Katz-Weinberg set that never let go of the listener. 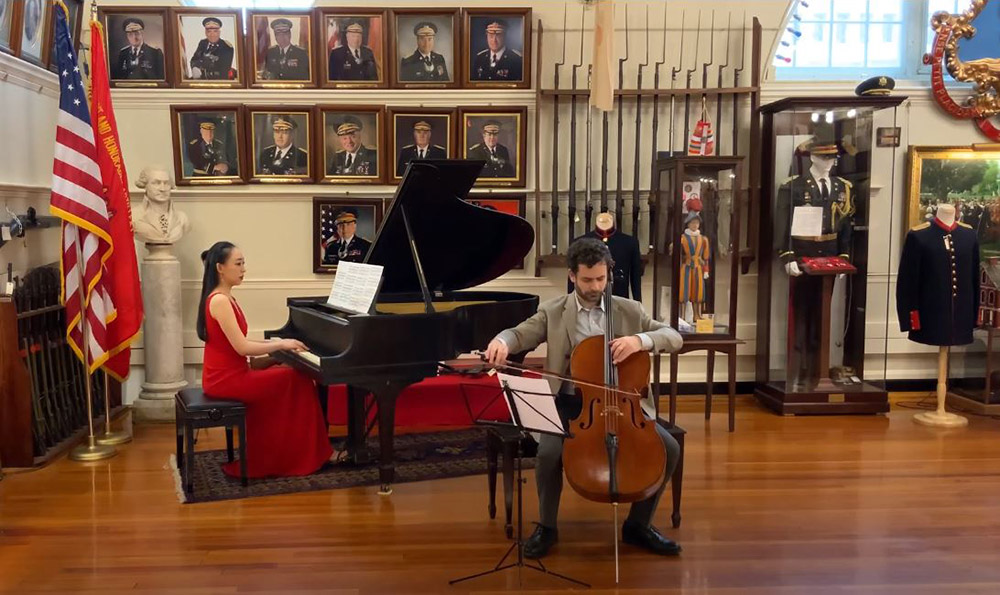 Shostakovich’s Sonata for Cello and piano in D Minor, Op. 40, from 1934, as with other works of the Russian composer, often comes with communistic baggage. But here on the fourth floor of Faneuil Hall, even the pianist’s page turns, as well as the piano itself, gave feel of reality to this virtual concert. Tenderness à la fran​çaise surfaced with Katz-Hua. But it was the militarist marching throughout a great deal of the sonata that stood out in this context. Ye’s stinging dissonances pealed out in the Largo against Katz’s own longing in the Ancient and Honorable Artillery Company room verified a most special moment. Even the concluding dancy Allegro stoutly marched, at times maniacally, with a brilliant Katz-Hua.