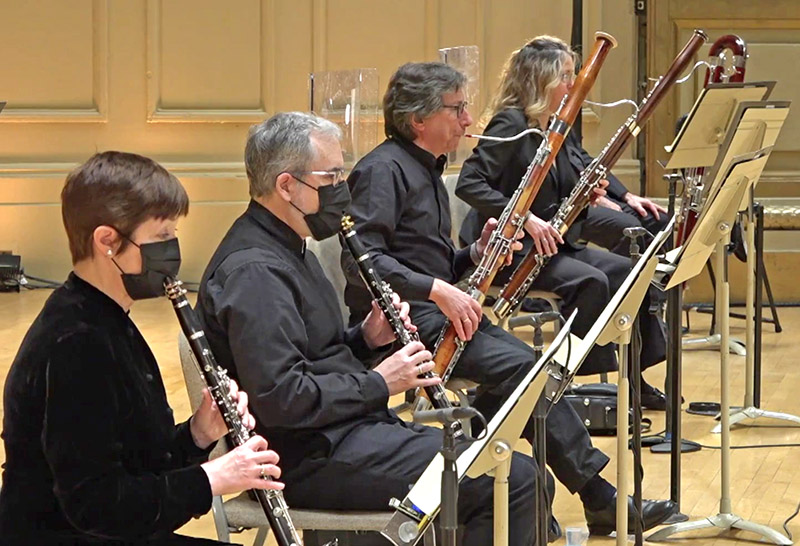 In an ongoing stream of contrasts, Andris Nelsons leads the BSO in superb renderings of the master’s fifth and seventh symphonies to conclude the online Beethoven series Music in Changing Times. Arrayed on the extended Symphony Hall stage, the sparse orchestra performs with nimbleness and clarity, with solo instrument appearances coming to the fore and full tutti dynamics shocking in their intensity. Contrasts of fate are central to Carlos Simon’s Fate Now Conquers, and with harmonic contrasts restricted by 12-tone composition, contrasts in tempo, pitch and presence/absence of sound are prominent in Schoenberg’s Phantasy, Op. 47.

Does the notion of “tense” apply to online performances that exist never and always, nowhere and everywhere? We choose the present tense as befitting a concert that can always be viewed “now”. Nelsons takes the first three movements of the Fifth Symphony at moderate tempi, each a bit slower than current standard, yielding a dramatic dignity that harkens back to an earlier performance tradition. With roughly half of the orchestra missing, the interplay among the orchestral sections is clear, and changes in dynamics are more evident. Most striking in Nelsons’s interpretation is the strong contrast between soft and loud passages, reminiscent of descriptions of Beethoven’s conducting style: crescendos become enormous waves, sudden forte entries astonish. Particularly notable in the first movement is the end of the development, mysterious and portentous leading to the fate theme’s return. The momentum is powerful into the coda, tearing at our emotions defiantly and most effectively.

The Andante, again non troppo, begins softly, building gloriously in the second theme and poignantly in the ensuing variation, wistful and then grand, Nelsons carefully controlling the dynamics and tempo throughout. Some surprises in the Scherzo: the main theme, announced in the horns, is simultaneously mysterious and thunderous, the return of the scherzo at the end of the movement ghostly and almost dance-like, leading to the transition with extremely soft strings and prominent timpani. The sudden a tempo of the Allegro brings extraordinary excitement to the glory. Phrases end deliberately a bit slurred as if overcome with unbounded exuberance, a repeat of the exposition adding to the sense of exaltation. The false ending of the development with return of the scherzo is wonderfully beautiful, the recapitulation exploding as if uncontainable. The coda accelerates into a dramatic and almost prestissimo conclusion, the multiple tonic chords continuing the forward motion to the very end.

Carlos Simon writes of his work Fate Now Conquers, “This piece was inspired by a journal entry from Beethoven’s notebook written in 1815: “Iliad. The Twenty-Second Book. But Fate now conquers; I am hers.” He then explains that he drew on “the beautifully fluid harmonic structure” of the Allegretto movement of Beethoven’s 7th symphony to compose “musical gestures that are representative of the unpredictable ways of fate.”  The result is a powerful, thrilling piece, with a cosmic architecture all its own, made up of colliding opposites, at once massive and airy, rebellious and resigned. Dark sheets of metallic weight vie with great bursts of brightness in piccolo and flute. Simon brings forth a novel aesthetic of his own, at the dynamic intersection of form and texture, eluding both by opposing them explosively in what he himself describes as “jolting stabs” and “frenzied arpeggios” – yet the whole is unmistakably grounded in the human consciousness that struggles with Fate, as attested by a marvelously emotional dirge in the cello. (About Beethoven’s diary or Tagebuch that inspired Simon, Lewis Lockwood writes: “It was published beautifully with full English translation and commentary by the late Maynard Solomon in “Beethoven Studies 3” (Cambridge U. Press, 1982), and also in Solomon’s “Beethoven’s Essays” (Harvard U. Press, 1988). This is No. 49 of a total of 171 entries, personal and reflective, including excerpts from a variety of authors, including classics and Eastern religious writers. The item is from the Iliad 22, 303-5.)

Each Beethoven symphony is uniquely itself, each one recognizably different from all of the others, as evidenced in this concert by the contrast between the Fifth and the Seventh. With a large segment of the other half of the BSO now on stage, Nelsons draws the slow introduction as grand, very dramatic, with significant pauses, the exposition coming soft and sweet, building to a raucous tutti played at moderate tempo. The fragmentation in the development comes out especially clearly with the reduced forces, and the dance character of the recapitulation emphasized; again, the contrasts between soft and loud passages are especially prominent. The coda is surprisingly wistful, leading to an outburst of enthusiasm at the end.  The emotional power of the funerary Allegretto is overwhelming, as if a lament to the deserted hall. The later sorrowful calm descends into a soft and delicate fugato, climbing to an emotionally tearing peak, the final variation soft and pain-filled. In another sharp contrast the scherzo, taken presto, is energetic, pulsing, lively and airy, the A section repeated. In the trio the BSO horns are notably beautiful, the a’ end phrase grand and noble. The reentry of the scherzo comes as a waking from a dream, the winds especially delightful. The trio’s return is slow and tinged with nostalgia, the final scherzo appearance forceful and driven. As is customary, only a brief pause leads into the final movement, sharp and thumping, phrases clipped in excitement. The rhythmic ambiguity ending the development is especially effective, the recapitulation now march-like and a bit delicate, creating a strong contrast to the coda with its sharply struck chords, rushing strings, ending with joyful, riotous horns. All in all, a reminder of how innovative and bold this symphony is.

Schoenberg labelled his final instrumental work Phantasy for Violin with piano accompaniment, thereby emphasizing the virtuoso violin as the main feature. The short dodecaphonic work is often analyzed into four sections: a laying out of the basic ideas of the work, a Lento section viewable as a slow movement, a scherzando (with an ABA structure) and a coda; transitional segments connect all. As David Lewin noted, attempts to analyze Schoenberg’s compositions inevitably leave a feeling of “unfulfillment” due to “the manifest inadequacy of our theoretical equipment to cope with its richness and complexity”. Violinist Haldan Martinson succeeds in conveying the piece’s complexity, not only because of his deep engagement, but also because he sharply exploits the chief contrast that remained available to Schoenberg, namely that between sound itself and silence, indicating unpredictability that forces a rupture in the texture of our fate, a surging of unbearable void. With Max Levinson skillfully laconic on the piano, anxiety builds, forcing an attempt at scherzando in self-protection, but who are we kidding? Ourselves? The coda comes off marvelously as a series of unstoppable aftershocks – cut short: and then there is nothing.

What a concert! Like an irresistible storm made up of crosswinds and surprises, it lifts us out of our sullen traps, unmoors us from time and place, and forces us to wing our way with fear and trembling into what is vast.

Comments Off on BSO Spirits Us Through Beethoven +