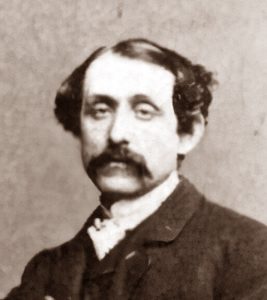 When you have observed [slavery’s] horrors as I have, when you have seen thousands of victims die through unimaginable tortures, then you would condemn without forgiveness the greatest of the inequities which the ages of barbarity bequeathed to us.    LMG

It was probably not only the upcoming Black History Month which caused known NOLA native and BMInt publisher Lee Eiseman to advocate for someone, or two, or more, to serve up a gumbo bowl of Louis Moreau Gottschalk three weeks ago in the superb Harvard Musical Association YouTube live series. It might also have been the sore need, right after the Inauguration of this new political era and year, for some musical freshness of openhearted sincerity.

The pianist and composer Gottschalk, with one parent French Creole and and the other German Jewish by way of London, was this young country’s first international musical sensation and celebrity: a son of its most cultured city, a youth prodigy in Europe publicly singled out for praise by Chopin no less and presently taught by a teacher of Saint-Saëns, raved over by famous critics like Berlioz (“Mr. Gottschalk is one of the very small number of those who possess all the different elements of the sovereign power of the pianist, all the attributes which environ him with an irresistible prestige … his playing strikes from the first, dazzles, astonishes …”), and himself a writer of articles in the American and French press — but today overlooked in the recital world.

Such racial-historical-star focuses to the side, Gottschalk is an obvious choice of advocacy by such a one as this site’s indefatigable caretaker and HMA programmer, who will go off on New Orleans at the drop of a glass bead or a tubetop.

The January 22 upstairs HMA concert initially was to entail four pianists, but covid cautions reduced those forces by half, to the estimable and altogether game duo of Xiaopei Xu and Chi-Wei Lo. In their late 20s with already accomplished keyboard and academic careers, neither had played one note of Gottschalk, or even read about him. But that appears never to stop today’s curious piano stars. So for this event they took their ready technical chops, creative imagination, good sportsmanship, and on-sleeve emotion to the next level. See and hear for yourself in the embedded video. (I am finding that the rich evening gets even better with repeated listening.)

Despite writing hundreds of (mostly) piano pieces in a career of only two decades (born 1829, Gottschalk died at 40 of a quinine overdose probably; his dates overlie Stephen Foster’s), this luminary’s “compositional skills were limited if not rudimentary,” as historian Ted Libbey politely explains, while pianist Charles Rosen sniffed that the music simply is not notably interesting. It inarguably has originality and brilliance, however, novelty of drive and flash effects (including percussion). Its syncopations presage rags if not frank jazz, and on occasion the effects can jerk tears or at least choked-up throbs from some of us.

As remarkable as anything, this vagabond of the South was on the side of right and good, ferociously anti-enslavement and forswearing his native land to embrace — including much touring — the Union and its causes.

Four-hand piano often can sound clattery, and here one of the instruments was markedly hard, almost harsh (the other is rounder of tone), abetted by Lo’s clangier touch. Xu favors more beautifully rounded expression. Lo has fully mature lounge improv skills, it must be said. Each artist idiomatically adapts to musical styles. Immature Chopin was made to point toward better Chopin, coming soon. Less-crafty Rossini (which also is what Gottschalk sounds like a lot of the time) signaled truly crafty Rossini on its way. Lilt, sway, and beat were close to right at every opportunity. And for every rackety moment there were three of real beauty and shape.

Both musicians also spoke, simply and articulately, into the largely empty space, giving historical notes and dramatic re-creations, except in plain newsy style — whether the dissing of the tyrant Gessler by (Schiller’s) Tell or the late Beatle’s idealism, which Xu recited as if lines from Auden, or a friend’s email: Imagine there’s no heaven … above us only sky.

China-born Xiaopei Xu has won numerous piano competitions there and here, has her bachelor and master’s degrees from NEC and Yale, performs widely, and is in the doctoral program in piano peformance (also TA) at BU. Taiwanese Chi-Wei Lo is likewise an extensive prizewinner and active piano performer; the Juilliard graduate, currently pursuing a doctorate in the NEC Contemporary Improvisation program, has as well written for these pages. It is unsurprising that they’re as eloquent in print as at the ivories. More interesting than performance description, then, is the story of the program genesis and choices, and their execution. Your intrepid reporter was eager to hear by email from the performers (lightly edited and woven).

DRM: How did this unusual presentation come about?

Xu: When Lee approached us with this idea, we thought it would make a very interesting and fun concert. Neither of us had played any Gottschalk before, so we knew it would be a refreshing experience. When it was reduced to the two of us roughly two weeks before the concert, we changed the program entirely to piano duo music. All pieces were selected then, including the Chopin and Weber. We wanted to add a few of Gottschalk’s contemporaries and some variety to the 19th-century language.

Will there be a CD?

We weren’t thinking about that while preparing, but as we watch the video, we think that it may be a good idea.

You could include Gottschalk American contemporary Foster in the future.

We know Stephen Foster only for his songs; we have never performed anything by him. Perhaps someday it would make a good theme for one of the Contemporary Improvisation concerts.

Yes, the left piano is much brighter than the right. It is especially crisp in the top register, which perhaps worked well with some of the four-hand pieces. However, considering the color differences, whoever was on the right piano tried to produce more sound to balance the harsher tone of the left. While the right one naturally produces a round tone, the left piano had to be played with extra attention. Whether successful or not, we believe that pianists should [be able to] create any sound they wish on any piano.

Are you musically experienced together? The last year has been disruptive.

We have known each other for quite some years but have played together only in a few small concerts. We enjoyed our Gottschalk work so much that we plan to play together much more, and we are browsing through repertoire and thinking about our next project. Individually, our recent concerts got mostly postponed or canceled due to COVID-19. Xiaopei’s next concert is scheduled on April 24th at German Society of Pennsylvania in Philly and on May 14th at Gardner Museum, presented by Cathy Chan. Chi Wei’s tour in Taiwan was postponed from last summer to this summer.

This is not pure Gottschalk, it says. Probably for the better!

About our arrangements: Gottschalk’s works tend to be very repetitive, so we tried to make every repetition different. We embellished through harmony, rhythm, counterpoint and dynamics, something he probably would have also done when he performed. Most of our additions were not strictly planned, however. We tried different things in rehearsals and surprised each other at the concert.

Besides “Dying Poet,” which was improvised, we arranged “Union” the most. Since the piece was written for solo piano, we added a complete second piano part with flashy embellishments, countermelodies, and harmonies not belonging to Gottschalk’s era. In the “Yankee Doodle” theme, we tried to bring in Ives’s Americana sound. We wanted to include contemporary elements while paying homage to Gottschalk’s patriotism. We also added the [Guthrie] tune “This Land Is Your Land” as a countermelody for “Hail, Columbia.”

And you added more than musical embellishment.

Lo: Right before “The Union” Xiao Pei recited the lyrics to “Imagine” because we wanted to conclude the concert in a statement of unification and peace. We believe that it is meaningful for musicians to use their platform to inspire positive thoughts and messages. We were also aware of the tension everyone was feeling politically at the time of our concert — two days after the Inauguration. We are aware that Union was the name for the North during the Civil War, and perhaps doesn’t address specifically the synthesis of the two sides, but with the symbolical tunes, and the Anthem, we had hoped to give it another layer of meaning, one that’s immediate to us today.

Was there another Beatle present?

“While My Guitar Gently Weeps” is coincidence; the similarity appears in one passage of “The Union,” toward the beginning of our arrangement. The Beatles open the verse with a descending A-G-F#-F in the guitars, and this motif comes back throughout the song. We had a few measures of descending chromatic line in the second piano. I don’t think this descending motif is unusual, as it happens in many genres and repertoires, especially in the form of a lament bass.

Contemporary improvisation in piano is not easy to convey in a few words, as it includes everything that is not “mainstream,” but I can try to share my take on it and discuss it as succinctly as I can. In NEC’s description of the Contemporary Improvisation department, it says, “Contemporary Improvisation program addresses the needs of musicians seeking to move beyond traditional boundaries. We bring together a diverse group of the world’s finest young artists in a setting where they can grow as a community of composers, performers, and improvisers. With an emphasis on ear training, technique, conceptual ideas, interdisciplinary collaboration, and a wide range of improvisational traditions, the CI program is uniquely positioned to produce the complete 21st-century musician.” There are a couple focal points in this statement.

First, the notion of diversity. I would say that the diversity here goes beyond cultures and traditions. It also includes different instruments and different forms of arts. As long as it suits the purpose of the performer, using the piano to arrange and perform repertoire not intended for piano is an important aspect of CI in piano. Thinking about it this way, our repertoire can literally come from any style and period. To achieve this, we have to sometimes break traditional boundaries to achieve our goal. For example, in “The Dying Poet” playing harmonies Gottschalk would have never used or to “The Union” adding Ivesian sounds.

The second important aspect is collaboration. We play with musicians from different cultures and backgrounds, hoping to clash and produce innovative sparks. We are also intensely into interdisciplinary collaboration. We believe that the concert experience can be elevated through demonstrations of poetry, images, or movement. We incorporated a little bit of that into this  Gottschalk concert.

The third focal point is “improvisational traditions.” We are taught these traditions, and are encouraged to use these methodologies in our own musicmaking. Cecil Taylor’s Unit Structures, Ornette Coleman’s Harmolodics, Anthony Braxton’s Tri-Axium Theory, Messiaen’s birds and celestial harmonics, Debussy’s pedal tone and pentatonicism, James Brown’s funky rhythm, rhythms and melodies from the Middle East, Gospel traditions, and Jewish musical traditions contribute only a fraction of the methodologies introduced to us.

What feedback do you get from others? Peers?

We had some positive feedback from friends and mentors, though not in great detail. I can share with you a story within my family. My grandmother had a stroke a few months ago. She forgets who we are and cannot communicate verbally. Her attention span has been no more than 15 minutes. However, she enjoyed the music and insisted on finishing our entire stream, without losing focus.

We are thankful to HMA and are happy to have given her some peace, even if it was only for an hour.