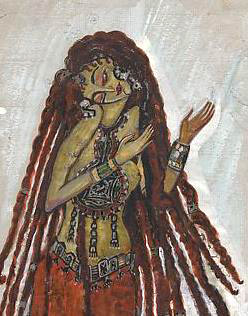 My immediate inspiration for an addendum to “The Rite of Spring: Confronting the Score” [BMInt 2008 HERE] comes from a Sony’s “Le Sacre du Printemps: 10 Reference Recordings” (87254 61742), from its 100th-Anniversary Collection (2013). Ranging over nearly 70 years, the collection begins with dubbed 78s from the Philadelphia Orchestra under Leopold Stokowski in 1929 and Stravinsky’s own platters with the New York Philharmonic in 1940. The composer’s last preserved version of The Rite came in 1960 at the beginning of the stereophonic era. The collection reaches forward to 1996.

One might well imagine that in the decades after 1913, The Rite of Spring would be considered a conductor’s challenge, especially because the orchestra is so large and the textures so variable and colorful. But only the Danse sacrale, the Sacrificial Dance, presents any real challenge to time-beating. As to indicating the measure, all of the rest of The Rite seems quite straightforward. When the curtain rises in Part I on motionless dancers (Les augures printaniers [Spring Fortunetelling], No. 13, mm. 76-247), the conductor beats in an uninterrupted 2/4 pace for 171 bars, accentuating either with sharp downbeats or with offbeat bounces, as needed. In the “Dance of the Abduction” that follows, where the basic compound-meter pulse is in dotted quarters with cross-accents abounding, the conductor’s time-beating task, and the orchestra’s task in following the beat, encounter relatively few difficulties. Back in the Diaghilev days it may not have been always so, but today’s orchestra players tend to worry more about getting the notes out when the patterns are fast, high, or strained than about counting the beats, as long as they can feel the measures with an occasional nod from the conductor.

Thus, in the Rite, the conductor must concentrate on balance above all within the huge ensemble, and in assuring prominence of orchestral details. Stravinsky’s orchestration does not always make that an easy task, nor is all of it fully satisfactory, as his own repeated attempts at revision make plain. (“I would go on revising my music forever,” he wrote in 1960, “were I not too busy composing more of it, and I am still not content with everything in Le sacre.”) The audible differences among these recordings, over years of advancing technology, reveal what different conductors and control-room editors have thought about these problems. Inevitably some details emerge more prominently than others, and inevitably others disappear into inaudibility.

First of all, I listened for accuracy in representing the published score, and then for distinctive features. (This article references the Kalmus folio score, pirated from the revised full score of Edition Russe de Musique, originally published in 1921 and full of errors lovingly corrected; and the octavo study score, completely re-engraved and published in 1967 by Boosey & Hawkes.)

I particularly focused on the concluding Danse sacrale, Sacrificial Dance; its rapid changes of meter (often every bar, for long stretches) are famously very difficult to conduct. (Mean tattle has it that Serge Koussevitzky re-notated much of the Danse sacrale so that he could beat time in 4/4, but the fact is that Nicolas Slonimsky re-barred several pages for him in 3/8.) I’ve never conducted Le sacre but I have played it with a second pianist on eight different occasions, and while reading closely from score, I wouldn’t want to have to watch a conductor; the changing meters are complex, but the 16th-note kinesis (HERE) is steady and fully audible, and the many fermatas pose difficulties in starting and stopping. But in the orchestra, everything in this dance depends on close coordination of upper-register thick chords and the single-note low bass, which is represented by cellos, basses, and tubas, and much of the time by timpani and low strings; precise percussion rhythm is absolutely critical. The early Stokowski record, which has some notable attention to details hardly noticed elsewhere, sounds very ragged in the final pages. Stravinsky’s own 1940 version is remarkably clear in Part I and the earlier parts of Part II, and these naturally offer the composer’s own imprimatur; but the Danse sacrale encounters serious difficulties even from the beginning (No. 142); it stumbles at No. 180, hesitates at No. 192, and then breaks down completely all the way to the end. The 1960 recording is somewhat better here, but not without many bumps in the final pages; one can hear splices marking multiple retakes. Pierre Monteux’s 1951 recording with our own Boston Symphony Orchestra carries the authority of the conductor who directed the 1913 premiere of the ballet and the 1914 concert premiere; but the end of the Danse sacrale, from No. 192 on, is a shambles. This is yet more evidence that the Danse sacrale remained a drastic hurdle after nearly 40 years.

Of the earlier of these ten discs, Eugene Ormandy leads Philadelphia Orchestra in the best performance overall — the most confident in terms of time-keeping, and the most faithful to the published score. The Danse sacrale moves right along without missing a beat. It’s worth noting that the timpani in both Ormandy’s and Stravinsky’s 1960 performances contradict the score identically at Nos. 144, 147, 169, and 172: the same notes are missing, and the same notes are displaced into the wrong measure. One suspects that the same set of incorrectly-copied orchestra parts were used; but the conductors, and the composer, should have caught these. Most tempi in all ten feel comfortable throughout, yet these often appear at variance with metronome markings. Stravinsky’s 1940 Action rituelle in Part II, for instance, runs considerably faster than the indicated M.M. of 52. The score calls for 168 to the quarter in the Danse de la terre at the end of Part I, a breathtaking pace that few are willing even to approximate, even though marked Prestissimo. Stravinsky’s 1960 only achieves about 152 at this point. Surprisingly, Stokowski, in the earliest set of shellac sides, gets much faster—about 164.

Five more recent examples bring the reference collection almost up to our own time, 50 years after Stravinsky’s death and 60 years after he last recorded Le sacre de printemps. A few details strike me as important. Seiji Ozawa’s solidly clear traversal with the Chicago (1968) is the only one making bassoons at No. 11 audible; the horns at No. 29 are also prominent (as in Stravinsky’s 1960 interpretation and nowhere else); the Danse sacrale generally feels too fast. In Pierre Boulez’s precise and clean performance (Cleveland Orchestra, 1969), the Danse sacrale comes across with great accuracy. (This set does not include his more recent and excellent DGG CD.)

Leonard Bernstein’s well-executed 1972 version with the London Symphony has some mannerisms: there are breath pauses at Nos. 80, 81, and 82 in Part II (remember the evolutionary clouds of mud in Fantasia); the Évocation des ancêtres is much slower than in any other in the set, as is the Action rituelle that follows, and the bassoons at No. 125 (“five old men”) are too legato. Esa-pekka Salonen gives a credible interpretation (Philharmonia Orchestra 1989), especially in the very precise Danse sacrale. He asks for an un-called-for ritard in the trombone-glissando measures after No. 53 in “Spring Rounds.” The paired trumpets after No. 84 in Part II are so quiet that I am sure they are using Whispa mutes; Ozawa uses Harmon mutes; everyone else (except MTT, below) seems to be using straight mutes.

Michael Tilson Thomas’s San Francisco Symphony (1996) take impressed me most of all. The opening bassoon solo sounds more beautiful here than in any other recording I have heard, but at No. 8, I can’t hear the solo contrabass. The Danse de la terre is very clear. The trumpet mutes in Part II seem to be Whispa, as in Salonen’s. The very fussily contrived harmonics for solo cellos and basses at No. 91 actually work! One of my favorite sounds in all of The Rite is at No. 103 (Glorification de l’élue) and several times thereafter: rubbing an arc around the rim of the tamtam with a triangle beater, which sounds wonderfully scary if you can hear it; in most hearings the tamtam is hidden too far back or not elevated, but this time it comes forth brilliantly. Thomas’s careful attention achieves accuracy throughout; it’s what one would have hoped for and expected from Thomas, who in his boyhood befriended the composer, and who later (with Ralph Grierson) made the first commercial release of the piano-duet version of The Rite of Spring.

Most of the older versions reflected conductors’ personalities and individuality, albeit without presenting the Danse sacrale accurately—and this applies to Stravinsky the conductor as well. A century’s performance history and practice, though, have shown orchestras, and conductors, how to do it correctly. For another take, the captious reader and listener should refer to a critique, found in Stravinsky and Craft, Retrospectives and Conclusions (1969), which includes “Three Types of Spring Fever (Stravinsky Reviews The Rite),” a comparison of three discs, originally written for Hi-Fi Stereo Review in 1964. The three are the Berlin Philharmonic (von Karajan, DGG); Orchestre national de la R.T.F. (Boulez, Internationale Guilde du disque), and Moscow State Symphony (P. Kpaøt, tape). (For this last-named conductor, I read the roman letters as Cyrillic, i.e., “R. Craft.”) Stravinsky makes razor-sharp comments for eight pages, often with praise, but concludes: “None of the three performances is good enough to be preserved.” But I think that Stravinsky today, even at the grand old age of 139, would approve of some of these new ones, conducted by younger Cossacks.

Note to embedded video: Gergiev adds a timpani D not in the score at m. 287 (second bar of No. 143). I can’t explain this, but he doesn’t add one at the similar “C sharp major” place (m. 402, second bar of No. 168) (which doesn’t prove anything). The dancing is very good, but once again, not precisely matched to all the details of the score (which is another issue entirely).