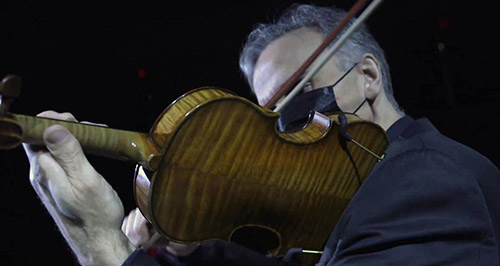 Prokofiev, Pärt, Stravinsky, and Missy Mazzoli were the focus of BSO’s caption, Music in Changing Times: New Beginnings. “Stylistic musical ‘arrivals’” is the focus of one “Feature,” and another is “BSO bassoonist Suzanne Nelsen speaks with Anna Rakitina.” She is only the second woman assistant conductor in BSO history. The caption might also suggest our taking a seat at home in lieu of one at cherished Symphony Hall.

The first video feature noted how, remarkably yet unsurprisingly, in her second year with the orchestra, Russian-born Rakitina, made her official BSO debut after several Covid cancellations. She explained that her duties require her to “follow along in rehearsals looking for details and balance,” and be ready to step in should there be an emergency. What about the musicians being so far apart? Rakitina did not think it was very different for her. She spoke about Prokofiev’s Classical Symphony, as at once “familiar and fresh.” She conducted it her very first time on the podium.

She conducted Symphony No. 1 in D, Op. 25, Classical informatively to this viewer’s eye, spinning an easy going Classical—definitely classical—with clear-cut Alberti basses, passing melodicism, and emphatic, summer band-like cadential pronouncements, fully cheerful. The slower Larghetto comforted. The Gavotta finished off with the lightest cadence and touch of all. The symphony’s giggly close confirmed a sunny and open nature from this new conductor.

The second feature narrated over visuals of Beethoven, Schoenberg, Miles, and Stravinsky, the theme being their “arrivals,” newness, that is. Firebird made the Russian a sensation and announced his arrival as a preeminent composer. Estonian Pärt’s extended search in seclusion led to defining his voice—tinnnabulum, in a word. Bell-focused to conjure Russian Orthodox spiritualism

Back to music. In superb contrast to Anna Rakitina’ s sunniness in Prokofiev, violinist Gil Shaham fired on all multiple stops in his opening solo of Fratres. Turning to bell-like pizzicatos, he drew BSO’s string players and percussion away from the “atmospheric” and instead to the “spiritual” (BSO notes). Both Shaham and Rakitina led the way to an awesomeness, reaching ever deepening, inspiring expressiveness rarely encountered in this Pärt favorite.

Low strings came into camera view, and the Suite from the Firebird (1919 version) got underway. Transparent, restrained, nearly innocent at times, on the slower side, and, curiously, classical leaning, this performance found Rakitina pondering purity. The Boston Symphony Orchestra, a true marvel, recreated Stravinsky the orchestrator. The Finale sprung into gloriousness!

Celebrated American composer Missy Mazzoli takes her title, Set That On Fire, from a phrase used by the painter Jean-Michel Basquiat. Mazzoli appears on monitor along with glimpses of her score. “Building and dismantling virtuosity” for her means not to challenge musicians to play “faster and louder than anyone else.” For her, it was exploring the challenges of “big gaps.” Her piece, in which players sit out then come back into the ensemble, requires intense concentration.

The opening of her chamber work made that obvious. In ways this is music of disguise. Contemporary layers paint over Spanish-ness, Bach, other miscellanies prowling beneath unquestionably imaginary surfaces. To one degree or another, composer and in part  performer make manifest the pleasantries, invocations, and ecstasies. Elizabeth Klein, flute; Thomas Martin, clarinet; Thomas Siders, trumpet; Valeria Vilker Kuchment, violin, with pianist Vytas Baksys,  brilliantly sought subtler ways to play the familiar and fresh facets.

From a virtual seat—my first ever for the BSO—this memorable “concert” became one that I will not soon forget.

The concert streams HERE until February 27th to BSO subscribers or all for a donation of any amount.