Grab a drink, corral your whole household (or your powers of concentration), plug in those high-fidelity speakers, and enjoy; one’s cat and five-month-old baby can become honored guests for the BSO’s latest stream. This second installment of the orchestra’s three-part New Beginnings focused in on the word “home,” a place that has become quite familiar to all of us.

Conductor Thomas Wilkins informally introduced this quasi-documentary concert, interspersed with insightful reflections and a documentary, among the four works centered on this “home theme.” It could mean returning to one’s roots, maintaining one’s identity, or finding one’s voice. Each composer, fermented in western tonality, and like the sourdough process you’ve learned to obsess about, made inclusions in the form of folk songs and tangos, the bandoneón and oud, and the emotive reactions to uprootedness, changing each work’s flavor with subtly and significance.

The three folk song settings by American-Syrian composer Kareem Roustom consciously attempted to return and embrace the rich musical heritage of Syria. The three selections from Alleppo Songs, “How Beautiful the Light of the Rising Sun,” “Antiochian Hymn”, and “Enough! I Intended to Leave You” evokes the beauty of Syria’s rich musical tradition. In the first song, the piccolo trumpet calls out from the very back of the stage with the playful melody. The orchestral texture was sweet, serene, and aptly simple, highlighting the monophonic nature of these vocal melodies. In Roustam’s adaptation of the second song, the romanticized string phrases reveal the composer’s adeptness in film scoring and orchestration. A lovely reserved English horn solo closes out the song. In the final selection, home becomes a distant memory, where one can sense an oud melody now carried by the orchestral clarinets and bassoons, the controlled portamenti of the strings replaced Syrian vocalizations, and descending woodwind flourishes provided a more modern energy to the folk song.

In an interim video segment, Héctor Del Curto introduced us to an instrument not often heard in the concert hall: the bandoneón. By explaining its historical roots and evolving button configuration—Curto summarized the instrument perfectly: “No logic”—the audience gains a deep appreciation for the instrument and the dedicated performer.

In Piazzolla’s 1979 Aconcagua, a Concerto for Bandoneón and Orchestra, the essential tango voice of the bandoneón takes centerstage in all respects, with the controlled accompaniment of the strings as a backdrop. With both hands of soloist seamlessly alternating between energetic rhythmic chords and balletic melodic sequences, Piazzolla captures all the virtuosic characteristics of the instrument. In the second movement, the soloist evoked the sentimental, with delicate song-like phrasing, a passionate tutti with the strings, and the weightless staccato of a bandoneón, harp, and piano trio. The soloist propelled the presto finale with jazzy syncopations and flourishes, while the balance and blend (audio mix?) of the accompanying orchestra felt more like Glass symphony than a seductive dance.

With Mathis der Maler, the chief operatic and orchestral contribution of Paul Hindemith, the concert turned towards gravitas, drama, and the chromatically tonal language that typifies his prolific output and those of his students. John Heiss quips that Hindemith’s text The Craft of Musical Composition should be retitled to The Craft of my Musical Composition. Written prior to his departure from Germany in 1934, the symphony adapts—or in the case of the third movement, recomposes—the music of his eponymous opera, reflecting the internal and social tumult the Renaissance painter Matthias Grünewald.

Hindemith’s symphony embraces his iconic, edgy motives and distinct usage of brass, woodwind, and string textures. The quick tossing of the fugal subject becomes comically exaggerated with socially-distanced performers, and the brass ensemble, with bombastic statements from the back of the stage, reasserted their rightful authority. The woodwind section excelled at this game of hot potato, with attentive ears and crisp control of the relentless motive.

Roustam and Piazzolla make for tame entry points into the important and vital contribution of the expansive world of music outside our traditions. Hindemith sought to embody the German musical tradition, despite his emigration from his homeland a few years after the Mathis premiere. And in the feature, “Finding Home”, Roustom reconnects with his heritage after becoming immersed in American culture as an adolescent and Piazzolla returns to Argentina from his childhood in New York and reembraces the tango at the urging of Nadia Boulanger.

The brief chamber music encore, Warmth of Other Suns by Carlos Simon, placed another accessible work before us, this time stirring up a prayer-like atmosphere. BSO members Victor Romanul (violin I), Wendy Putnam (violin II), Mary Ferrillo (viola), and Adam Esbensen (cello) surely conveyed warmth in this concise single-movement piece. The emotive content of the work is based on Isabel Wilkerson’s acclaimed book The Warmth of Other Suns: The Epic Story of America’s Great Migration. The individual calls within the string quartet, sparse moments of expression, and a well-timed camera pan on an empty symphony hall, captured the hope, apprehension and hardships endured by the six-million African Americans who relocated from the Jim-Crow era South. Consider this quote by writer Richard Wright, who experienced this transition firsthand:

I was leaving the South to fling myself into the unknown… I was taking a part of the South to transplant in alien soil, to see it if could grow differently, if it could drink of new and cool rains, bend in strange winds, respond to the warmth of other songs and, perhaps, to bloom. 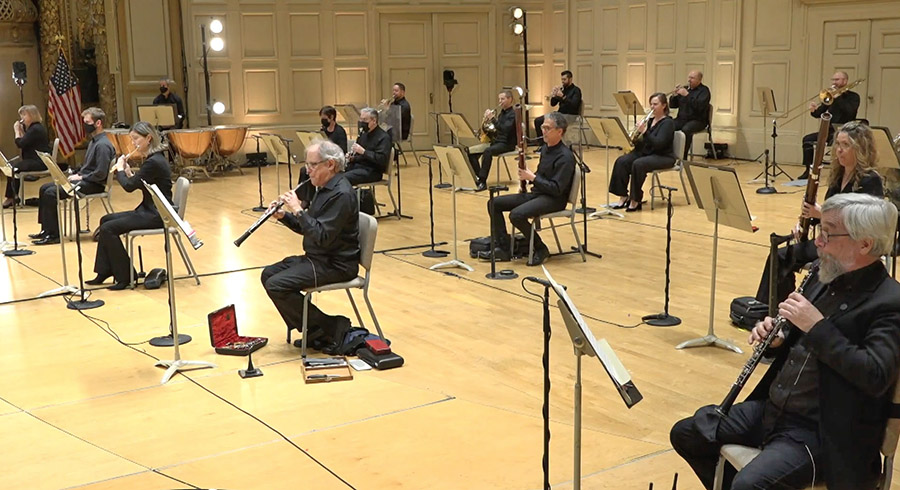 The closing credits could have benefited from silence, especially considering how the weighty topic of Warmth of Other Suns, necessitated reflection.

As the previous BSO reviewer discerned HERE, the title of New Beginnings seems mostly irrelevant in this program. The thematic thread of “home” perhaps helps us reexamine our own situations: Maybe home doesn’t have to be a symbol of containment or isolation, but a place to restore one’s relationship to their roots, or even develop one’s psychological roots. But as a jocular aside, how much do we really want to hear about “Home” after 2020?

The concert streams HERE until February 20th to BSO subscribers or all for a donation of any amount.