While you still can stream this gem [through Jan 30th HERE], do it! Cappella Clausura has devised a quietly stunning stream of the 1650 Magnificat a Otto Voce from the Salmi a Otto Voce of Donna Chiara Margarita Cozzolani, the abbess of the convent of Santa Radegonda of Milano. Cozzolani, who lived from 1602 to ~ 1678, has fortunately been rediscovered and recognized as an extraordinary composer of the Italian Baroque. Her Vespers, many motets and concerti sacri for solo, duo, trio and other combinations were widely admired (and envied) during her lifetime. Indeed, there were failed efforts to squelch the superb music and concerts of Santa Radegonda. Cozzolani’s Magnificat is considered by many as the culmination of those works, and sets the story of the Annunciation (Luke 1:46–55) to unique and inventive 16th Century harmonies. In this video of the Magnificat, each musician recorded the relevant part using the just conductor’s video along with that of the impressive theorbo player, Catherine Liddell, after which the video master (Christopher Pitts) and audio engineer (James Zaner) assembled and edited the individual contributions of the 17 singers, an effort that took several months. The result is an audiovisual confection a cut above most of the current efforts of streaming concerts in these isolated and sometimes too long pandemic days.

The Magnificat is the last portion of Cozzolani’s Vespers and features repetitive sections of text, such as “Magnificat anima mea dominum, “…which echoes at intervals throughout, with slight changes in text in paired voices, conveyed here in high quality in a beatific setting. Most of the Magnificat is in D major, and each singer is featured at intervals, creating a quietly joyful and expressive scene.

The characteristic aspects of Cozzolani are clear throughout: sly use of dissonance, compelling rhythms and repetition. The singers in the recording, all active freelancers in the Greater Boston musical performance world, clearly loved this opportunity, and the video is assembled so that the viewer/listener can appreciate each and every one of them. 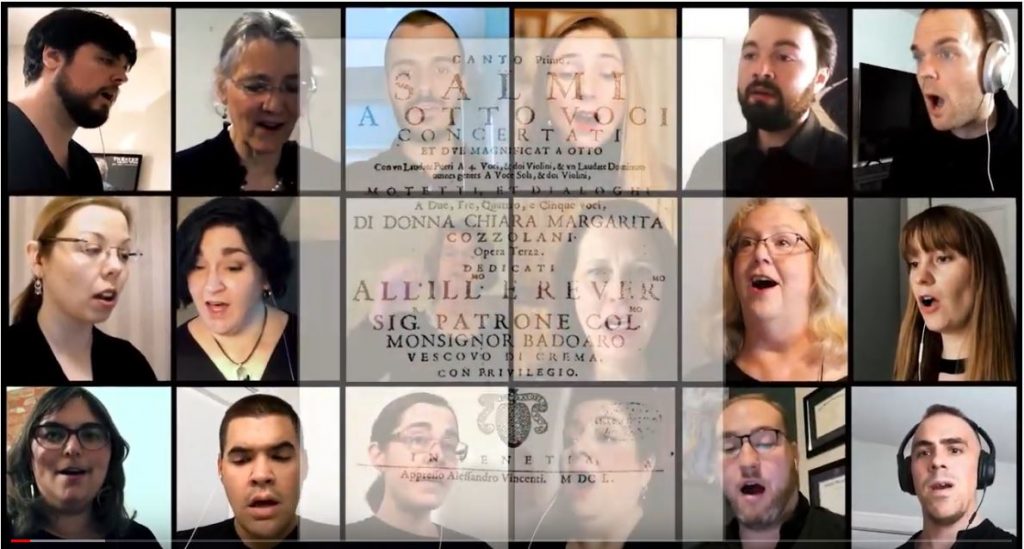 Liddell’s expressive and well-crafted theorbo continuo centered this version of the Magnificat.  The Baroque theorbo, essentially a lute with two necks, allows the lutenist to play on some 14 or even 15-19 strings, in this instance masterfully. And, per usual, Amelia LeClair’s charismatic conducting shines through.

Beyond the musicianship, focused and relevant frames enhance the images of a nun who may be Chiara Margarita, il Duomo di Milano, and a convent from the period replete with Caravaggio paintings, and a DaVinci painting of the Annunciation build an enchanting and reverential atmosphere. The entire experience, of just around 10 minutes, leaves one wishing for the rest of the Vespers.

Cappella Clausura’s founder-director LeClair, a Resident Scholar at Brandeis University’s Women’s Studies Research Center, strives “to bring engaging performances of this music to today’s audiences, and to help bring women composers into the classical canon.” Several additional streaming videos by the group can be viewed right now on Clausura’s YouTube channel; its “Concerts in Episodes” series, initiated this fall, features, for “After Hildegard von Bingen by Elizabeth Gaver,”and “On Fanny Mendelssohn Hensel,” and Additional video productions are promised this winter and spring.

Comments Off on Chiara Margarita Cozzolani’s Magnificat: Hear It!