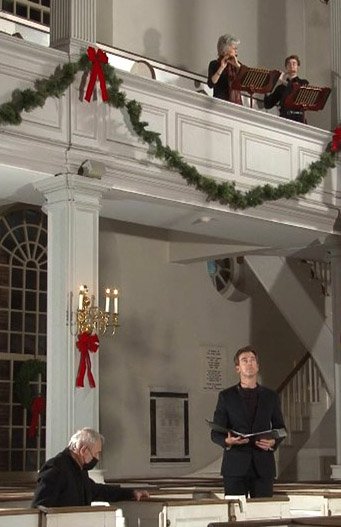 In general, if I have to witness a substitute for an in-person concert, a real-time stream is what I want. A pre-produced product might be offering something new-to-us, but because it has become a permanent and past tense thing, it alters the terms of engagement and assessment. The new thing competes with recordings and videos while it steals something from the live experience. People only rarely watch a sports event more than once because its liveness had made it compelling. I feel the same way about most of what is being produced in this difficult period. I don’t mean to berate those who are doing it — one has to do what one can —the longer this goes on, the more I despair.

Despite this, the Boston Camerata’s An American Christmas 2020 served as a balm and a comfort this week. It succeeds because it captures a unique and infrequently heard repertoire in a historical space of visual and auditory beauty. It functions both as a replacement for a concert, and as a formal record of a many-years-long performance tradition.

Camerata’s Emeritus Director Joel Cohen first assembled the American Christmas program in 1996, and they’ve been performing it ever since, with some programmatic tinkering over the years. Current Artistic Director Anne Azéma directs this concert (and still has pretty good pipes, for what it is worth), and Cohen appears to play some discreet guitar and do some readings from the Book of Luke.  For those not familiar with the repertoire you might be forgiven for thinking Dean Martin and Andy Williams when you hear “American Christmas,” but what we’ve got here is much rawer, vigorous, and intense than anything they ever did. The core of the program is four-part American shape-note hymns: raw, rough and ready arrangements of sacred texts. The composers cared little for the rules of Western voice leading, and were writing for singers whose ability to read music was rudimentary. The shapes are the note heads — round, square, triangular — that allowed amateur singers who could internalize do-re-mi intervals to read the music just from the shapes. The best hymns give all the voices good tunes to sing no matter where they are in the harmony, and the tradition allows all lines to be sung in any octave, men can sing the top line, women the bottom. When sung with the requisite energy and steady rhythm, the best tunes generate a kind of hypnotic resonance, and can be downright surprising in how they twist and turn within their diatonic space. There’s no special pleading for the work here; if you find it primitive, too bad for you. I can’t imagine a better case being made for it.

If you have the Camerata’s CD of this program, issued many years ago, this will have a ‘greatest hits’ feel. A few Shaker hymns added to the mix provide a modicum of variety. The venue is the Old North Church. The production makes a virtue of the inability to seat an audience by moving the performers around the space: the fifes are up on the second level, perhaps for acoustic reasons, but probably also to keep them and their unmasked playing away from the other performers, who mask for the most part. The sound is excellent; a bit of boominess to the acoustic in the absence of spectators doesn’t do the one-to-a-part music any harm. 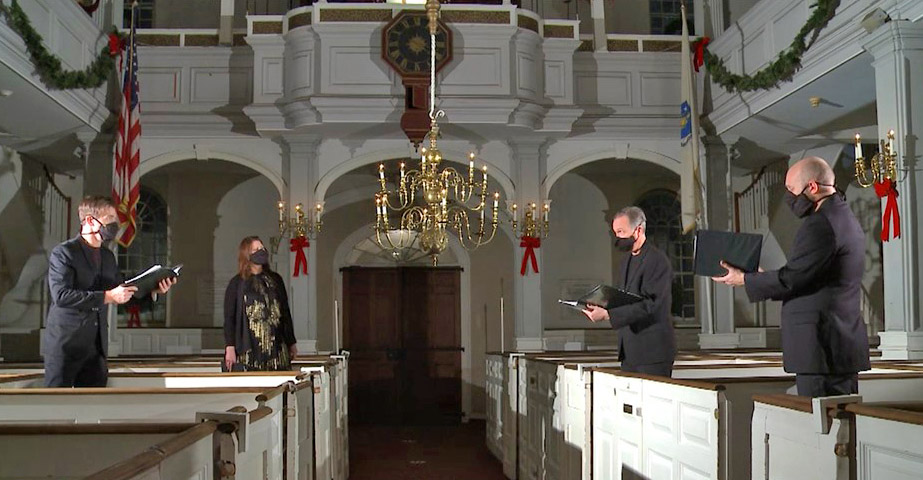 The Camerata has always successfully navigated a tricky boundary in this repertoire. Sacred Harp music is still sung by groups of amateurs, and in the wild in can have a raucous, even chaotic quality that gives it immense energy, but which can blur the structures. Formally trained singers can transmit all the details but often they feel uptight and po-faced. The Camerata’s open fifths sound ever gloriously resonant, and tempo or rhythm never become distorted. The music moves solidly and briskly, without any excess of interpretation. Despite some formality, the sonic picture comes through clearly.

Singers Camilia Parais, Deborah Rentz-Moor, Dan Hershey, Corey Dalton Hart, Luke Scott and Azema brought convincing emotion to their work despite being masked. The hushed and reverent mood obtained, even as the fifes (Sarah MacConduibh and Vincent Canciello) played march music in amazing perfect unison much of the time. A through-line of readings from John and Luke supplemented the story told by the hymn texts. An attractive PDF program, complete with texts, accompanied the video. Coming in at less than an hour, the abbreviated concert held our attention every minute, and never wore out its welcome. Who knows how this masked, spectator-less event will look to us in a year or two, but for right now, this show made a fine addition to my holiday season. I don’t ever want to have to watch it on-screen again, though. I need to be there in person next time.