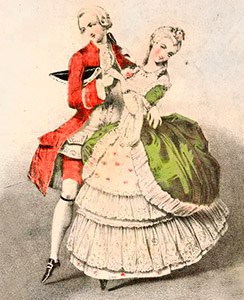 The aristocratic minuet from the 18th century, a highly stylized dance for a couple, or for several couples in a square format, watched over by polite society, was considered proper and difficult, and therefore a social test. We have two feet, but the minuet has three beats to the bar, so the positioning of steps varied between left, right, and together. There are plenty of 32-bar standard minuets in music, 8 + 8 bars, each repeated, followed by a “Trio” consisting of another 8 + 8 bars repeated, and then a da capo. Beethoven’s 12 Minuets WoO 7, 6 Minuets WoO 9, etc., composed in the mid-1790s are typical, and you probably played the Minuet in G Major, WoO 10 No. 2, before you were ten years old because it was in everybody’s beginning piano book — maybe it was the first thing by Beethoven that you ever heard, even before Für Elise or the “Moonlight” Sonata. Schubert’s 30 Minuets, D 41, from 1816, weren’t published before 1889, and meanwhile ten of them were lost. (The Trio for No. 21 is only 15 bars — one supposes an engraver’s error.) Unlike Beethoven’s minuets, which he wrote for orchestra (i.e., ballroom use), Schubert composed his for piano, i.e., for home use.

Examples in chamber music and symphonies, away from the ballroom, are more familiar to most of us, like the third movement of Eine kleine Nachtmusik, with minuet in G (8 + 8 bars) followed by Trio in D (8 + 12), plus da capo. But already in Haydn’s quartets and symphonies, we can divine a tendency toward expanding the boundaries, breaking away from the eight-bar limitations, and exploring a wider tonal range. The third movement of his Symphony No. 82 (“The Bear,” one of the best-loved of the Paris symphonies) has 14 + 24 bars, and the pattern of four-bar subphrases within these larger groups is varied; the Trio section is 8 + 32 bars, with the first 8 repeated as the last 8 of the 32, and in between the tonality digresses from C major to C minor to E-flat major and returning. In the London symphonies, Haydn permits himself even more formal and tonal freedom in the minuets — freedom for the mind, away from powdered-wig formalities. But we all recognize the basic consistency of minuet style: steady quarter-note motion in the accompaniment and in the general texture, in which a departure, like the big fermata at m. 54 of the “Bear” minuet is a dramatic event (followed by a sudden modulation, to be sure). The quarter-note motion matches the speed of dance steps, and this suggests a basic tempo, maybe 100 to 120 to the quarter.

In 1795, when Haydn composed his last symphony, the young Beethoven was already his friend and to an extent his pupil; Beethoven’s Symphony No. 1 in C Major, op. 21, dates from 1800. The third movement is called Menuetto but is already distinctively a scherzo: Allegro molto e vivace, with a metronome marking of 108 to the measure; this is unimaginable as a minuet one might dance to. And stylistically it already has the earmarks of a typical orchestral scherzo: steady quarters, with some rhythmic variation in the melody, and many repeated notes. The first 8 bars are repeated, but the next repeated section is much larger: 72 bars, with several modulations, from E-flat major to D-flat major and back to C. Except for the Eighth Symphony, op. 93, whose third movement is a comfortable Tempo di Menuetto at 126 to the quarter, all of Beethoven’s other symphonies have scherzos, in greatly expanded minuet-and-trio form. “Scherzo” means “joke,” as we all know, but only in Symphonies nos. 2 and 7 is there such an abundance of wit and surprise that we perceive a spirit of jokefulness, a polite salute from bourgeoisie to aristocracy. In the empyrean Ninth Symphony, the scherzo movement comes right after the first, and is of dazzling expanded dimensions: the Scherzo and its da capo are in sonata form (414 bars), and the Trio section is a Presto in alla breve meter. After the da capo there is a spirited Coda with a flashback to the Trio. But the steady quarter-note motion remains nearly continuous throughout everything, supporting the dotted-rhythm octave theme (when the solo timpani play this motive, the joke is justified by the context). In Haydn’s and Schubert’s minuets, the harmony often changes with the quarter-note; in Beethoven’s symphonic scherzos, the harmony changes one bar at a time, and often only every four or even eight bars.

Minuets in Beethoven’s piano sonatas tend to be more songlike than dancelike, with warbling left-hand accompanimental textures and lesser amounts of steady quarter-note motion, although the triple meter is easy to feel. The Sonata in D Major Sonata, op. 28 (the so-called “Pastoral”), contains a genuinely comic scherzo in an appropriately lively tempo; the Allegro vivace, features 32 bars plus a repeated 38 bars; the Trio is 8 + 16 bars, each repeated. The later sonatas follow variable formal practices, often lacking a minuet or a scherzo. The E-flat major Sonata, op. 31, No. 3, has a Scherzo second movement in 2/4 meter; a Moderato e grazioso Minuet follows, with a Trio section that Saint-Saëns used for his Variations on a Theme of Beethoven for two pianos. (Chopin, who seemed to have been of two minds about Beethoven, didn’t like this sonata; I think it might have been because the minuet is sometimes rather like the stately one, also in E-flat, in his own Sonata, op. 4.) The last faint vestige of minuet in Beethoven’s sonatas comes in the expansive and discursive first movement, In tempo d’un Menuetto, of his two-movement Sonata in F Major, op. 54, a seldom-heard but fascinating work that has been too long hidden between the “Waldstein,” op. 53, and the “Appassionata,” op. 57. You can find a more classically-minded minuet (not so called) in No. 1 of the Eleven Bagatelles, op. 119, a late set that Beethoven’s publishers disdained but that was a favorite of the composer.

The minuet didn’t quite disappear in the Romantic era. Mendelssohn’s  Symphony in A Major,  “Italian,” offers a refined orchestral example, with longer, melodically rich subsections, and a legato style, but the overall layout, including the Trio section in the key of the dominant (E major), is like one of Haydn’s. Forty years later (in 1872), Georges Bizet included a minuet in his l’Arlésienne music that is even more classical, beginning with 8 + 16 bars, each repeated, and then a dramatically expanded Trio section, with a solo for the newly-invented alto saxophone, as a gesture to the 18th century. Mendelssohn’s “Scottish” Symphony—four movements played without pause—includes a brilliantly staccato Scherzo, but in 2/4 meter and sonata form; an adroit sonata form marks the equally staccato Scherzo (in 3/8 meter) in the incidental music for A Midsummer Night’s Dream; every first flute player remembers the 34 bars of running 16th notes without a place to take a breath. (Maybe that was intended to be the joke.)

With Chopin, the scherzo form all but totally exploded, though his four separate examples (not counting the movements from the last three sonatas) all exhibit the minuet-and-trio outlines and are all in 3/4 meter. The most radical is No. 1 in B Minor, op. 20, with the wildest kind of original pianism. The Presto con fuoco tempo, 120 to the measure, moves mostly in eighth-notes, which amounts to 12 notes per second at that metronome marking, “demoniac, ‘boiling’ music,” as Hutcheson called it. Schumann was not exactly baffled when he asked rhetorically, “How is gravity to clothe itself, if jest goes about in such dark veils?”

Except in Brahms’s, many later Romantic symphonies contain 3/4 scherzos, think of Dvořák’s and even Bruckner’s or Sibelius’s. In the interior movements of his symphonies, Mahler preferred Ländler forms (if they were to be in triple meter); such German dances share kinship with the waltz, but breathe the open air of meadows and mountains rather than the claustrophobic ballroom. But let’s save that for another story.