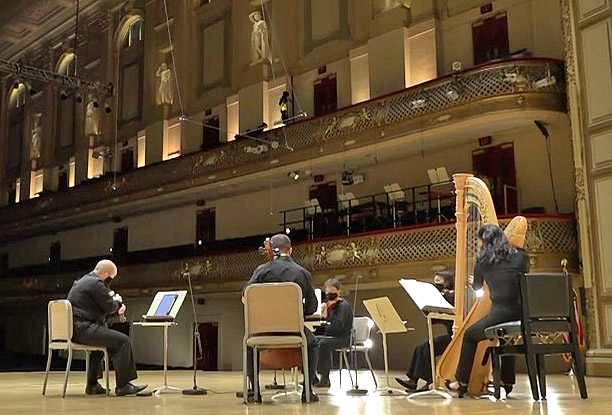 The third concert of this streaming BSO season, and the concluding radian of its narrative arc on America’s Promise, proffered music by Copland, Tower, Barber, and Adu-Gilmore to illustrate the thematic “optimism and openness as well as resilience and self-reflection.” Marcelo Lehninger carried the baton on December 3rd.

Straightaway came the opener, a solid and thrilling reading of Aaron Copland’s Fanfare for the Common Man.  Written in 1942, premièred 1943, this now-ubiquitous composition for brass and percussion did not enter the BSO roster until 1980 although the reworked version, found in the Finale to his Third Symphony, has been a BSO staple since its 1946 première with Serge Koussevitzky conducting. Steven Mandel’s noted that the Fanfare presents “a certain nobility of tone, which suggested slow rather than fast music.” The title reacts to Walter Piston’s Fanfare for the Fighting French: “It seemed to me that if the fighting French got a fanfare, so should the common man, since, after all, it was he who was doing the dirty work in the war.”

Copland’s Fanfare fittingly preluded Joan Tower’s Fanfare for the Uncommon Woman No. 1 (1986; premièred 1987), which uses the same instrumentation and opens with an “original theme [that] resembles the first theme in the Copland. Tower dedicated it to “women who take risks and who are adventurous” and especially “the conductor Marin Alsop.” This first in a series of (now) six pieces by the same title centers the experiences of women and celebrates their rupturing of limiting societal conventions. Tower’s Fanfare builds more emphatically with a greater sense of propulsion, impelling us all with percussive force all into a more equal future. It was nice to see one female musician on stage for this performance.

The string players of the BSO essayed Barber’s Adagio for Strings, op. 11 (1936). Although now associated with occasions of national mourning, Barber considered this music of sublime happiness, according to biographer Barbara B. Heyman, whose lecture included original source material. Now it is hard to hear in these lushly romantic notes, which begin in quiescence and build to more impassioned heights of emotional intensity, anything but an outpouring of elegiac grief. At the climactic moment before the fermata, the BSO valiantly tried to capture this ecstasy; marcato notes at the end preceded the fade into silence.

The music paused for a feature, “Ballet for Martha,” by way of introducing Copland’s Suite from Appalachian Spring. Written and narrated by Janet Eilber, Artistic Director of Martha Graham Dance Company, this segment traces the œuvre’s genesis, opening with a quote from Martha Graham’s scenario for the ballet. Choreographer and composer collaborated to capture the “essence of America, the bone structure, the inner frame that holds together a people” (to quote from this video’s script). Graham, quoted here, wrote to Copland that:

I have wanted a definite thing which is hard to get … a gentleness without sentimentality and a sense of the universal without being symbolic. It is hard to do American things without either becoming pure folk or else appearing a little like a mural in a middle western railway station or post office…

I knew certain crucial things … that Martha’s ideas had to do with the pioneer American spirit, with youth and spring, with optimism and hope. I thought about that in combination with special quality of Martha’s own personality, her talents as a dancer, what she gave off, and the basic simplicity of her art. Nobody seems anything like Martha, and she’s unquestionably very American.

As Graham danced the Bride in this ballet, she expressed what is here characterized as the independent American personality as well as what Graham herself described as the role’s “joyous quality, … the electric eagerness about it, an eagerness for destiny that is the unconscious partner of youth.” Together they strove to express a profundity and a simplicity (which Graham compared to the almanac). Elsewhere and again quoting from their correspondence, Graham praised Copland:

I keep thinking of various parts of your other music, Aaron. There is the unforgettable quiet part of your Lincoln work, that is so beautifully woven on the loom of this country without seeming to use any folk material. It gives me the feeling that I hear it. Of course I do not. But it is in my pulse somewhere.

In this ballet much of this weaving is expressed in variations on the Shaker hymn, “Simple Gifts.” The story changed between initial scenario and first performance and Copland’s music inspired Graham to envision, embody, and portray different scenes in this ballet. As for the title, the anecdote recorded here is worth repeating:

The naming of the ballet was a favorite story of Copland’s. He said that when people would approach him and tell him how much they loved the score, that they could just see the mountains and smell spring in the air, he was often tempted to tell them that he had no idea what the title would be when he wrote the music. The first thing Copland asked Graham when he saw her at the dress rehearsal was, “Martha, what did you call the ballet?”

Graham said, “It’s from a poem by Hart Crane.”

“Oh,” said Copland. “Does it have anything to do with the ballet?”

The music had always been connected in my mind, Copland said, with Martha’s extraordinary stature as an artist and as a human being. My title had always been “Ballet for Martha.”

This music often considered quintessentially American is in truth a product of two artistic titans coming together to produce an enduring work testifying to their profound respect for one another.

The pared down forces of the BSO betook themselves to the expanded stage and balconies of Symphony Hall for the 1945 orchestration of the suite from Appalachian Spring. Copland’s expansively open music, cited as characteristically American, here shines in its open fifth harmonies and serves the narrative of open and inclusive American Promise this program proposes. This performance sounded solid with a series of thoughtful solo lines delivered with the expected customary grace and sang froid. The suite offers a pastiche of familiar sounds which do seem disjointed and episodic absent the dancers or full score; someday it would be wonderful if the BSO and Boston Ballet joined forces to stage the complete version in all its multifaceted glory.

Composer Leila Adu-Gilmore in a brief video interview (edited so only her portions are broadcast) introduced her chamber piece which rounds out this show: Alyssum, for harp and string quartet (2014). Combining her own multinational biography that travels from London to New Zealand to New York City, with stops in many other places on several continents, Adu-Gilmore offers a plethora of additional perspectives. Her compositional voice provides a timely reminder of the role of immigrants in American culture—even as their dream of a promise has long been deferred. This quintet pays tribute to her mother, Alison Gilmore, and takes its name from the hardy flowering plant that the composer associates with her mother, with her own childhood, and with getting through hardship. In her note reprinted in the program, the composer mentions some influences:

Mum sent me an email with a YouTube video of a scene from Pedro Almadóvar’s film Talk to Her where Caetano Veloso sings ‘Cucurrucucú Paloma’: at the same time, I had been really getting into Antonio Jobim. Therefore, upon finding our shared love of bossanova, I decided to add the theme of common tones to my cantus firmus, as well as harmonies descending by semi-tone and bossa rhythms, especially in the final section. The high A could show my mother’s enduring spirit. You can hear her initials, Alison Barbara Gilmore, as a theme. There are also themes of waves, pools and waterfalls, as she loves nature, especially the sea.

Premièred by harpist Sivan Magen and the Mivos String Quartet, it has enjoyed many performances by many different musicians; Leila Adu-Gilmore welcomes each one as unique, her musical idea spreading and growing much like flowering alyssum.

Jessica Zhou (harp), Haldan Martinson (violin I), Lucia Lin (violin II), Steven O. Laraia (viola), and Alexandre Lecarme (cello) took centerstage. Beginning with the harp and expanding to pizzicato strings, there is a delicacy and a strength, a bite or persistence to this music from the beginning. The harp initiates more melodic phrasing, then bowed strings pick up their cue; now the bossa nova influence is heard and the second violin sounds a charming melody. Throughout its 12-13 minutes, pleasure and a grace recall the plant’s other common name of “sweet alyssum.” That suffuses the whole and this traversal conveyed this dimension perfectly, from sweetness of intonation to softness of touch to rounded tones of melodies. Adu-Gilmore’s Alyssum made for a fabulous discovery.

This concluding pinnacle of the three-concert narrative does not, however, paper over all of the shortcomings in “American Promise.” While the BSO has undoubtedly worked to form a more perfect union here in this beacon upon a hill, we still have clay feet, or boggy underpinnings to Symphony Hall (if you prefer). We cannot move forward until we face our history, both bad and good; in earlier reviews I have pointed out some missed opportunities to embrace a richer, fuller, more complex history of the Boston Symphony Orchestra and the city which it synecdochically represents. A better fit for this series of concerts would have been Copland’s Lincoln Portrait which the BSO has not presented in Symphony Hall since February 1971. (The Pops have played it more recently and it makes frequent appearances at Tanglewood.) This composition of wartime patriotism for orchestra and speaker had been implicated in Copland’s summons to the House Unamerican Affairs Committee in 1953. This, too, is American history. The curious can learn more about this idea of an American promise HERE. What other now-canonical masterpieces might this composer have wrought had he been supported and valued instead of suspected and questioned? Why not invite Marin Alsop to conduct the BSO in Symphony Hall (something she has never done), especially as dedicatee of Tower’s Fanfare for the Uncommon Woman No. 1? Features portraying the organization’s history could have included Project STEP and the BSO’s ongoing support of these valiant efforts to make the orchestra’s musicians representative of the population as a whole.

On balance, this series leaves me with an impression of promises unfulfilled. This is deeply regrettable, especially considering the stellar revelations of some of the music. As the leadership of the BSO has turned the orchestra into a production company and released these slick streams, it is too bad equally stellar attention was not brought to bear on the full and complex history of a single American symphony in all its imperfections. The BSO has the stature to bear the scrutiny and to show leadership here, and the audience possesses an attention span well beyond management’s expectations.

Comments Off on Concluding Thoughts on America’s Promise