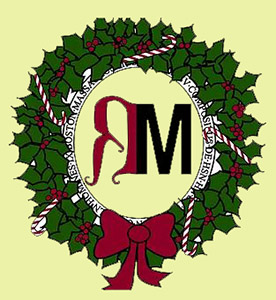 Unfortunately, in February Means and RenMen discovered a technical problem with a key piece, Saunder Choi’s “Angels We Have Heard on High.” The group planned to rerecord it but Covid happened. St. Mary’s Episcopal in Newton, the venue, closed their doors. Other concert locations canceled their seasons, studios likewise suspended work, and the world embraced videoconferencing. Meanwhile, the deadline to deliver fully mastered tracks to the album producer loomed, weeks away, with postproduction work half that.

RenMen scrambled. Anthony Burkes Garza, bass and general manager: “With so many normal solutions off the table, we discussed several emerging options, such as ‘virtual choir’ recordings or multitracking with 3-4 singers performing all the parts. We even considered going forward without that track.” But “Angels” both seemed critical for the album and too complex for virtual recording solutions. “I truly began to lose hope. If we couldn’t rerecord Choi’s piece, our second album would miss its scheduled release date of November 2020, timed for Christmas sales,” pointed out Peter Schilling, baritone and business manager. “We would ultimately have to push the release to November 2021, with nothing to show for 2020.”

RenMen therefore determined to record “Angels,” for the last five years, a cornerstone in the group’s Christmas gala. And they couldn’t envision the album without Choi’s thrilling compositional techniques. He  “showcased the flexibility of the carol by setting it in Gregorian chant, gospel, show choir, etc.” Recognizing that RenMen were “one of the most polished lower-voice ensembles in New England,” he felt honored to have them record his work. Eric Christopher Perry, tenor and artistic director: “Saunder’s Angels has been a favorite of our regional audiences over the years. We were so excited to bring this electrifying work to life in a way only RenMen can.”

At the 11th hour, RenMen approached the Episcopal Church of the Redeemer in Chestnut Hill about using its sanctuary for a few hours for recording. While Redeemer had been an early adopter of Facebook Live and YouTube for providing virtual services to parishioners, church music director Michael Murray noted that “All of the research was showing that, if singing were to be done with masks, and distanced, with good ventilation, and other precautions such as staggered arrival and departure, we could safely manage the risk. It’s common sense now, but at the time when we were starting to reengage our musicians, it was pretty anxiety-inducing”. After consulting CDC experts, Murray and rector Mike Dangelo began recording service music, anthems, and motets with limited staff, relying on the amazing acoustics of the sanctuary to blend the distant voices.

Doubtful of how the results would sound, RenMen agreed to Redeemer’s requirements that they follow social spacing and mask protocols, and gratefully rerecorded the Choi, distanced and masked, on the last Saturday morning before deadline.

“Breathing with the mask on was probably the most difficult part, but any other barriers the mask created were purely psychosomatic,” said Will Prapestis, baritone, social media consultant, and soloist in “Angels We Have Heard on High.” “It helps being around colleagues and organizations whom you really trust and who have your safety and comfort as their top priorities.”

Surprisingly, the seven-minute track had no issues with clarity, blend, or timbre, matching beautifully with the tracks recorded at St. Mary’s months prior. “Angels” was released as a single on October 17th and the full album on November 13th. Artistic director Eric Christopher Perry “… couldn’t think of a better time to get this music ready for people when they need a boost, especially since we can’t perform live this holiday season.”

Given the conclusions published jointly by the ACDA, NATS, and PAMA last May regarding the perils of public singing, many choral organizations felt overwhelming pressure to shut down. RenMen’s success with “Angels” has encouraging implications for the choral world. Perry views commercial recordings as both a bridge through the pandemic and a model for future work: “We wanted to try it out in a controlled environment … when we go back into the studio in 2021, we will have many of the logistical details worked out and can focus not on the pandemic but on artistry.” Renaissance Men hopes to record two more albums in 2021. The rerecorded track of Saunder Choi’s “Angels We Have Heard on High” proves that social distancing and using masks during a professional recording session can and does work. 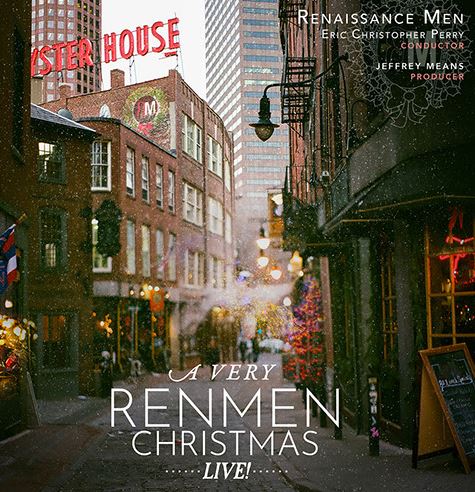 The Renaissance Men are back with their latest release on Navona Records: A VERY RENMEN CHRISTMAS: LIVE! The album, which features lush choral arrangements of traditional hymns and holiday classics, captures the festive spirit of the RenMen’s annual Christmas galas for listeners everywhere.

Following on the heels of their 2019 release, RENMEN LAMENTS, this newest collection offers timeless seasonal chamber music arranged for tenor, baritone, and bass voices. The album opens with soloist Corey Dalton Hart intoning the verse of Some Children See Him; the sparkling clarity of each rounded note is soon multiplied by the rest of the choir, elevating the performance to spiritual heights.

This is followed by Cantate Domino, an invigorating setting of Psalm 96. With its aggressive rhythmic action and sensitive dynamics, the Latin text is presented as an arresting and captivating musical piece. Riu Chiu is a traditional Spanish song, and the RenMen bring it to life with passionate energy against the chattering rhythm of a tambourine. The RenMen treat listeners to favorite classics, as well, but always with that signature sound and attention to detail they are known for. Their rendition of I’ll Be Home for Christmas is a treatment of the song made popular by Rascal Flatts. Blending the choral group’s influences, this number incorporates jazz, country, and popular stylings seamlessly with traditional choral techniques. Later, songs like Jingle Bells and Frosty the Snowman offer a lighthearted counterpoint to O Magnum Mysterium and Angels We Have Heard on High, making this a joyful and inviting holiday album for the whole family.

Steeped in time-honored western choral music and flavored with yuletide fun, A VERY RENMEN CHRISTMAS: LIVE! brings the merriment of the RenMen’s live performances to your living room. Pour some eggnog, don that favorite Christmas sweater, and enjoy this collection of ancient and modern classics.