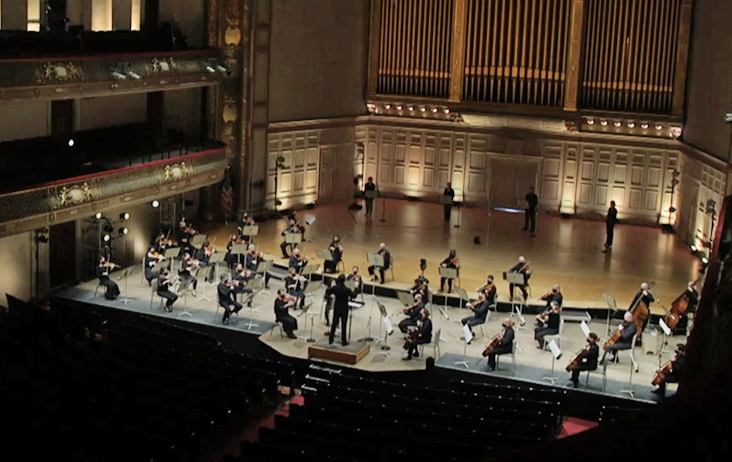 Former BSO Associate Conductor Ken-David Masur (now Music Director of the Milwaukee Symphony) led the orchestra in its inaugural installment of “Music in Changing Times,” a new 15-part series of multimedia streaming concerts [see BMInt feature HERE] bringing Symphony Hall home to us and letting the walls resound once more, after 260 days of silence. Under the BSONow umbrella, the program released today (and available to stream [HERE] until December 19th) inaugurates what is being presented as this year’s Boston Symphony Orchestra season. This opening episode paired Antonín Dvořák with Charles Ives and Florence Price.

In introducing the series, Masur expounded on the various changes we face now and opened up the possibility of these concerts in the context of contemporary challenges and crises. Combining orchestral and chamber music, together with spoken word documentary elements, between now and April the BSO will consider music’s role in times of extraordinary change in history as well as concentrated moments of change in music itself. The first three episodes will explore “American Promise,” described by Masur thus:

“We will look at ways music expresses our highest ideals of pluralism, resilience, and ingenuity, while leaving room to lament our collective failings, how optimistic composers from the first half of the twentieth century strove to create a new American sound, and how today’s composers continue those traditions.”

Lofty aspirations indeed. Music manages to contain such multitudes; I look forward to the BSO exploring all of these goals fully.

Masur turned to Charles Ives by way of introducing the music of this ”quintessential New Englander” whose “unique voice synthesized Christian hymns, folk melodies, and marching band tunes into a wholly new musical language.” From here he linked Ives to Transcendentalist Ralph Waldo Emerson; to give a flavor of this portion of the program, here are screenshots of the quote Masur read:

…hear a sonic representation of traits often linked to America: the three distinct voices become our celebrated pluralism, even as they talk over and around each other, sounding alternately inquisitive, assertive, determined, and accepting. The music itself sounds improvised, revolutionary, and free so that for a few moments we experience in music at least everything our nation aspires to be.… It keeps reminding us that the American spirit is constantly searching, curious, and steadfast.

With these words the music commences on the subdued shimmer of violin strings as we see reduced forces of the BSO, masked and distanced, perform Ives’ music. Absent an audience, the musicians spread across the stage (one player to a stand) and also sat in the balconies; this made for a curiously expansive vision of music I have long considered introspective and a paragon of interiority. Lina González-Granados served as Assistant Conductor, seated on the stage behind the winds and serving to cue winds and brass. While Swafford’s program note teases out “the Silence of the Druids” in the strings, the trumpet (from back of hall second balcony) with “the Perennial Question of Existence,” and winds in their valiant “attempts to solve the question with increasing fury,” I heard here less fury and more incisive commentary. The question remains unanswered as the music returns to silence, but like Tristan’s eponymous chord the beauty of the music does not resolve the tensions and suspensions Ives invokes.

A filmed feature narrated by Callie Crossley, “The Only Light,” compiled archival photos and video footage to place the history of the Boston Symphony Orchestra in the context of American history, offered a rosy portrait: Henry Lee Higginson’s early vision of music expanding upon the European tradition and including American works as well as what we now know as the Boston Pops, “the Boston Six” (Amy Beach, George Chadwick, and Edward McDowell here represented), acquiring audiences, Arthur Fiedler’s lengthy mark on music in Boston, the creation of Tanglewood and the Tanglewood Music Center as musical training center. As with America so the BSO stepped towards realizing loftier aspirations of civil rights for all: the
African-American Roland Hayes, Dorothy Maynor, and Carol Brice all appeared, and the orchestra welcomed to the stage and storied ranks principal flutist Doriot Anthony Dwyer (1952) and harpist Ann Hobson Pilot (joining the Boston Pops in 1969 and becoming BSO principal in 1980). Seiji Ozawa moves from Tanglewood student to BSO conductor. Nelsons steps in on short notice to  conduct the BSO at Carnegie Hall; James Levine is conspicuous in his absence. As Crossley narrates, “At the intersection of history and opportunity, the promise of America—with its ingenuity, resilience, and pluralism—reverberates in the music of the Boston Symphony.” From here we end with the titular quote from James Baldwin. 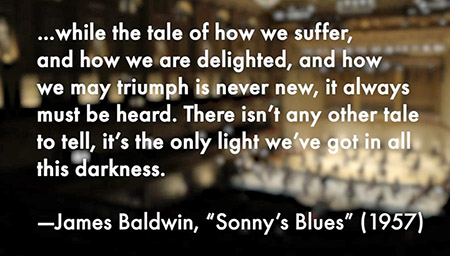 Music returned with Dvořák’s Ninth Symphony, “From the New World.” As Masur prefaces, Dvořák melds what he considered America’s original source music (African-American spirituals and Native American ceremonial motifs) with the European symphonic treatment, hoping “to set a new example for American composers, encouraging them to be open and curious about the tunes that vibrate and hum all around us in the forests and fields.” Tying this back to the theme, he notes that this piece masterfully offers a glimpse of “how our vastly pluralistic culture can live in unity.” This is aspirational and inspirational framing for music familiar today, but which upended cultural expectations in its day and marked an upheaval of societal norms about appropriateness and value. To their credit, the musicians of the BSO brought a freshness and vibrancy, a new life and an edge to this music which by now is so familiar as to verge on banality. We have all heard performances phoned in; this one was not.

We heard greater contrasts and more clarity of inner and harmonic voices, a greater and wonderfully judicious use of rubato and tempo modulations. Transitions between dominant melodies were beautifully joined and had more of an organic quality than I often hear. If I had to characterize this performance in one word, it would indeed be “organic.” As the composer intended, a natural quality obtained, which still found cohesion through all its contrasts, the structure binding the whole here grew from within rather than being an externally-imposed stricture. Robert Sheena shone in the solo theme in the famous Largo.

With reduced forces, masks, and distanced across the stage, this was a leaner presentation of the symphony than we often hear; it would be interesting to know how much levels level adjustment occurred during the recording process with something like 60 microphones. Though intensity and passion abided, it is unclear whether the viscerality of a live performance survived in this presentation or more in my nostalgia.

Callie Crossley returned to narrate “Florence Price and the Legacy of Dvořák.” Contextualized within American geography and history, Crossley herein compared Price to William Grant Still and William Levi Dawson as conservatory-trained Black composers during the era of the Harlem Renaissance and as celebrators of African-American heritage of slave-songs and spirituals. Composer and singer Harry Burleigh gets his due, introducing Dvořák to the American musical equivalent of his own Bohemian folk traditions and inspiring new connections and directions in transforming American tradition into European classical forms.

Price is one exemplar of this change in the musical landscape. From a childhood in Little Rock, musical training in New York City, then teaching in the South before moving to Chicago, Price added new axes of musical heritage into her compositions. She “inflected and inscribed her heritage into traditional European genres,” including collaborations with and settings of Langston Hughes and Paul Laurence Dunbar. Like J. Rosamond Johnson and Harry Burleigh, Price set Negro spirituals bringing them into the tradition of European art-song, including the setting of “My Soul’s Been Anchored in the Lord” performed by Marion Anderson in 1939 in her now-famous Lincoln Monument concert. This feature closed with a summation of Price, her role on this program, and seemingly this BSO season as a whole:

“The ongoing restoration of her music to the canon offers us a sign of hope, even while it illuminates the disservice done to her by time and by the injustices of convention and prejudice. The powerful legacy of this path-breaking composer, once forgotten, is finding new life and inspiring new generations. Florence Price’s music is a sign of promise ever renewed.”

This notion of renewal and correcting the course of tradition is central to this performance and seems poised as a tenet of the season.

Price’s String Quartet in G (1929), here performed by Xin Ding and Catherine French (violins), Daniel Getz (viola), and Mickey Katz (cello), closed the virtual concert. This approximately 15-minute work in four sections opens with an Allegro replete with lush and open harmonies in a hymnic fashion, before invoking popular riffs in quartet guise and managing to cast longing glances back to Bach Cantatas at the same time. Here the melodies dance; the music’s charm recalls Haydn’s Viennese use of folksong. Interspersed with those flirtations come more modern flights of musical fancy. An invocation of a moto perpetuo arrives near the end of this first movement. The Andante moderato opens in a vein similar to the first movement, although now melodic leaps and jumps take on a film score aspect and the theme sounds a phrase hearkening back to Dvořák. The Allegretto here functions as a scherzo, driven especially by the viola. Sadness is undercut by the playfulness of individual voices and a spirit of a cakewalk suffusing parts of the quartet. Modalities shift from major to minor almost with abandon. The concluding Doppio tempo returns us to the sonic world of the opening Allegro. Here the music remains lush and now is playful, coy, and ends in a joyous, if subdued, affirmation. Common practice harmonic practices predominate; it is in the play with rhythm (and rhythmic notation), as well as the melodies themselves, that Price’s individuality and her stature as a Black and an American composer shine forth.

The event as a whole is not the BSO concert experience we have come to expect. With the features and the narration this is “infotainment” of a high order. I have never attended any of the One Day University at Tanglewood events, but I wonder if this season’s concerts are not modeled on them.  There is enjoyment and aspiration here, an engagement with larger cultural conversations we as a nation currently face, and a history which is rosy if not facile. Some moments are glossed over. Transcribing the dense quotes for this review required lots of pause and repeat in a video file that is not bookmarked into chapters and seemingly has no captioning option available. Doing it justice is worth the effort, though. The traditional concert-viewer may not suffer from such struggles, although I encourage all to engage with the heart of these talks. I look forward to more nuanced and detailed explorations of the “American Promise and of Music in Changing Times” as the series continues.