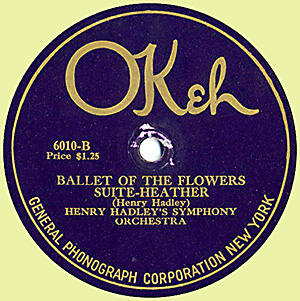 Quick, can you name two composers born in Somerville, Mass? Pat yourself on the back if, in addition to Alan Hovhaness, you identified Henry Hadley (1871-1937), one of that extraordinary generation of American composers born in the 1870s (e.g. Converse, D. G. Mason, Ives, Ruggles, Carpenter, Coleridge-Taylor, Mabel Daniels, Arthur Farwell, Rubin Goldmark, E. B. Hill, Arthur Nevin, Ernest Schelling, Louis Coerne, W. C. Handy, Arne Oldberg, and the proverbial Manny Moore). And, as with virtually all of these, you probably have never heard of Hadley. To set these matters aright, at least in Hadley’s case, historian, lawyer and musicologist Daniel Breen presented a lecture (via Zoom, naturally) under the ægis of the Boston Athenæum on Tuesday.

Plainly an enthusiast for his subject, Breen recounted that Hadley came from a musical family of some local renown, being the son and grandson of music directors of the Somerville school system. By way of a tiny acknowledgment, a plaque commemorates composer Hadley in Somerville’s Symphony Park. Would that there had been even that in some of the other locations in which he made his mark, which was a large one in his lifetime, though obviously not an indelible one. Hadley began music studies at home, but eventually turned to George Chadwick (the two formed a friendship that lasted until Chadwick’s death in 1931, and the two were even neighbors in West Chop on Martha’s Vineyard in the summers). After his Chadwick period, Hadley hied himself to Eusebius Mandyczewski’s studio in Vienna, where he could also soak up the musical culture. On a second trip to Europe a few years later, he sought out Ludwig Thuille, as a teacher, probably on the recommendation of Richard Strauss, whom he also met on that journey.

Between the two trips Hadley gained his first professional experience teaching at St. Paul’s School in Garden City, NY and as organist at All Souls Church in Manhattan. Even more importantly, he made important professional contacts such as Victor Herbert, who arranged for early performances of Hadley’s music.

Breen made the point that Chadwick had focused on the need for an American composer to master the harmonic and architectural contributions of the great Central European tradition, and treated any distinctly American resonance as, at best, secondary (this is perhaps doing Chadwick a disservice, as he was one of the composers of his era who did give those traditions a distinctly American spin, with his penchant for folky Anglo-Celtic pentatonic tunes and drily droll Yankee wit). At any rate, Hadley seldom ventured very far out of the “international” mainstream (one could of course say the same for all those dodecaphonists of the post-World War II era), though his output reflected the richness of Straussian orchestration and chromaticism, of which Thuille was a particular advocate. Indeed, Hadley became one of America’s champions of the tone poem format, penning several quite worthy of modern-day attention, such as The Culprit Fay (1909) and The Ocean (1921).

Hadley worked prominently as a conductor. Upon returning from his second European sojourn, he took the position of music director of the Seattle Symphony, and after that became the founding music director of the San Francisco Symphony. Breen makes much of Hadley’s status as the first American to conduct a “major city symphony orchestra,” though parsing that phrase requires a bit of care. One might say that San Francisco was a major city in 1910, but its orchestra certainly wasn’t, though Hadley did much to bring it up to professional snuff (even importing his brother Arthur, who played cello with the Boston Symphony). And, technically speaking, although Hadley was probably the first American regular conductor of a big-city orchestra, in 1847 Brooklyn-born George Frederick Bristow conducted his own music with the New York Philharmonic (Bristow was later passed over for the music director job). Not only was Hadley the first American SFSO conductor, but also, it is telling, as Breen explained, that not until Michael Tilson Thomas was there a second. This testifies both to the willingness of the orchestra’s trustees to take risks in 1910 and to their timidity in all the time in between. Hadley consistently sought to perform American music, even works that did not hew to his own stylistic preferences; he also pioneered in the use of lighting and other dramatic performance enhancements.

After management forced him out of his San Francisco position over complaints that the SFSO hadn’t met BSO standards (though it was infinitely better than the dance band it had been at its inception), Hadley returned East and eventually became an assistant conductor with the NY Phil, with whom he led many touring performances in the US and overseas, as well as in special performances such as the one mentioned below. It was from his association with the Philharmonic that he embarked, in the 1930s, on efforts to create a summer music festival in western Massachusetts (you know which).

Breen also pointed out one of Hadley’s unheralded achievements: his early association with film music. Though Hadley was hardly the first to write a score for a then-otherwise-silent movie (Saint-Saëns earned that distinction in 1908), he did write the first synchronized feature score for the Vitaphone sound-on-disc projection system. He actually did two: an arrangement of pre-existing classical numbers for the 1926 John Barrymore pre-talkie Don Juan [trailer HERE], and a year later an original score, for Barrymore’s When a Man Loves (on Manon Lescaut). In both of these, he led the NY Phil. He also led the orchestra in radio performances—one of the first to do so.

Throughout his lecture, Breen tossed out anecdotes and assorted fun facts, such as that Azora, the third of Hadley’s five operas (1914), was, at its premiere in 1917, the first American opera to be conducted by an American (himself) in an American house (Chicago Lyric) with an all-American cast. Another of his operas, Cleopatra’s Night (1920) ran at the Met, and even repeated.

By the time of Hadley’s death in 1937 he had been, along with the others of his generation and earlier, pushed aside by the sharp-elbowed exponents of modernism. As if to advertise the point, the recording of Hadley’s second quartet linked below, recorded just 18 years after its composition, is performed by “The Society for Forgotten Music Quartet.” In our times, with a greater appreciation of stylistic diversity and a wariness of the notion of teleological historical inevitability, we can, if properly guided, rediscover much of the musical past that has faded—or been erased—from consideration. It’s refreshing and encouraging to find exponents like Breen who are keen to shed fresh light on neglected musical masters of the past; it’s to be hoped that there will be more of its type.

While Breen did not have time to play musical examples for Hadley, a search of YouTube reveals some interesting items for those with the curiosity to check them out:

Scherzo Diabolique (1934), a mordant and hilarious recounting of a terrifying auto trip in the Berkshires at the breakneck speed of 50 mph.