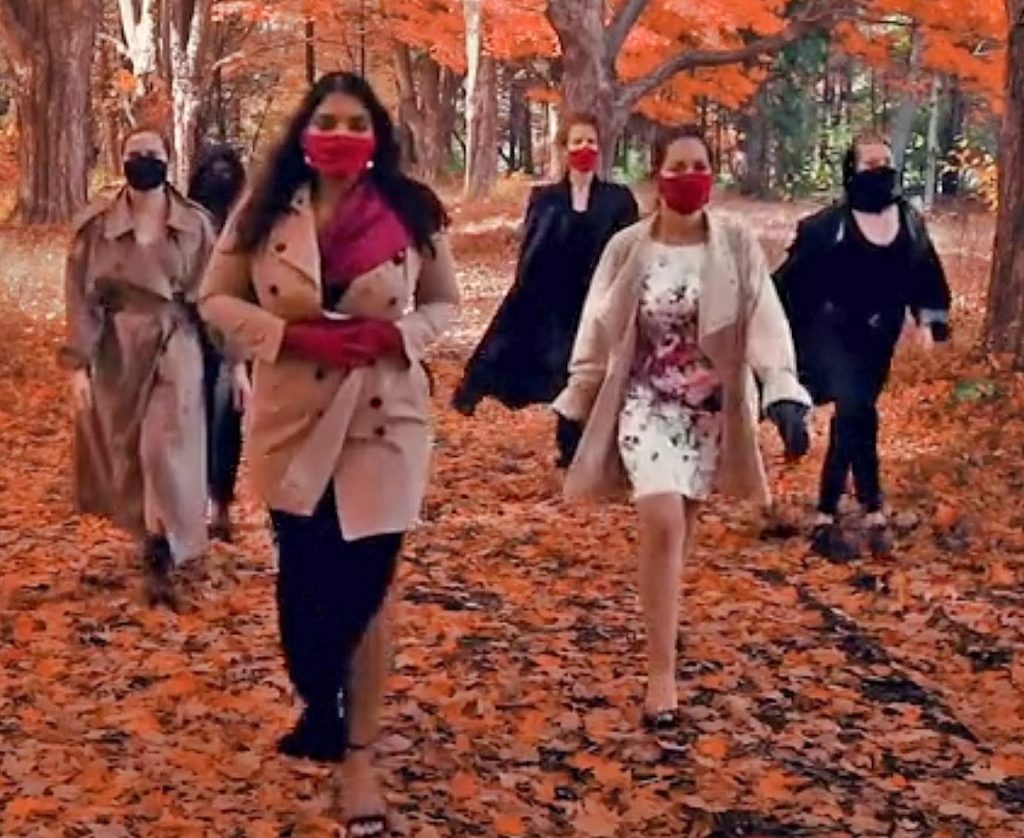 Boston Camerata brings us a virtual confection via Vimeo: Purcell’s Dido and Æneas: An Opera for Distanced Lovers as part of its #SheToo season focused on women in opera. The show, which opened Friday, runs online through November 29th HERE.

Elsewhere in these pages [HERE] Anne Azéma gives us the background for the season and the rational for this production. Drawing on Boston Camerata’s tradition and depth of engagement with Purcell’s work and showcasing music students at Longy School of Music at Bard College, the team modified its planned programming and conceived a confection for the Covid-19 constrained. As any maître pâtissier knows, conception and execution are not the same.

Mezzo-soprano Tahanee Aluwihare brought a depth and maturity to the titular role of Dido, belying the singer’s paucity of years; the Carthaginian queen is a mature character and an established leader, deceived by the gods into this ill-fated love match. Aluwihare captured this conflict memorably. Soprano Camila Parias sang the role of Belinda. (In Poet Laureate Nahum Tate’s telling, Belinda is Dido’s sister; most other authors retain the Vergilian name for the sister, “Anna.”) For this role of the faithful sibling and stalwart support to Dido, Parias brought a light sweetness and innocence of voice well attuned to this role. Bass-baritone Luke Scott embodied the second titular role of Æneas. With the plot stacked against him, this role of Æneas is a challenge to represent sympathetically; Scott sang well and gave us a character true to the story. Regrettably some noticeable audio distortions proved bothersome; I wish this had been fixed before the show “opened.” Tenor Jordan Weatherston Pitts interpreted the Sorceress with style, shiver,s and sensual pleasures in being bad. The small supporting ensemble portrayed Purcell’s music with nuance and sensitivity.

Dido and Æneas is a challenging story. For Æneas, fated to found an empire, Dido is a distraction, almost a mistake, a temptation of what cannot be. Dido, though a powerful ruler, is absolutely a plaything of the gods; this story posits an after-the-fact origin of lengthy historical conflict between Rome and Carthage. The love story, rife with misunderstandings and divine deceptions, is told with vividness and emotion. Augustine wept over the death of Dido—then, being Augustine, leveled recriminations against himself for having such feelings for a pagan, and a fictive pagan at that. In the Purcell and Tate iteration of this long-established tale, Tate replaces the manipulative Olympians (especially Juno and Venus) with dark magic (as Ellen T. Harris points out, drawn seemingly directly from Shakespeare’s Macbeth), and the cave that in Vergil becomes a wedding site for Dido and Æneas and a bower of bliss, here morphs into a scene of malevolent machinations and sinister sorcery hastening Dido’s demise. (The urban cinematography of a concrete underpass underscores this.) Tate and Purcell count on familiarity with the plot as they compress the narrative; this opera stages the conflict even as it merely alludes to its causes, hints at empire, but hones strong emotions, mining them for intense musical drama. Harris’s pre-concert talk marvelously reviewed the many historical challenges in excavating Purcell’s score and explaining casting and performance decisions made here. She drew special attention to the one duet between Dido and Æneas, in Act III at the moment of parting, enforcing what quickly becomes a permanent distance between the two characters (one Vergil underscores in Æneid VI, when the shade of Dido in the underworld turns away from Æneas, refusing to see him). 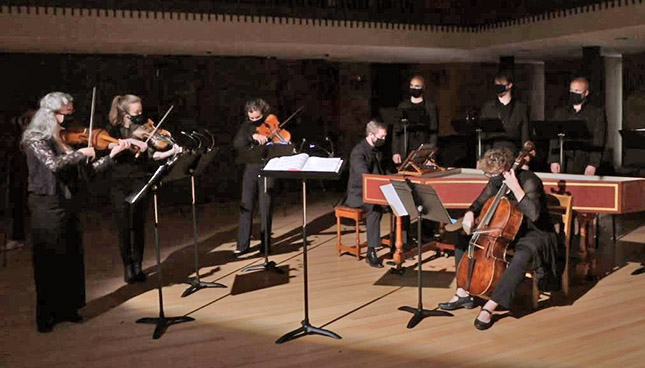 Distance between lovers is not of course a new phenomenon. The late Justice Ruth Bader Ginsburg attributed her long and happy marriage to her mother-in-law’s advice, “In every good marriage, it helps sometimes to be a little deaf.” [HERE]. Of course, for music we hope for distancing other than deafness. Kajia Saariaho draws on the Courtly Love tradition in her opera, l’Amour de loin, with Jaufré Rudel’s poetry in La vida breve (composed prior to his death in 1147CE), a story of love before first sight, here rendered in Amin Maalouf’s libretto. (There is death, too. This is opera. Of which Courtly Love poetry may well serve as literary antecedent.)

With distance comes a change in production values. Distance in microphone placement, though, results in hollow sounds for the peripatetic singers. This performance incorporates music-video-type cinematographic interludes; outdoor locations in Newburyport (filmed October 19th) intermingle with indoor shots at Longy (recorded November 7th and 8th), and so on in this (comparatively) shoestring-budget video…not often do Artistic Directors serve as silent extras to open gates. Restrictions sometimes become opportunities, and this performance set itself many challenges.

A cast of Covid-masked musicians processed into and audience-free Pickman Hall, using all the space in the venue (Azéma describes the imagined audience as viewing from outside the hall’s windows): this is not opera as we have come to experience it.

Distance is a recurring theme in this production. As Azéma wrote: “Our principals will be performing in the same room, but, because of the current health situation, distantly. That is the first sense of our ‘distanced lovers’ subtitle.” 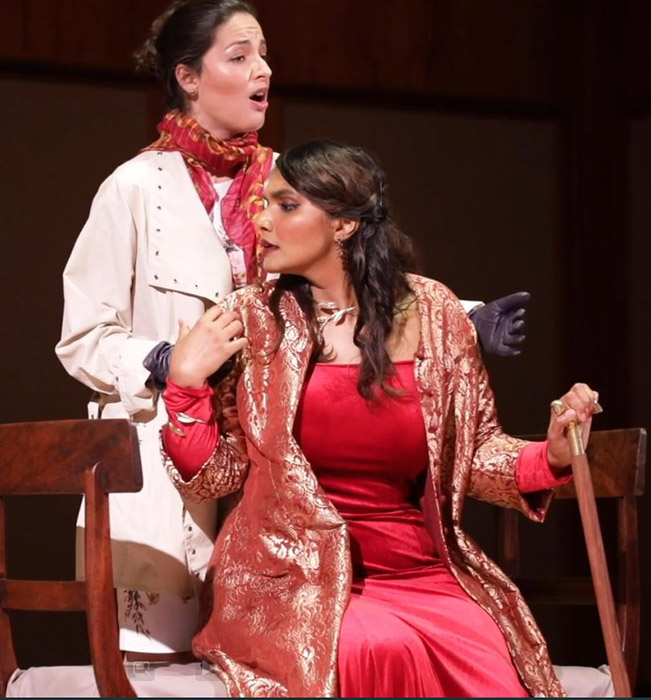 In the outdoor clip at opening, we see more surgically masked cast. As cinematography gives way to concert hall, we initially meet physically separated singers (chorus and players  masked, soloists not). This quickly gave way to what becomes shocking proximity of principals, both in singing and silent staging. (I am reminded of comments from earlier in March about how shocking physical proximity now seems to us, even from shows or films produced only a year ago.) At times this seemed a deliberately excessive choice, as in Act II when the Two Witches joined the Sorceress; one witch’s black veil could seemingly have been a more masking costume choice and others could have followed suit, or Dido and Æneas in intimate if silent staging. I queried this and was informed that all involved in the production had tested negative before they could enter Pickman Hall for rehearsals or performances; despite sanitation, ventilation, and distancing guidelines, principals chose to present some moments in proximity and the artistic and production leadership team agreed with these decisions. I found this upsettingly distracting; it detracted both from the promised distancing and from this viewer’s received experience. From the earliest proximal interplay among principals in Act I, I started channeling the opera’s concluding lines, “Away! Away!” This rather spoils the narrative arc. I also question the morals of anyone filming such scenes of physical intimacy today, especially as infection rates and deaths increase exponentially. Fatigue sets in. Absent is any clear national guidance or direction when we so desperately need it. More than irresponsible, this strikes me as immoral, unethical. There are challenges in producing live music now; many other organizations are finding ways to do so safely under current conditions, without inciting concerns among audience members. I deeply regret that the Boston Camerata fell back on outdated staging traditions rather than rising to these challenges.

Comments Off on Distanced Dido