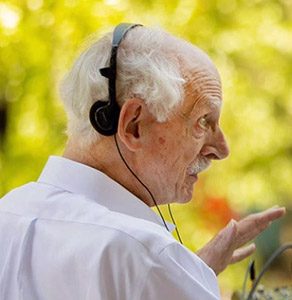 David Elliott died last night after a two-year battle with amyotrophic lateral sclerosis. I saw him a few hours before he died, and can say that his end came peacefully and without pain.

David was enormously important to WHRB, to the Boston classical music scene, and to many of us personally.  His leadership, his dedication, his enthusiasm, and his tireless insistence on excellence inspired generations of students and listeners alike.

I am deeply saddened by this loss, and with the Elliott family will be coordinating with on David’s wishes for his remembrance.  Our hearts and sympathies go out to all who knew and admired David.                          James C.S. Liu

David Elliott, the voice of Harvard’s radio station WHRB (95.3 FM) for 58 years, is going to be featured in the station’s Spring Orgy Saturday from 1 p.m. until 8 p.m. Precisely during the first four or five hours of this period, David used to oversee the broadcast of live programs from the Metropolitan Opera. After each opera, David treated the listening audience to historic recordings of opera highlights, along with insights on performance. For a while, he ran a contest in which the winner would be the fourth, or sixth, caller—a number he chose at random each week. We also heard his mellifluous, cultured voice on many advertisement and public service announcements.

“There is much to be said about David’s 58-year career as an announcer, a mentor for students, and a pillar of Boston’s classical music community,” said Fogelson. “As one listener said, ‘David Elliott was the most important thing to happen to radio since its advent.’ While this may be a bit of hyperbole, it is easy to say he has been the most important thing to happen to Harvard Radio and possibly even, Boston radio generally. David is a great man with an enormous and loyal following that believes he deserves a bevy of public sentiments detailing his legacy.”

“David’s infectious devotion to WHRB has inspired thousands of students to excel and innovate on the listeners’ behalf,” said Jonathan Lehrich ’90, an associate dean at Boston University who was recently named the board’s new chair. “The station will continue to thrive, hearkening always to the ideals that David has exemplified.”

And some culled comments from the WHRB site:

“The thought of not hearing David’s voice again tears me apart. He knew more about opera than anyone and he spoke of it with such elegance. No radio announcer will ever take his place in my heart.”

“All I want to say is there is no other David Elliott, period. He is a one-of-a-kind and he will be missed by all who listen to WHRB.”

“I rarely cry but when I heard what happened to David I shed many a tear. I rarely use the word love but describing how I feel about David Elliott, it’s appropriate. David’s broadcast got me through a period of my life when I could hardly leave my home. I felt alone and destroyed but David would find a way to lift me up every time. I only wish I could repay all he has done for me. Please let him know that I know hundreds who feel just as I do. There must be tens of thousands out there that David has affected like this, I just wish we could find a way to thank him.”

“The Boston classical community is already missing its guardian angel. David’s voice brought life and depth to music. David’s knowledge of music is simply unmatched. We all miss his presence on the radio dial but we feel lucky he has trained so many young music minds who will hopefully step up in his place. Tell David that he has touched as many hearts as he has ears.”

We append the 27 comments from the original posting: