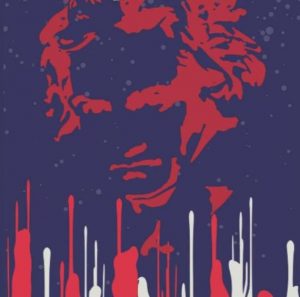 Politicians have forever used and abused composers, artists and performers. In our current dystopia, with the planet beset by climate change, a pandemic, economic instabilities, and facing the possible end of the American Democratic Experiment, life often seems fictional. Into this milieu, versatile musician and author Gerald Elias, creator of a previous mystery series, has cast a thriller, The Beethoven Sequence, released this week, published by Level Best Books [HERE],  explores possible outcomes in a both amusing and cautionary tale. His quick, gripping, and disruptive read stars an unlikely Layton Stolz, a socially awkward welder turned conductor, whose ascent to head a musical cult and, finally, the Presidency of the United States, seems uncannily plausible.

Stolz initially presents as an oafish naïf from rural Colorado, who dreams of a life in classical music, despite virtually no training, only to be rejected by Juilliard, when he finally applies in his early 30s. But Stolz is stolid, persistent. The first half, “Utopia Raised,” explains the motivation that charts the course of Stolz’s life, only lightly foreshadowing the latter, bizarre parts of the second half, “Utopia Razed.” The early chapters let the reader understand how Stolz’s plenteous challenges growing up with a brutal father and a fawning mother set the stage for his many disappointments, odd perceptions, dysphoria and flirtations with delusion and deception. In fact, the bland first chapters subtly hook the reader, so gently that subsequent deaths, justice diverted, blackmail and chases surprise, even stun.

Without revealing the plot, let me say that the story revels in Stolz’s almost happenstance creation of a system of orchestral pursuit that conjures some aspects of El Sistema, the rascally moments of the Music Man and reverential cult-like features of the Suzuki Method. The reader watches with amazement as Stolz rolls them from an initially bumbling effort based on homage to Beethoven’s concepts of liberty, heroism and humanism to, ultimately, a slick, smooth, and secretly sinister organization obliquely founded on some of Beethoven’s most dramatic and deeply felt ideals.

As the story unfolds, it focuses not only on Stolz but on one of his former students, Ballard Whitmore, a young music teacher framed and falsely imprisoned, who, after his release, narrowly avoids assassination. In the end, one wonders, will a local Coloradan investigative reporter whose world intersects with Whitmore and Stolz manage to publish an exposé, laying bare the far-reaching insanity in time to save the day? Well, I won’t tell you here.

Besides entertainment, it is worth remembering that many tyrants have promoted music (Hitler, Mussolini, Stalin and more), and composers have eluded persecution yet been true to their own beliefs through composing with code (think Shostakovich). In Elias’s tale the worship of a long-deceased composer placed into a bastardized “system” that jumps from teaching music skills to derailing politics is absorbing, even riveting.

Particularly attractive for music lovers, Elias’s clear love for Beethoven provides a compelling foundation beyond that of the thriller genre. The idea that children and adolescents might be drawn to the noble aims of Beethoven as they progress through study of some of the master’s most inspiring work, is believable. The conversion to politics is sly, complete with an interview of an insouciant Stolz by none other than Rachel Maddow.

Elias succeeds in this book by providing the key elements required for this genre—a good hook, an engrossing narrative, atmosphere, a crime (at least one), hints found in retrospect, a villain (at least one), sleuths, foreshadowing, false starts and dead ends, and, finally, a satisfying denouement.

Here, the hook for most musicians and music lovers will be the deep and amusing knowledge of classical music and what make musicians of almost any stripe buy in to a given event.

Elias, a former BSO violinist who has divided his time between Salt Lake City and the Berkshires for 30-plus years, loves teaching, which shines through in this latest work. His other books include the Daniel Jacobus Mystery series—Devil’s Trill, Death and the Maiden, Danse Macabre, Playing with Fire, Spring Break and more. Since 1988 Elias has been the Associate Concertmaster of the Utah Symphony, first violinist of the Abramyan String Quartet and the Music Director of the Vivaldi Candlelight concert series. An adjunct professor at the University of Utah, he also writes nonfiction and teaches us in all of it. This latest example makes for a fine interlude; it would be an entertaining film.