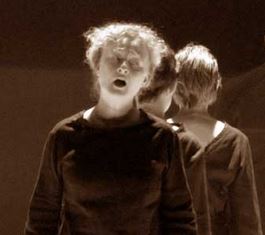 Wandering singers and dancers will re-emerge from the proscenium in a 2012 production that BMInt featured HERE.

Sixteen years after its première, at Le Havre, France, in 2004, and after more than 70 performances in Europe, North America, and Australasia, “Borrowed Light,” an ambitious music-and-dance extravaganza, based on original Shaker songs I gleaned mainly from years of original research at the Shaker Library in Sabbathday Lake Maine, and performed, each time, live by Boston Camerata soloists and dancers, has yet, despite all those  many international touring events (and a bulging pressbook with clippings from all over), to be heard and seen in Boston. And yet, we learned just the other day, in a zoom-y conversation with the production’s brilliant choreographer, Tero Saarinen, that his Helsinki-based company plans to revive it a couple of seasons forward from now. Will the show then manage, somehow, to cross the ocean and be presented, finally, in our own hometown?

Meanwhile, we revel in an upcoming streaming representation thereof. On August 20th, the Jacob’s Pillow Dance Festival will be streaming (HERE) a “Borrowed Light” performance from its 2012 festival, in which Camerata and the Saarinen Company had been invited for the second time to sing and dance this work at the oldest American summer dance festival, in its historic performance hall. We hope our many Boston friends and supporters (as well as music and dance lovers from everywhere) will enjoy witnessing that extraordinary  interaction among singers and dancers mingling onstage.

I’d like, also, to express a large measure of personal satisfaction from this announced reprise by Jacob’s Pillow. The festival’s Becket, Massachusetts venue is situated only a few miles from the most important historic Shaker settlements. There is a rightness to performing their songs in their part of the world, just as there was a rightness to the many hours of archival library work Anne Azéma and I did at the Sabbathday Lake community in the 1990’s, bring forgotten songs written down in Shaker letteral notation back into today’s world.  In these current days of confusion and turmoil, we all want to choose “something like a star/To stay our minds on and be staid” (Robert Frost).

Perhaps via this production these magnificent wandering artists, and Tero, and I, will have managed to channel something important into the minds and hearts of our viewers. Please have a look, and please let us know!