The Tanglewood online season is getting more real with each passing week. Prerecorded though they are, most of the concerts featuring BSO musicians or guest artists increasingly embrace more natural forms of pacing, cinematography, and other elements that more realistically mirror a live concert experience. Wednesday night’s Danish String Quartet may have seen the apex of this verismo. When plans to appear at Tanglewood became untenable, the group broadcast a video which seemed in many ways to be a live stream from an erstwhile church-turned-concert-space in Copenhagen. Seemed to be live, only because while the interactions of the players were unscripted (including a cheeky improvisation on a passing aircraft invading their audio), the two-camera setup was produced to a music-video level that would have been quite a feat to accomplish live. In fact, at times the rapid cuts, focus pulls, and even abortive shots quickly abandoned worked too hard to make four seated musicians seem like they were flying through space; we in the States amply appreciate that in many ways, they already were. On my computer screen, when the editing got distracting, I could easily ignore it, and allow the superb playing and excellent sound quality to take center stage.

The quartet, comprising violinists Frederik Øland and Rune Tonsgaard Sørensen, violist Asbjørn Nørgaard, and cellist Fredrik Sjölin, has made a name for itself  over the past decade in large part for the  sheer joy of music making the four players share while collaborating. One got the sense, old church and delicate instruments notwithstanding, that one was witnessing a neighborhood bull session around the tavern table, so comfortable and convivial were these Danes (and one Norwegian) in their creation of art.

Skillful programming augmented the foursome’s savvy video, exceptional audio, and delightful demeanor. Taking a page from the crossover book, they performed only one classical piece, balancing the show with a cycle of their own arrangements of Danish and Norwegian folk tunes. With the classical piece being Shostakovich’s 10th quartet, only about 23 minutes long, one wondered how the concert would work, but it turned out that balancing the hour with folk tunes (both largely unknown to an American audience and cast in modern versions) made for a very satisfying experience. Through their lens, the old tunes became modern; the Shostakovich took on a similar cast. 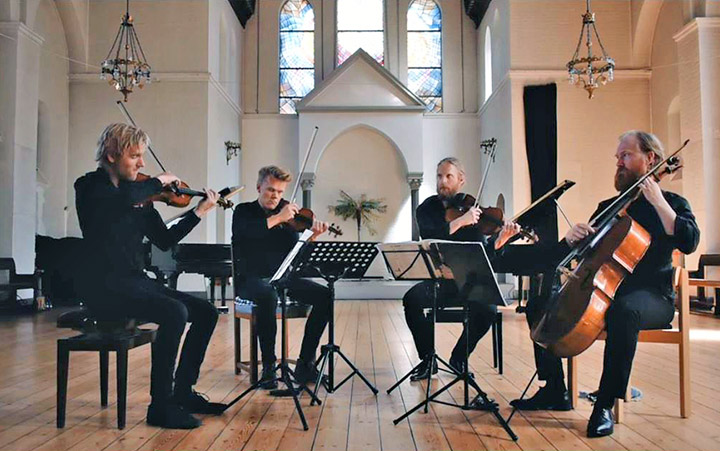 Shostakovich’s Quartet No. 10, in A-flat Major, though probably not the his most familiar, nevertheless displays his typical structural hallmarks: angular melodic cells which dominate the textures, motoric 16th notes, ominous tap-tap-tapping, octave (or unison) violin writing. Yet the 10th also surprises us with magical times when major chords emerge, as if from mist. When approached tenderly, these moments convey the nostalgia-for-a-time-I-never-knew quality of his late works.

The quartet played crisply and capably, highlighting Shostakovich’s economy and intensity. The viola shone throughout; in the 2nd movement, the violins duetted like rock guitarists; the 3rd featured a focused cello which was light even when low. The final movement started with a wind up, which sidetracked playfully and the seriously before finding itself in a mysterious, quasi-ritualistic space. Shostakovich gave the viola a leading role in the first movement, where all the instruments played with mutes. This viola focus balanced in the final movement, when the viola announces the return of the mutes and then of the original theme; piece ends like a mirror of its opening.

The concept of “folksong fusion” or “crossover” has become an inescapable part of the folk tradition. Thus, the ensembles’ arrangements of old tunes sounded firmly modern, almost pop-like at times. A trio of wedding-related tunes opened the second half, including “Ye Honest Bridal Couple,” a favorite of the Faroe Islands. They took a tune they described as “medieval” and laid it on a bed of open jazz harmonies.  Another had the violin so colorfully imitate a reed that one would have thought a piper had entered the session. Cellist Sjölin composed a modern Halling, a traditional Norwegian courtship dance which ends with the kicking of a hat off a tall pole (this would have to imagined), replete with stomps,  chops, scratches; it got immediately down to business with an infectious rhythm. A Norwegian waltz with a windswept lyrical air, blew out to sea too soon. An exultant rendition of a Danish tune “Five Sheep, Four Goats” danced forth as a fantastic reel, which turned slightly introspective before a big finish. The Danish Quartet’s arrangements at times gave a nod to pure folk music and classical scoring, but more often sounded like a rock band, a percussion ensemble, a film score, or your favorite YouTuber’s bumper music. In short, the show possessed the perfect style to make this music relevant to 21st century ears.

Comments Off on Danes Stomp, Chop, and Scratch