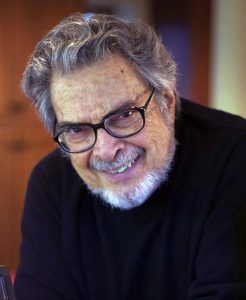 We all heard, and still remember, his early recordings. Nobody played the Brahms D-minor Concerto more mightily or expressively, nor with more persuasive understanding of the music. I first heard him live at Tanglewood in summer 1959 or 1960, playing the Beethoven Third Concerto. Two years later he played in Princeton and I was drafted to turn pages when he played Leon Kirchner’s Sonata. Backstage I mentioned that I had heard him playing the Beethoven at Tanglewood a couple of years before, and he groaned, as if remembering that he hadn’t played so well then, and maybe that was true. “You’re not going to hear me play so well tonight, either,” he said. But he was wrong; if he was tired, it never showed. The Kirchner Sonata came forth with total strength and conviction, as did Schubert’s Wanderer Fantasy, a superb performance. As a page-turner I had a vivid sense of what Schoenberg had once said to Berg: “If you ever have the opportunity to see the way Mahler ties his necktie, you can learn more counterpoint from this than in two years at the conservatory.”

It was only a few years later that Fleisher’s career became cruelly vitiated by the dystonia that crippled his right hand, again as we all know. But we also know how well he carried on, bringing new energy and interest to the Paul Wittgenstein lefthand repertory, and making LH recordings. Eventually a good part of his RH capability returned; I remember reading about a performance of Franck’s Variations symphoniques that marked his return to the two-handed stage. My last view of him was at George Perle’s memorial in 2009, when he played Bach’s Chaconne in Brahms’s lefthand arrangement.

He continued to teach until the age of 92, and then last week he died. A well-lived life of an unforgettable musician. And those recordings are a permanent legacy as well.       by Mark DeVoto

Leon Fleisher was of the same generation as Charles Rosen, Alfred Brendel,  and our own Russell Sherman. There are many other pianists from the time, of course, but Fleisher’s interests lay, as with those three, in a sober, deeply structural, historically informed and score-faithful approach to the master composers of the classical repertory, the three Bs plus Schubert, et alia. The epithets ‘cerebral’ and ‘intellectual’ attended these performers, for better or worse, exactly as ‘craggy’ attended Rudolf Serkin, Fleisher’s similar predecessor. Each could play in ravishing colors, Fleisher above all, but it was never the point, and this was a chief difference with the starrier stars in the galaxy of that keyboard generation.

Fleisher technically was much more capable than Serkin; indeed, reviewers regularly observed that Fleisher sounded quite like his childhood teacher Schnabel except for having far superior technique. Alex Ross has a nice quote from a Fleisher masterclass (Schubert) not long ago: “There are so few notes, but so many implications; … so few notes, but the implications go back billions of years. You have to be like the Hubble Space Telescope, which sees stars as old as the universe. The stars are dead, but their light is reaching us just now.”      by David Moran