Yo-Yo Ma and Emmanuel Ax brought nourishment for body, mind and soul in their broadcast from Tanglewood to this wise consumer.

The wise diner selects an appetizer taking into consideration the meal to come, and last night’s consummate duo chose wisely in opening their show with an arrangement of the Adagio from Brahms’s Sonata in D Minor for Violin and Piano, as arranged for Ma’s cello. The movement is mournful but also ravishingly passionate; intimate and yet universal. These themes would be expounded upon, contrasted, and intensified throughout the evening. Ma dedicated Brahms’s gem “to all the people we’ve lost,” and the artists polished it to a lustrous shine.

While we waited for the main course to arrive (Beethoven’s Sonata No. 3 in A Major, for piano and cello, Op. 69), Ax treated us to some delightful dinner conversation, explaining how, even though the third sonata is relatively upbeat, Beethoven appended to the dedication the phrase “amid tears and sorrow.” This was possibly because he composed it in 1808 when his country was under occupation, his hearing was almost destroyed, and his personal agonies abundant (possibly from the incongruence of his desire for universal brotherhood and the stark realities of human nature). Indeed, with this primer, one hears in this ostensibly optimistic work an underlying tinge of the dust blown in from reality, which dims even the brightest idealistic lamps. The phrase that ran through this reviewer’s mind during the masterful first movement was “Sunny, but…” with a particularly pregnant dot-dot-dot. Even the cheery theme’s final recap, marked “sempre fortissimo” comes off like a brave façade ― at least once Ax’s seed had taken root.

They played as two unbelievable talents who have collaborated for decades with the God-given honesty and humility which has endeared them to millions. In his limpid scales in the second theme, Ax burnished crystal; Ma imbued every single note with its own backstory. They devoured Beethoven’s thematic and rhythmic shifts, making one believe that, in the development, the German master was the progenitor of heavy metal (he was). The scherzo, which Ax described as “insane” and Ma as “the rhythm of nature,” came off as a seamless synthesis of the two. The third movement contained a transitional Adagio which the pair made promise its own movement, and the Waldsteinian bubble of the true finale leaned heavily on its foreboding development yet highlighted its bright but somewhat disembodied conclusion. 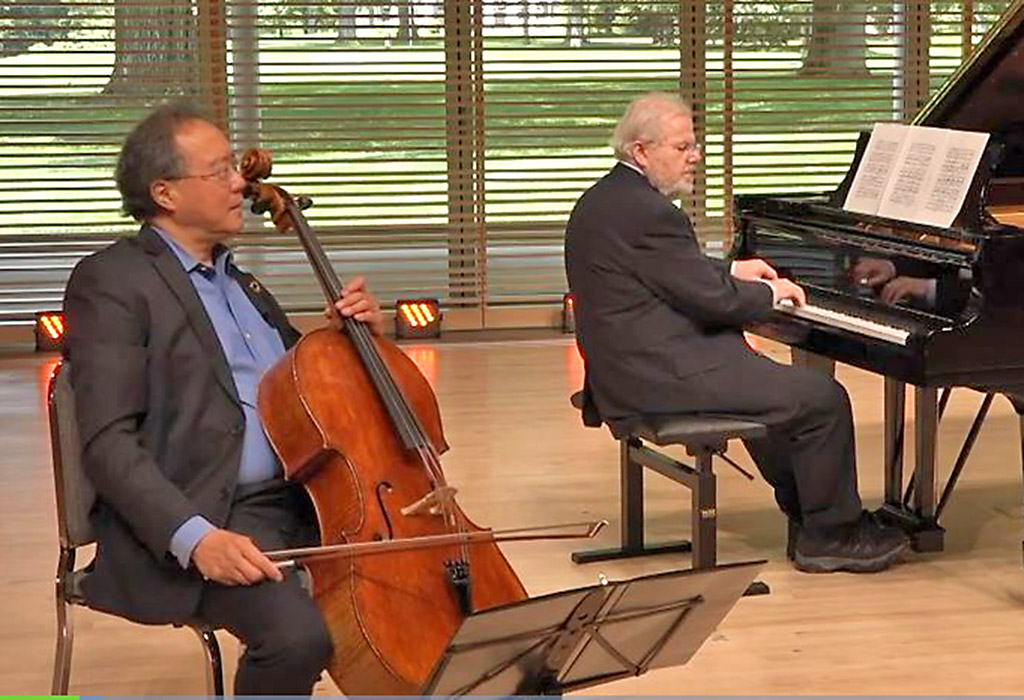 Cue the recline into the chair: the meal was complete. Cue the belt-loosening, smoke-’em-if-you-got-’em (remember those? they won’t come back) atmosphere and the real conversation. No pretense. No nonsense. Well, perhaps some nonsense, but more like a welcome inanity. The friends again diverted into a conversation, this time more charming and disarming than before.

Ma: (as the last chord still rang) We just played one of our favorite sonatas…Ax: Did we? Conway and Burnett couldn’t have written (or timed) it better.

The coffee, scotch, and after-hours nibbles came to the table from Mendelssohn’s Op 109 Song Without Words. Mendelssohn seems to be the music which will always be welcomed even after the proclamation “I can’t eat another bite!” Though dedicated to front line workers on this night, this performance constituted something of a love song to music itself. Performed in its original version for cello and piano, it was at times sumptuous, tempest-tossed, but always intensely secured and just the right length.

Ax and Ma provided a refreshing stop along this summer road of there-but-not-quite-there performances, paying tribute both to musicality and friendship. Beyond that, they artfully broke through the fourth wall and transported us beyond our ordinary lives.