As everybody, including musicologists, begin celebrating the 250th anniversary of Beethoven’s  birth, I throw in few observations on Fidelio, which I heard for the first time only in graduate school; it certainly opened my understanding to all of the rest of his work.

It is said by some that the technique of the leitmotive (my preferred English spelling, without italics, which would imply actual German: Leitmotiv, singular, or Leitmotive, plural) in opera originated with the 18th-century melodrama — instrumental accompaniment to interspersed or overlaid spoken dialogue. A 19th-century melodrama illustrates the type: the second scene of Act II of Fidelio, immediately after Florestan, chained to the dungeon wall, has heroically exerted himself in a hallucinatory aria and collapsed in utter exhaustion. Leonore (still disguised as the boy Fidelio) and Rocco, the jailer, descend into the dungeon and exchange spoken dialogue in whispers between short bursts of indistinct orchestration.

After a few bars, the oboe plays a short melody, Poco adagio, that we recognize from the previous scene, as part of the obbligato to Florestan’s outcries; this bit of oboe signals to Leonore and Rocco that Florestan is still alive but moving in his sleep. A few seconds later, another melody appears in the strings, with horns, in a different key, E-flat major, 6/8 and Andante con moto; this is a more distant leitmotive, recollected from the finale of Act I, as Rocco tells Fidelio that they must dig out a grave from the rubble in the old cistern “that I told you about.” This scene is brief, only three score pages and with only two distinct melodies recalled from something heard earlier; but it’s possible that Weber had its example in mind when, seven years later, he composed a much more complex and capacious melodrama, the famous “Wolf’s Glen” scene that constitutes the entire Act II finale of Der Freischütz — a scene of black magic that has remained sensational in the history of opera ever since. The Wolf’s Glen is replete with orchestral leitmotives, recalled from earlier moments in the opera for their psychological value — “the orchestra never lies.”

But Fidelio offers another illustration of leitmotive, a short one, that is at once more penetrating and subtle. Its first appearance is in the A major duet (no. 8) between Rocco and Don Pizarro, when the villain commands the jailer’s assistance in the planned murder of Florestan: “You give the sign, and I will slip into the dungeon, masked — one thrust [ein Stoß], and he is silenced.” This last menacing assertion is punctuated by a fortissimo appearance of two trombones — except in the Overture, this is the first time these big instruments are sounded in the opera.

The Pizarro-Rocco duet is followed immediately by an expressive high point, Leonore’s great “Abscheulicher!” (detestable one!) recitative and aria, on an otherwise empty stage, and this is followed by the finale of Act I, beginning with the chorus of prisoners. As they move into the garden in open air, Rocco and Leonore-Fidelio then confer in the rear of the stage, in a lengthy recitative, Rocco informing the boy that they will have to dig a grave in the dungeon below. Leonore, anguished, says, “Is it your job to kill the prisoner?” Rocco: “No — Rocco isn’t hired to do murder, no, the Governor himself will come down there.” At this moment, simultaneous with the reappearance of the two trombones, the “und er verstummt” leitmotive is heard in the bass. (Some recordings, like Klemperer’s, emphasize the four notes with a forceful pizzicato, though that isn’t indicated in the score.) “Both of us will dig the grave.”

Rocco and Leonore then sing a duet, in E-flat major, 6/8, which provides the motivic reference that will be heard in the Act II melodrama, as mentioned. The climax of this duet leads into Scene 11, when Marzelline and Jaquino rush in to announce that an angry Don Pizarro has discovered that the prisoners have been allowed out into the open air without the his permission. Pizarro storms on stage, furious, but Rocco calms him down, saying sotto voce that the two of them can do their dirty work below while the others wander about freely: “Let your anger be saved for that one” [für Jenen sei der Zorn gespart]. The “und er verstummt” motive is concealed within these words. 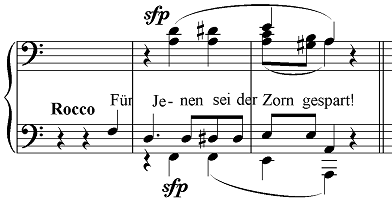 Other leitmotives in Fidelio are strategic and even symbolic, not likely to be noticed except by connoisseurs like you and me, but structural nevertheless. Pizarro’s “rage” aria in Act I (no. 7), in D major, Allegro agitato, “Ha! Welch’ ein Augenblick!” reaches a dramatic climax (“Der Sieg ist mein!” (Victory is mine!) with a fine deceptive cadence to B-flat major, as the prison guards begin a short chorus: “He speaks of death and wounds — now, off on our rounds, it’s something important.” The climax of the entire opera, the confrontation in the dungeon (no. 14), resolves with exactly the same deceptive cadence: D major to B-flat major, as Leonore, now revealed, suddenly points a pistol at Pizarro: “Just one sound, and you are dead!” In the same instant, the trumpet call (on B flat) from the tower watchman announces the arrival of the state minister, and all is saved (“Ach, du bist gerettet”). In the Act II finale, above ground once more, there is a similar deceptive cadence, not D to B flat, but A major to F major, as the state minister, Don Fernando, tells Leonore how fitting it is that she, not someone else, should free Florestan from his chains (“O Gott! Welch’ ein Augenblick!”).

The greatest practitioner of leitmotive technique was Wagner, of course, who developed an entire aesthetic of opera-as-symphonic-poem, to use Joseph Kerman’s phrase, and most operas of the past 150 years have adopted it at least to some extent — yes, even Debussy’s Pelléas et Mélisande. Wagner adored Fidelio, and was swept away by it emotionally in his youth. We know that after Wagner built the Festspielhaus at Bayreuth for the performances of his own operas, he stipulated that the only other music that should be performed there would be the nine symphonies of Beethoven. One can imagine that his appreciation of Fidelio might have been in the background of that choice.

As for melodrama, by the middle of the century it hardly needed the leitmotive anymore. In the opera house, some works by Marschner, such as the creepy Hans Heiling, still hold some interest, and there’s a melodrama in the score of Ruddigore that is never used today. As a quasi-musical genre, melodrama moved into domestic use, for home readings. Liszt wrote several of them, and Richard Strauss’s Enoch Arden (poem by Tennyson; there’s a well-known recording by Claude Rains, reciter, and Glenn Gould, piano) is a very late survivor (1897). Schoenberg’s Pierrot Lunaire, op. 21 (1912), carries the subtitle of “melodramas,” but this work is a special case of every kind. Beethoven himself wrote a standalone example with the mesmeric glass harmonica accompanying the Sprecher.