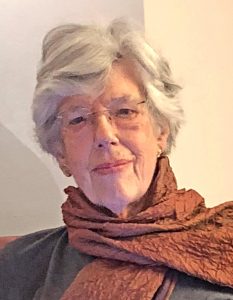 The esteemed musicologist, who died on May 18th from cancer, was one of the Boston Musical Intelligencer’s most prolific and informative writers. She submitted her first review, of Boston Baroque’s performance of Michael Haydn’s Requiem Mass in 2009. Her last one reported on Capella Clausura’s take on the visionary-inspired music of Hildegard von Bingen’s on Feb 23rd. In 159 reviews she covered such groups as Capella Clausura, Blue Heron, the Borromeo Quartet, the Lydian Quartet, Emmanuel Music, Concerts at the Gardner, Cantata Singers, Boston Baroque, Back Bay Chorale, Cambridge Society for Early Music, the Newport Music Festival, Rockport Music, Odyssey Opera, NEC, Shakespearean Concerts, Tallis Scholars, and the Boston Chamber Music Society.

But she penned her greatest number of reviews for concerts put on by the Boston Early Music Festival, both for its biennial music orgies and for its performances during its regular seasons. Kathy Fay, executive director of BEMF, wrote today, “On behalf of the board of directors, artists, staff, and patrons of the Boston Early Music Festival, I am deeply saddened by the news. Her delightful and gentle spirit, thoughtful and illuminating reviews of our concerts, operas, and our biennial Festivals, and generous support of our programs and global work, will be sorely missed. Thanks to Virginia’s profound grasp of the classical repertoire—particularly music from centuries past and especially medieval music—we devoured her concert reviews and always emerged with a much deeper understanding of performances we attended.”

Publisher F. Lee Eiseman noted that “she always brought tremendous seriousness of purpose and scrupulousness of research and observation to her work.” Indeed. Virginia continually educated our readers with historically accurate information. A few of examples of the wonderful cadence she brought to her reviews: of the performance by the BSO at Tanglewood on July 24, 2009: “After the opening outburst of Berlioz’s Roman Carnival Overture, we were treated to one of the composer’s beautifully flexible Andante melodies:  an English horn solo ably played by the BSO’s Robert Sheena and then heard in canon for winds and strings with rustling wind and percussion accompaniment. “She wrote of fortepianist Christian Bezuidenhout’s debut as conductor in a concert with the Handel & Haydn Society, in Carl Philipp Emanuel Bach’s Symphony in C Major, Wq. 182/3, “Beginning in a sunny and energetic C Major in forthright unison, sudden interjections on A flat and F sharp lent an air of sudden darkness to the drama.”

Notwithstanding Virginia’s interest in her main field, early music, her musical tastes spanned many genres. Every summer, beginning around 12 years ago, she attended the Tanglewood Festival of Contemporary Music with a group of music-loving friends (me among them).

Ralph P. Locke, Emeritus Professor of Musicology, Eastman School of Music (University of Rochester) emailed this afternoon that she was “a much-loved figure during her years teaching there. As an accomplished medievalist with a broad interest in early music generally, she brought great enthusiasm and vast knowledge of repertory to the required undergraduate survey course on Western art music from ca. 800 to 1750 (“Chant to Bach”).

“She was enormously helpful to students working on the DMA (Doctor of Musical Arts) degree in instrumental or vocal performance. Many of them, including some who were not native English-speakers, surely recall the close attention she gave to their writing skills. Virginia believed in the power of the written word, and in the ability of performers to find ways to express their thoughts clearly and to share them with others.

“Virginia was a masterful research scholar, writing much-admired articles and book chapters on such important but neglected topics as the lais of the medieval composer Guillaume de Machaut. She had a knack for describing unfamiliar music in a way that enabled one almost to “hear” it through her words.

“With all of this, Virginia Newes was also perpetually kind and generous—a perfect colleague! I always looked forward to catching up with her at musicological conferences, and I know I’m just one of many at the Eastman School that feel we—and the art of music—have lost a true companion.”

Virginia Ervin was born on August 5, 1929, in Bala, Pennsylvania. She attended Radcliffe, got a master’s in Musicology in Brussels, and in 1987 earned a doctorate from Brandeis University. She met her husband, Klaus Newes, on a transatlantic trip. They had three children, but her younger son was killed in the crash of a private plane in which she was severely injured many years ago. Her husband Klaus died in 1974 at the age of 50. Her son Christian and daughter Gabriella Newes-Adeyi survive her. But Virginia did not let tragedy destroy her spirit. As her daughter Gabriella noted, “My mother had a zest for life and found beauty in the world and people around her. She had a deep intellect and passion not only for music, but also for continued learning in art, philosophy, literature, and more. She became more politically active in her last years, supporting several progressive causes. As I am reminded with notes and calls in the past days, she had many, many friends from all over. It is a great comfort to know how loved she was and the joy she brought to others.”