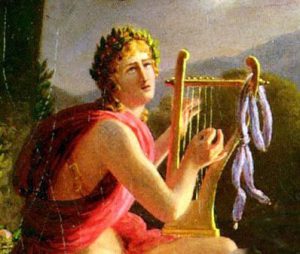 During the current performance drought, your publisher asked me to dust off the manuscript of my book, “Melody and Musical Texture.” Four years after I wrote it, it is still unpublished, mainly because it’s addressed to a limited but widely distributed audience of interested students and amateurs, rather than to conservatories or universities, because departments of music don’t offer courses on melody. Furthermore, textbook publishing everywhere today has turned into a racket.) Let’s begin with the opening paragraph from Chapter 1 (which I might yet revise):

Melody is the wellspring of the human musical mind and feeling. All musicality proceeds from melody, from the most elementary and unformed to the most cultivated and sophisticated. Melody organizes musical sound, and the musical idea behind the sound, as speech organizes thought and statement. Melody is the completeness of song; beyond that, it is the Ariadne’s thread that traces musical time and makes it real, from the smallest musical thought to the largest, from the one-second motive or the five-second phrase to the 70-minute symphony. Melody is the spontaneous and prime manifestation of the composer’s imagination, and it remains the essence of musical substance when all technique and artifice are cleared away. Melody is the first thing we think about when we think of any piece of music; we can identify virtually any familiar piece of music from just a fragment of its melody; in following through the melodic line mentally in real time, we can recreate the entire musical superstructure in our own mind, even without uttering a sound. Every composer begins the compositional process with melody, renewing it every day.

We should imagine that all melody originates in singing — in what we can sing. “The melody” is what we remember, what we usually associate with “the words” in a song — that is, a particular melody. But here we will consider melody more generally, and it is useful to have some terms.

The earliest written-down melody is chant, which is written down on a staff, one note after the other. A typical chant from as early as the eleventh century might be Pange lingua gloriosi (Liber Usualis, p. 957), a hymn sung on Good Friday, with a rhyming Latin text, mostly one note per syllable, sung by a priest or by a chorus in unison. This is pure melody, made up of successive notes, a melodic line (monophony).

A 19th-century Anglican hymn such as “Come, ye thankful people, come,” in what is sometimes called “familiar style,” is polyphonic (many voices), to be sung by a choir of SATB voices, four parts with an organ accompaniment if needed, again mostly one note per syllable, with “the melody” in the upper part. We call this a “homophonic” texture, i.e. equally-phonic, because all four parts move together, and you can hear the text one syllable at a time. “The melody” is what everyone knows and remembers — but in this hymn, there is also a bass line supporting the harmony, and this line, what the bass voices sing, is also a melody; there are also an alto and a tenor part filling out the harmony, and these parts too are melodies, even when the uppermost part, sung by the sopranos, is “the” melody. This kind of polyphony is fairly simple. The alto and tenor parts aren’t very interesting, nor identifiably melodic in the way that the soprano part is, but they are melodies nevertheless, one note after the other, as singers sing them — but if, after the rehearsal, you asked an alto or a tenor singer what “the melody” of the hymn was, they’d sing you the soprano part.

There is also counterpoint in this texture: melodies in combination. A four-part chorale, as J. S. Bach harmonized it, is noticeably contrapuntal, because while the upper part is still “the” melody, the ATB parts, individually, are melodically more interesting than the ATB parts in a 19th-century hymn in “familiar style” like the one above; and yet in this hymn, too, all the parts move together, one syllable at a time, and you can still hear the words.

When “the” melody becomes an identified melody and combined contrapuntally with something else, we call it a cantus firmus. The idea of cantus firmus goes back at least as far as the twelfth century; last week I mentioned Pérotin’s enormous Sederunt principes organum. The Missa Pange lingua by Josquin des Prez is a cantus firmus Mass; each movement begins with a few notes of successive phrases of the Good Friday hymn. Bach’s Cantata no. 140 is a more easily recognized cantus firmus work, a chorale cantata. The first verse of the text, “Wachet auf! ruft uns die Stimme,” is sung by the sopranos (doubled by horn), one note per measure; the slow-moving notes of this cantus firmus don’t even start to sing until the orchestra has played a lot of other music for 16 bars. With plenty of musical space between the successive phrases of text, the entire movement occupies 215 bars of 3/4 to accommodate one iteration of the CF— plenty of musical space, plenty of melodic development in the ATB parts, and plenty of counterpoint in chorus and orchestra alike, buoying up the notes of “the melody” (or maybe it would be more correct to say hanging off — depending on — the notes of “the melody”) for just one verse. The second verse of the hymn text (“Zion hört die Wächter singen”) gives the CF sung by just the tenors, contrapuntally combined with a long, expansive melody of a completely different kind, in unison strings. For many, this movement is the best-known part of the entire cantata. It’s shorter than the first movement — 74 bars of 4/4 — but by this point in the service, the congregation has already heard “the melody” once and thus to some extent learned it.

The four-part chorale appears at the end of the cantata; the melody in the soprano part is by now familiar, and everybody, choir and congregation together, assisted by a lot of doubling instruments, can sing the third verse of the poetic text, “Gloria sei dir gesungen.” The contrapuntal character of the interdependent SATB melodic lines is balanced by the homophony of the whole texture, one syllable of text at a time, forming vertical harmonies that change, more or less, with each syllable.

Bach’s chorale cantatas represent the apex of cantus firmus technique in music — most of all to illustrate that there is more to a piece of music than just a cantus firmus, especially that there are other kinds of melody to be heard simultaneously with “the melody”-that-everybody-already-knows. (Looking back to Pérotin’s Sederunt, one recognizes that the notes of the cantus firmus are probably symbolic, or abstract; in modern notation, 56 bars of counterpoint are required before the second note of the CF appears, and one wonders if anyone will actually listen for the appearance of the next one — was the CF even sung, or was it played on a long-winded organ pedal?) In the second chorale verse in the Bach cantata, the melodically complex upper line, for unison strings, is as different as could be from the plain notes of a cantus firmus; we would call it an obbligato, a melody that, even if you could sing it (like the Swingle Singers), is notably instrumental in character. But what gives the entire verse its musical unity is the elegant contrapuntal combination of three different kinds of melody: the obbligato in the upper part, the cantus firmus in the middle, and the walking bass.

Comments Off on Types of Melody and Their Uses