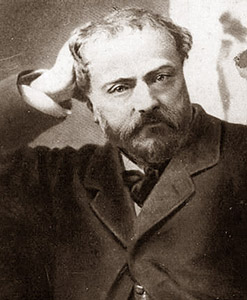 About this time every year I like to put in a plug for one of my favorite unknown French composers, Emmanuel Chabrier (1841-94). “Unknown” isn’t quite exact, but in fact in America he is recognized, if at all, only for the brilliant orchestral rhapsody España (still so much of a concert favorite that it has been handily besmirched in a Perry Como song, “Hot diggity, dog ziggity, boom, whatcha do to me”). In his native France, and almost equally in England, Chabrier is respected and cherished as the most original and most instinctively Gallic of all the composers between Berlioz and Debussy. His mature appearance on the Parisian scene was relatively brief but of surpassing brilliance, and every French composer since has joyfully acknowledged his influence. The composer Jean Françaix, citing Roland-Manuel, said: “Let’s stop rediscovering Chabrier every twenty years. Let’s put him once and for all at his true place, right at the top.” Chabrier was a leading figure in the arts and salons of the belle époque, a close friend of writers, poets, and painters as well as musicians; Manet painted his portrait twice, and Chabrier himself was the owner of Manet’s last masterpiece Un bar aux Folies-bergère (although the shadowy figure in the mirror is probably not Chabrier). A photograph by Nadar shows Chabrier’s huge frame that matched his booming, profane, generous personality, one that was noted for breaking strings when he sat down at the piano.

A native of Ambert, Puy-de-Dôme, in the Auvergne, Chabrier showed early talent and got some training, but at his family’s insistence became a lawyer for the French government, where, he said later, “I lost 15 years.” The years weren’t entirely lost, because he began to write operettas, one of which, l’Étoile (1877), was successful (Opera Boston mounted a delightful production about fifteen years ago). An encounter with Wagner’s music shook Chabrier to the core. In 1880 he signed out for a long weekend in order to hear Tristan und Isolde in Munich. A well-known story has Chabrier fainting from expectant emotion even before the curtain rose; he never returned to his civil service job, resigning to become a full-time composer at age 39.

The first significant result was Dix pièces pittoresques for piano, four of which Chabrier later orchestrated as a Suite pastorale. Hearing a performance, César Franck remarked, “These pieces are a bridge between our own time and that of Couperin and Rameau.” In addition to a remarkable pianistic inventiveness, the ten Pièces pittoresques marked a point of departure in harmonic originality comparable to that of Chabrier’s slightly younger contemporary, Fauré; both composers would point the way to Debussy’s flowering a decade later. España, appearing with the Lamoureux Orchestra in 1883, made Chabrier instantly famous; its bright orchestral color was irresistible, and its brash harmony is still refreshing today. 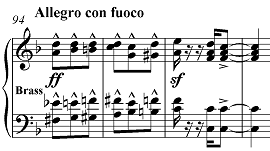 Like all of his French contemporaries, Chabrier wanted to compose opera, and he immediately tackled a pseudo-Wagnerian project, Gwendoline. The libretto, by Catulle Mendès, was feeble, but Chabrier fortified it nevertheless with lovely music, including a powerful overture clearly influenced by Wagner but inimitably his own. Gwendoline was produced in Brussels in 1886 for a brief run; a year later, Chabrier completed a full-length comic opera, Le roi malgré lui (sometimes translated as “The reluctant king ”) and this had two successful performances before the opera house burned down. This opera is generally considered Chabrier’s masterpiece; Ravel said he would rather have composed Le roi malgré lui than the entire Ring des Nibelungen.  The music of Le roi is superb in excerpt, but the opera as a whole suffers from an excessively complicated libretto which has thwarted many producers. One elegantly witty pendant to that year, 1887, was Souvenirs de Munich, a set of five quadrilles for piano four hands, sur les thèmes favoris de Tristan et Iseult, as the title page ran.

Chabrier worked on another opera, Briséis, but completed only one act. His later years were occupied with shorter pieces, including a well-known Joyeuse marche, some lively songs on animal themes (Villanelle des petits canards, Pastorale des cochons roses, etc.), and a scintillating ten-minute piano solo, Bourrée fantasque, which is sometimes heard in an orchestration by Felix Mottl.

My personal favorite of Chabrier’s works is the set of Trois valses romantiques for two pianos (1883), which I have performed several times with friends. I was happy to find a YouTube audio of a very good performance by two Italians [HERE]. There’s a nice historical note to this effusive, over-the-top expressive work: in Rome in 1885, the 22-year-old Claude Debussy, fresh from the Conservatoire as the Grand Prix de Rome of 1884, joined his fellow laureate, Paul Vidal, the 1883 winner, in a visit to the 74-year-old Franz Liszt, and played the Trois valses romantiques for him.  (What did the old thunderer, who was writing pieces like Nuages gris and Unstern at the time, think of this utterly non-German music?) A few years later, in 1893, Maurice Ravel and Ricardo Viñès, both 18 years old, played the waltzes for Chabrier himself in his apartment. Chabrier was pleased, but his health was already failing; a year later he was dead from “general paralysis,” a polite term for tertiary syphilis, at the age of 53.

Chabrier’s double tragedy was the late beginning of his mature career, and the rapid premature death at the height of his powers. What could have been operatic successes in their own time were frustrated by events. As E. B. Hill remarked about the wit and vigor of Chabrier’s style, it was too bad that Massenet and not Chabrier lived to compose a Rabelais opera (Panurge). The Rabelaisian quality of Chabrier’s optimism radiates through every page of his music. For those unfamiliar, to get you started I recommend a selection of orchestral works recorded by the Detroit Symphony conducted by Paul Paray (Mercury Living Presence); a Vox Box set of Chabrier’s complete piano music; the operetta l’Étoile (EMI 0946 3 58688 2); a biography by Rollo Myers (1969) and a shorter one, in French, by Francis Poulenc (1961).