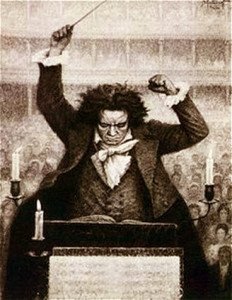 A BMInt reviewer on temporary hiatus, I got my start in music criticism in the classical music department at WHRB as an undergraduate, and loved my experience there enough to have returned occasionally to do broadcasts.

So, BMInt critics and readers, what are your desert island Beethoven piano sonata recording nominations? Please cite as many specifics as you can (Claudio Arrau, Alfred Brendel, Wilhelm Kempff, and Daniel Barenboim each did more than one complete cycle, for example). Bonus points will accrue if you can provide a link to audio available through YouTube, Spotify, or some other streaming service, and especially if you can provide some specific thoughts about what’s vital about that performance.
James C.S. Liu is a physician by day and a baritone and music enthusiast by night. He lives with his wife and daughters in Cambridge, Massachusetts.