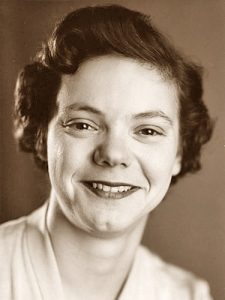 “Become a musician only if you have to” was a half-serious quip from Doriot Anthony Dwyer, who died yesterday in Kansas age 98.

Born in Illinois in 1922 and a distant relative of suffragette Susan B. Anthony, Dwyer served as principal flute in the Boston Symphony Orchestra for almost 40 years. Having learned flute from her mother — “she used the instrument to sing, and had a huge, beautiful sound,” Dwyer attended Eastman, earning a bachelor’s degree and performer certificate. (Color details herein are drawn from online accounts by former Boston Globe critic Richard Dyer, local musician and music historian Susan Fleet, British music commentator and blogger Norman Lebrecht and his readers, scholar K.E Kean, and more.) Precocious at 12, Doriot began studying with Ernest Liegl, traveling five hours to Chicago twice each month for five years. At his recommendation Dwyer applied to Curtis, but she was rejected. At Interlochen that summer, Eastman head Howard Hanson offered her a scholarship. At Eastman she developed sufficient skills to win second flute with the National Symphony. After two years with the National Symphony, Doriot studied with William Kincaid, principal flute of the Philadelphia Orchestra. In 1945 she moved to New York to freelance, among other gigs playing in a jazz band behind Frank Sinatra. “Sinatra was really an artist,” she said. “Good jazz singers are true artists: they never do the same thing twice.” The next year she played in an orchestra for a ballet troupe, but the tour folded in Dallas. She took a train to Los Angeles. Six months later she was playing lucrative jobs in recording studios, being a fine sightreader. She auditioned for second flute in the LA Philharmonic and held the position from 1946 until 1952. Bruno Walter named her principal of the Hollywood Bowl Orchestra, a radio orchestra similar to the NBC Symphony, whose repertoire was difficult and schedule demanding.

In 1952 the BSO announced auditions to replace retiring principal flutist George Laurent. To avoid any confusion about her gender Doriot signed her application “Miss” Doriot Anthony. BSO conductor Charles Munch decided to hold a “ladies’ day” audition. Doriot described her invitation to audition for the BSO as “the greatest thrill of my life.” She went into heavy training. The audition lasted more than three hours. Arthur Fiedler asked for the flute solo from Grieg’s Piano Concerto. Doriot played it from memory. After a while, she played everything from memory. “What do you want to hear?” she asked, “I’ll just play it. …  They were knocked out by that,” she later said.

They asked if she planned to have children. She did, but told them it was none of their business. When they asked her to come back in two weeks and audition again, she said no. Two months later the offer came, but it said nothing about money. Told she would get the usual sum, Doriot asked for more and got it. “It’s a lot of money for a little girl,” said the BSO manager. To which Doriot replied: “It’s a big job.”

She was only the second woman to win a principal chair in a major US orchestra.

“I encountered more prejudice in the press than I did in the orchestra.” Local newspapers in 1952 reacted to the appointment: “Woman Crashes Boston Symphony: Eyebrows Lifted as Miss Anthony sat at Famous Flutist’s Desk”; “Flutist, 30 and Pretty, Here with Boston Symphony.” One noted that she dressed unobtrusively, in a long-sleeved floor-length black dress; another said she “dressed well without aiming at spectacular effect, and her lipstick, though generously applied, is the right shade for her coloring.” Approached by a reporter in 1952, she said: ‘Gradually, during my life, I’ve got used to the idea that I’m a woman.’

And here is how she sounded in a private recording in 1955 at Harvard Musical Association, when she played Busoni’s Albumblatt with pianist Gregory Tucker:

During her 38 years with the BSO, Doriot won critical acclaim for performances under Munch, Erich Leinsdorf, William Steinberg, Seiji Ozawa, and guest conductors Georg Solti and Pierre Boulez, many of them preserved on recordings.

In 1963 the Boston Symphony established the BSO Chamber Players, principal players of the string, woodwind, brass, and percussion sections. Doriot was the only woman. During the late 1980s Doriot toyed with the idea of retiring, but said: “ … I fell in love with our [woodwind] quartet … that’s why I couldn’t leave the Symphony.” When she did retire, she went out in style. The BSO commissioned Ellen Taafe Zwilich to compose a Concerto for Flute and Orchestra for her, which she premiered in April 1990.

Doriot left a legendary imprint on the Boston sound. Commenters yesterday wrote, “Not every flutist was a fan of hers — that vibrato, OMG — but like all great artists, there was never a moment when you could mistake her for anyone else.” … “I rushed backstage and introduced myself and asked her about flute performance as a career. She cautioned me strongly that it was no place for women. That was probably 1967 or 1968.” … “Like a lot of really talented people, she could also be absentminded. She once forgot her flute in the security area of Frankfurt airport and flew to her next destination without it. She never gave up trying to retrieve her instrument. Years later, … in the Tanglewood parking lot she rushed out of the car … I was horrified to see that she must have neglected to put the gear in Park and as she was talking to me, her car slowly picked up speed and glided serenely into the woods.”

And for those who desire to test their memories, we append the complete history of Dwyer as BSO soloist HERE.

Susan Fleet’s page on the flautist is HERE.