Expectations were running high in Longy’s buzzing Pickman Hall Wednesday night for the Celebrity Series debut of the Calidore string quartet when the 10-year-old award-winning foursome opened with a bang. Warming up with Beethoven’s big fugue tests hubristic illusions of readiness, and frankly the interpretation felt tentative and under-inflected. The mostly scorebound players exchanged glances more furtively than comfortably and, aside from the well-considered if reserved overture statement, the complexities of ensemble playing gave way to individual projections of parts.

Even as the gigantic single movement can withstand analysis, it also defies it. Fugues, inverted, retrograde, doubled, arias, an overtures and fughettas, it may favor us with, but relentless motion transcends this structural science. Did the Calidores clarify structure rather than give in to the chaotic and contradictory dramas? Did they give way to improvisatory impulse? Did they share confident smiles at one another’s execution? None of these to a noticeable degree. It sounded neither gritty and shocking nor elegant and controlled.

Evidently they need time to develop a collective imprint, or perhaps they should mount this mastodon later in a program.

Should we be that surprised that Beethoven’s revolutionary Opus 133 Große Fuge, from 1825, could sound more modern than Anna Clyne’s 2020 Breathing Statues, which the Celebrity Series co-commissioned in homage to Opus 133? Parodistic and hortatory rather than adulatory, it almost literally retold Beethoven’s sui generis drama. In many modern works claiming to be quoting earlier sources, we struggle to find the allusions. Not so for Clyne’s; she revives Beethoven’s riffs and then fractures them with easy-listening bluesy slides as well as snippets of Bruch’s Kol Nidre and Mendelssohn’s early “Muss es sein?” which both he and Beethoven set in quartets. Which ditty, by the way, carries no metaphysical freight.

The namesake poem, by contrast, Rilke’s “An die Musik,” emits a bracing draught from the philosopher’s well. As sober sophomores, we used to read him out loud; his verses drugged us.

Music. The breathing of statues. Perhaps:
The quiet of images. You, language where
languages end. You, time
standing straight from the direction
of transpiring hearts.

Feelings, for whom? O, you of the feelings
changing into what?— into an audible landscape.
You stranger: music. You chamber of our heart
which has outgrown us. Our inner most self,
transcending, squeezed out,—
holy farewell:
now that the interior surrounds us
the most practiced of distances, as the other
side of the air:
pure,
enormous
no longer habitable. 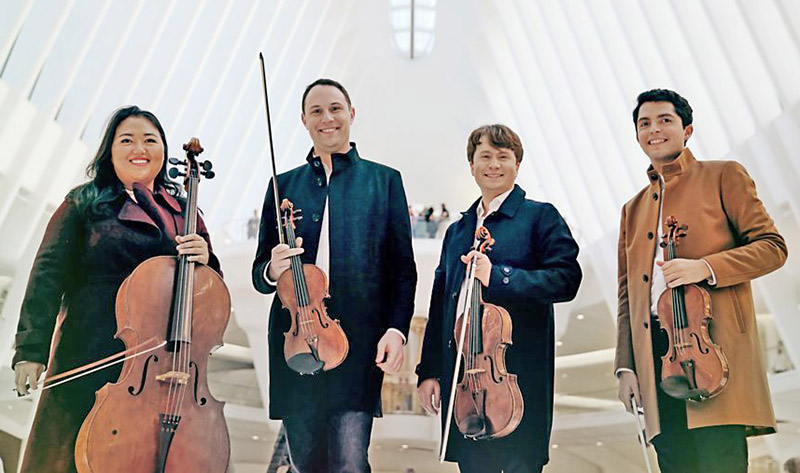 Clyne gave us a safe and digestible neo-Romantic take, substituting whimsy for whammy, and ended with an exhausted fadeout. Violist Jeremy Berry spoke beforehand of the composer’s “pregnant pauses”: “She wants us to come in when it feels right,” yet the traversal felt more plotted than impulsive. It also transported us into the rarefied realms of polished quartet execution, erasing some of the doubts we’d been left with after the opener. At times, though, I had the feeling of hearing conjoined duos, with the warm and comforting Berry and the emotively bursting cellist Estelle Choi balancing the paired violinists Jeffrey Myers and Ryan Meehan. Myers’s style in the first chair, with pushy rising expressive intonation and rather overemphasized articulations, did not befriend this writer. Choi, on the other hand, made a conquest. Such forceful and heartfelt artistry she produced every time she bowed or plucked above the texture. Can science quadruplicate such a one into an ideal ensemble?

Calidore’s lived-in take on Beethoven’s Op. 59 No. 1 (Rasumovsky), which sourced upward from the cello, finally revealed the quartet’s honored ways: songful and ever surprising, generous and suave, the players got the measure of the composer, the house, and one another. The adagio molto e mesto third movement (and to some extent the entire work) gave a star turn to Choi, whose deeply felt expressivity left us misty. Then, when Myers trilled and cadenza-ed us attacca from the F minor adagio into the F major Thème Russe: Allegro, we were all ears, for his mini-concerto moment. The ensemble, bits firmly in cheek, detoured from the racecourse into a chivalrous field for a wild and glorious ride. With a little bit of everything, this never boring movement took quick turns around blistering unisons, heartbeat pizzes, and rapid kleine fuges pausing from time to time for reflective looks backward. Heiliger dankgesang.

Via golden disc on Voyager, the Cavatina from Opus 130 is conveying the affecting sadness and creative genius of the human race into interstellar space for an eternity. Great performances lift us from earthly bounds. In this well-earned encore, Choi especially shone satisfying spiritual rays on all.

Comments Off on Ludwig Again, and Young Admirers