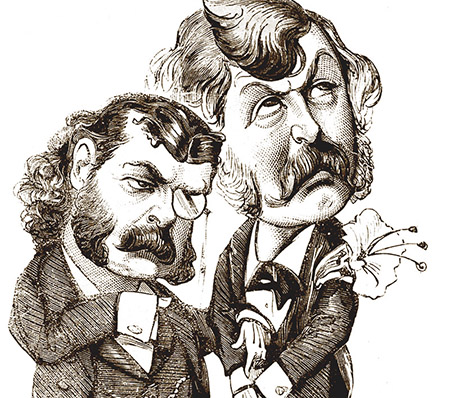 Sudbury Savoyards kicked off its 59th season with six spirited performances (concluding February 29th) of H.M.S. Pinafore, or the Lass that Loved the Sailor, the 1878 operetta that launched Gilbert & Sullivan to international fame. Founded in 1961, the Sudbury Savoyards combine local (auditioned) soloists with an un-auditioned chorus of singers from the community, and Pinafore is a staple of their repertoire (earlier productions in 1974, 1983, 1989, 1998, and 2011). They are a community-oriented all-volunteer organization that has evolved from its roots at the Sudbury United Methodist Church into an independent 501(c)(3) organization. Their Leap Day performance included a special toast to Frederic on his 41st birthday, along with the singing of “Hail Poetry” in his honor. Both the Valley Light Opera (Amherst) and the Troupers Light Opera (Riverside, CT) held Pirates singalongs on the same day.

Leap Day is a particularly celebratory occasion for lovers of the 14 collaborative comic operas of Sir Arthur Sullivan (1842-1900) and playwright/director William Schwenck Gilbert (1836-1911). One of their most memorable tenors (Frederic, from The Pirates of Penzance) was born on February 29, 1860. His indenture papers specified that he would be free on his 21st birthday… which unfortunately did not occur until 1948 (there was no Leap Year in 1900, and Isaac Asimov published a detailed paper on this issue).

The original London production of Pinafore ran for over 570 performances (the second longest of any musical theater work at that time). Its success spurred the authors to license amateur troupes to perform authorized versions of their works (over 200 such groups in England before World War I). From the beginning, many G&S companies donated a large amount of their proceeds to charity: Sudbury Savoyards have donated more than a quarter million dollars to world hunger relief in the past three decades.

British copyrights (which did not expire until 1961) were not enforced in the U.S. at the time of G&S premiere performances, so most Americans did not pay royalties to the authors. The first (unauthorized) American production of Pinafore was presented on November 25, 1878 at the Boston Museum at 28 Tremont Street: when that house closed in 1903, it was the oldest stock theater company in America. Russ Sype has put together a fascinating two-part documentary on early American performances of H.M.S. Pinafore HERE.

Sudbury’s choice of subject was particularly appropriate for our emotionally charged pre-election season, as Pinafore’s convoluted story pokes fun at the process of rising to a position of authority, often without qualifications (especially within the Royal Navy and the English aristocracy). Gilbert’s father had worked as a ship’s doctor in the Royal Navy: although Gilbert denied it, the character of Sir Joseph Porter was seen as a spoof of W. H. Smith, the new First Lord of the Admiralty who had no military or nautical experience. Gilbert also re-purposed three characters from his earlier “Bab Ballad” poems (Dick Deadeye, Ralph Rackstraw, and Little Buttercup).

Building on a theme introduced in the G & S 1877 operetta The Sorcerer, characters of different social classes fall in love and their perceived social statuses count more than job qualifications. While Pinafore can be presented as a naive, simple romance, Gilbert’s witty, rhythmically engaging lyrics elevate the story and require a refined, restrained approach to humor.

Arthur Sullivan followed the plan of the romantic “number opera,” only later incorporating Verdian touches into his harmony and attempting a more through-composed style (as in Pirates). Sullivan’s holograph of the orchestral score is just a copying master with revisions; it is without text, doublings, rests for empty measures, or stage directions, and is held by New York’s Pierpont Morgan Library [HERE]. The first edition of the piano/vocal score is available in digital form is HERE.

Baritone Mark Bonito (playing the sailor Dick Deadeye) and soprano Janet Pohli (as Josephine, the Captain’s daughter) were the vocal standouts of the production. Mark Bonito chewed up the scenery with his dour portrayal of Deadeye, a Cassandra-like character who sings several crucial recitatives in the first act and a minor mode duet warning the Captain that his daughter may be eloping (“Kind Captain, I’ve Important Information”). He firmly anchored the final quartet (“Oh Joy, O Rapture Unforseen”) in the second act finale and was a convincing, menacing presence that kept the drama moving throughout.

Pohli has a beautiful, ringing tone and her two bel canto arias were emotionally and artistically satisfying. In “Sorry Her Lot,” (labeled “Ballad” by Gilbert) Josephine laments that her social status conflicts with her heart’s desire (Ralph, a sailor on the H.M.S. Pinafore), poignantly descending through short minor scale passages arranged to ascend to a top B-flat, which she sang without effort. Her fiery showpiece “Refrain, audacious tar!” evoked the fanfare-like arpeggios of Handel and Mozart: here she traded vocal jabs with Ralph (ably sung by tenor Peter Boettcher) and displayed a brassier, more haughty tone.

Maintaining the tradition (from Gilbert’s own original direction) that characters not be aware of the absurd situations they inhabit, Brad Amidon played Captain Corcoran with hilarious aplomb and self-assured calm. His introductory recitative and aria (“My Gallant Crew, Good Morning”) presented the audience with a lifelong officer, fully convinced of his command. As the plot developed and his authority was undermined by the jovial Sir Joseph Porter, Mr. Amidon seemed to physically recede onstage, and his sweet “Fair Moon, to Thee I Sing” drew tears from the audience.

Mezzo soprano Ann Ferentz leant an acerbic edge to Little Buttercup (a tradeswoman from Portsmouth), who eventually proves responsible for “baby farming,” the undoing of the Captain’s position, and the success of two romantic relationships. She was an important presence throughout both acts in keeping up the intensity and speed of the dramatic action; her “Things are Seldom What They Seem” and its resolution, “A Many Years Ago” were crystal clear, and set up many of the funniest and most enjoyable reactions from sailors onstage.

The orchestra showed remarkable flexibility, as Sullivan’s recitatives in this period require attention from the conductor and have enough richness to warrant the inclusion of winds. The large ensemble was made up of thirteen strings, six woodwinds, six brass, and two percussion (including timpani). The music direction was shared between Kathryn Denney and Lindsey Soboleski.

The overture for H.M.S. Pinafore was actually composed by Alfred Cellier (1844-1891), the musical director who led both the 1878 London and the 1879 American premiere. As in his later overture for The Pirates of Penzance, Cellier based his music on themes by Sullivan. Cellier returned to the U. S. in 1881 (conducting his three-act grand opera Pandora in Boston) and 1882 (conducting four English operas in New York). A lengthy interview with both Gilbert and Sullivan about Pinafore and their work together during this period appeared in the New York Herald (November 6, 1879) HERE

After the New York opening, Arthur Sullivan traveled to Boston to lead his oratorio The Prodigal Son, and many more successful collaborations with Gilbert followed.

Sudbury’s naturalistic design (by Laurel Martin) included a two-story set piece on stage left depicting the aftercastle (also called the poop deck) of a ship, with a prominent helm above a door to the captain’s quarters. For the original 1878 production, Gilbert made sketches of the H.M.S. Victory and the H.M.S. Vincent in Portsmouth. The H.M.S. Victory was Admiral Nelson’s flagship, and is now in dry dock at Portsmouth, preserved as a museum; it is the world’s oldest naval ship still in commission [HERE].

Costume designers Sue Flint and Donna Roessler provided color and humor through their rainbow of subdued dresses for the women’s chorus. The variety of naval costumes clearly indicated ranks, positions, and changes in status, enhancing the clarity of Gilbert’s convoluted plot. The Sudbury Savoyards maintains a large collection of historical costumes which can be rented by other troupes who may not enjoy such a rich history of dedication to these works.

The MIT Gilbert & Sullivan Players offered excellent fully staged productions from 1988-2018; this group has evolved into the community-based Savoyards of Boston, offering “Sing-thrus” of Ruddigore and Pinafore in 2019. The Harvard-Radcliffe Gilbert & Sullivan Players has been presenting two full productions per year since 1956: their 2019 shows were Gondoliers and Pinafore. The Yale Gilbert & Sullivan Society was founded in 1971 (David Hyde Pierce ’81 and Victoria Clark ’82 were alums), and then re-founded in 1988 by students, many of whom are now active in the Boston musical community; it presented semi-annual shows until 2013.

New England supports several excellent community-based companies focusing on the Savoy operas, and NEGASS (the New England Society of Gilbert & Sullivan) acts as a clearinghouse for local performances. They publish a newsletter up to six times per year, run educational programs for the Greater Worcester Opera, organize G&S singalongs, and maintain Facebook page of Boston-area events.

Both groups use elaborate sets and costumes accompanied by a full orchestra, and both will present The Pirates of Penzance in Fall 2020. Boston’s new Yorick Ensemble presented a scaled-down version of Pirates for its inaugural production last Fall, and will hold a cabaret fundraiser on March 30, 2020 at Club Cafe in Boston.

The Connecticut Gilbert & Sullivan Society (based in Middletown, CT, founded in 1980) presented Thespis in 2019 and plans a production of Ruddigore for October 2020.

The Simsbury Light Opera Company is the oldest Gilbert & Sullivan Society in New England; their upcoming 75th annual production will be (you guessed it) The Pirates of Penzance from March 28-April 5, 2020.